From couple of days my HDD works slow. So i test my HDD using disk utility. It shows i have 1352 bad blocks. 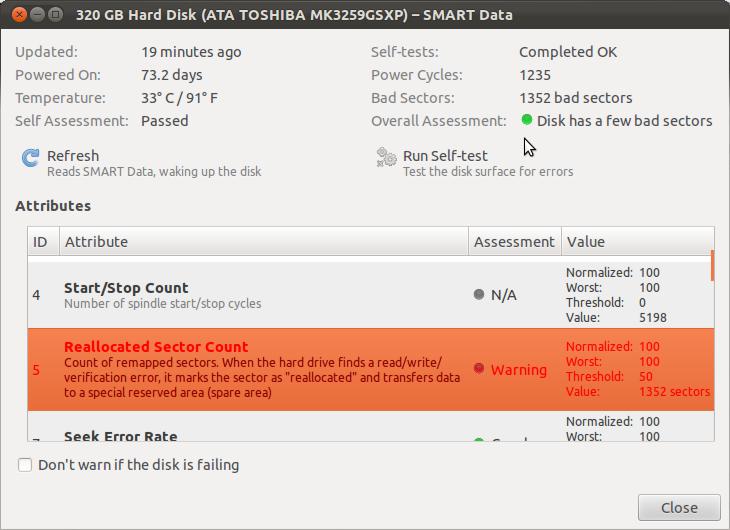 SMART test says HDD health is good but shows a error "Reallocated Sector Count". So i run #badblocks. But it shows 0 badblocks 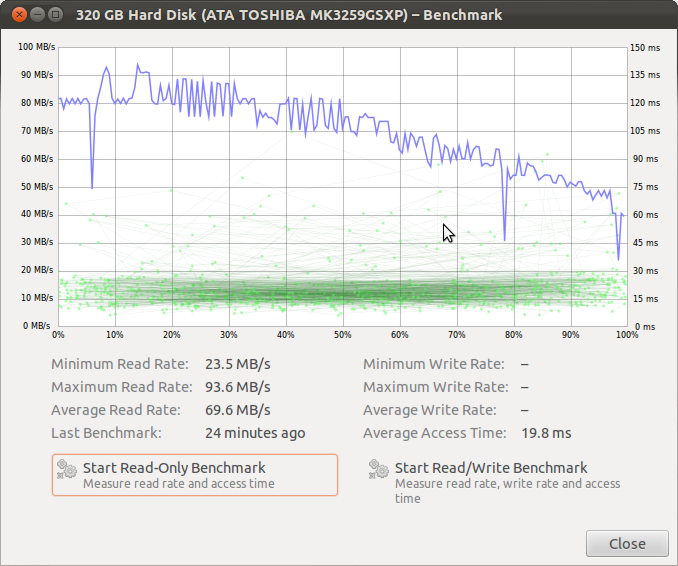 Here it shows read/write speed is 69.6 MB/S but hdparm shows 759.55 KB/sec, SMART says HDD has bad sectors but badblocks say there are no bad sectors. I am so much confused. I had already submit my laptop for HDD change(valid warranty), but they refused to change it and they said there are no bad sectors(They used windows's tools). But HDD performance is poor.

There should be any way that we can prevent SATA controller to reallocate bad blocks. Then we can find out the bad blocks and mark unused by fsck. After that enable reallocation again. So ubuntu will not call for bad sectors and reallocation will be zero and also it reduce the rate of new bad sectors.

I agree with StarNamer's comment. The bad blocks are substituted by the firmware on the drive, so ideally the operating system doesn't know about the bad blocks (except through S.M.A.R.T.) The number of reallocated sectors does seem high to me for a disk as young as yours.

Disk throughput depends upon the size of the data reads and writes and its location on disk.

You may wish to Run the self-test in the main window above to see how it does.

It may be prudent to find tools that access S.M.A.R.T. under Windows and quote its findings should you resume the conversation with your vendor. That will show the remapped sectors. The S.M.A.R.T. data is information from the disk controller and therefore will be the same for Ubuntu and Windows.

Not the answer you're looking for? Browse other questions tagged hard-drive smart or ask your own question.

12
Is this drive failure or something else?
11
What to do if Disk Utility shows bad sectors pending in SMART?
7
HDD performance is slow in ubuntu
3
SMART says disk failure is imminent due to bad blocks, what do I need to do?
0
Assessment is “failing” under id 5, Reallocated Sector Count, whose value comes out to be 561 sectors
0
Cannot partition 3TB drive with GParted
1
Can't see SSD hard disk after install Ubuntu 18.04 on HDD