How to dualboot Ubuntu on Asus Zenbook UX32VD?

I have just purchased a Asus Zenbook UX32VD and it will arrive on Monday. However, I do not know how to dualboot Ubuntu on this, because of two reasons:

What steps should I follow to dualboot Ubuntu on this correctly? Will this cope with the HDD+SSD hybrid technology?

Yes, I realise the question is old, but is also one of the first Google results when searching dual boot on this machine.

As the iSSD is used as a cache by Windows, you don't want to install Ubuntu there unless you disable the Windows cache.

As the comment on your question says, the hdd is not cached like that of the Seagate XT drives, but is two distinct drives: ssd on the motherboard, and hdd. Windows is set up to use the SSD as a cache.

You have a couple of options:

Either way, you'll want a swap on the HDD (on the SSD will kill longevity) as well as a dedicated Linux data partition - Ubuntu can read/write ntfs, but is generally not a good idea to take that for granted.

Here's some partitioning advice - when creating partitions, Linux will need at least / and swap ( or you can use a swap file). It's generally considered a good idea to also have a separate data, or /home. This is for a couple of reasons: if you need to reinstall the OS ( and this goes (especially?!) for Windows as well), you don't then have to go backing everything up and transferring hundreds of GB of data, and; if you fill the data partition then it won't mean a lack of space for Linux to do its required operations in /, in which case it might fall over in a heap. Some Linux admins will advocate having separate /boot, /usr and /var as well, and it is still not a bad idea in the server space where uptime is king, but it's less essential on the desktop.

If it's your first foray into Linux, I'd suggest keeping the /home partition small to begin, and at the end of the drive so it's easier to resize later if you want more room.

When you get to the part of installation where it asks you to select a hard disk to install ubuntu on and select something else. 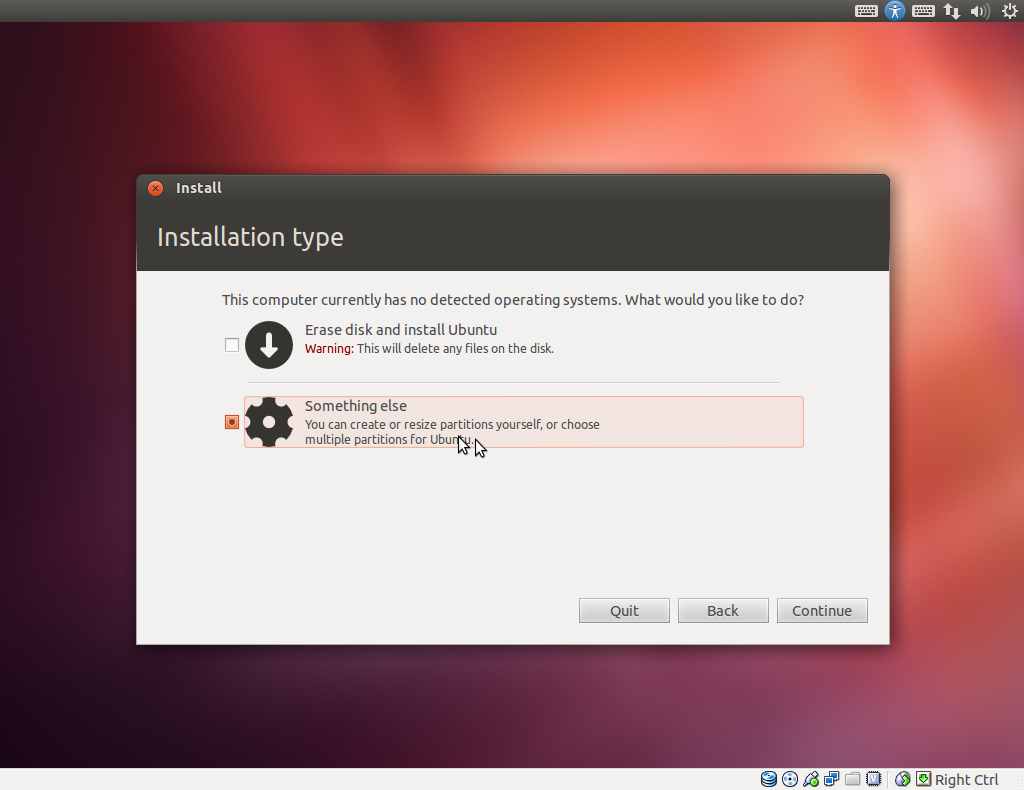 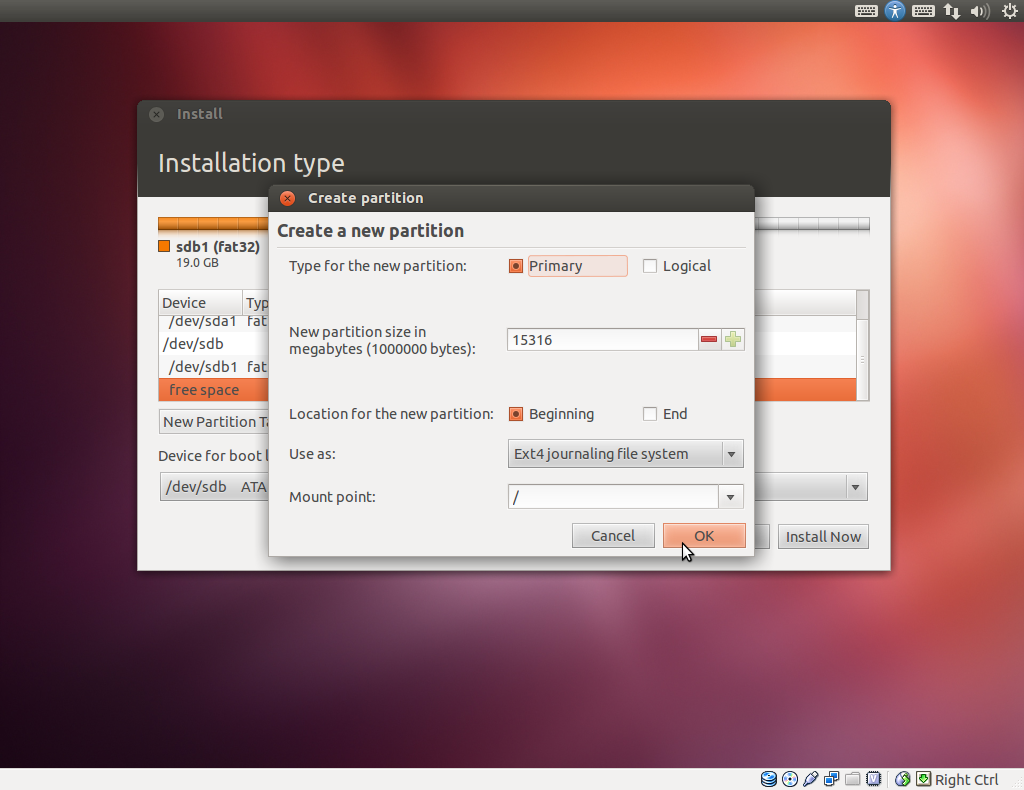 Now select your hdd and make a new partition as big as you want your data partition to be (probably not too big cause windows needs a lot). 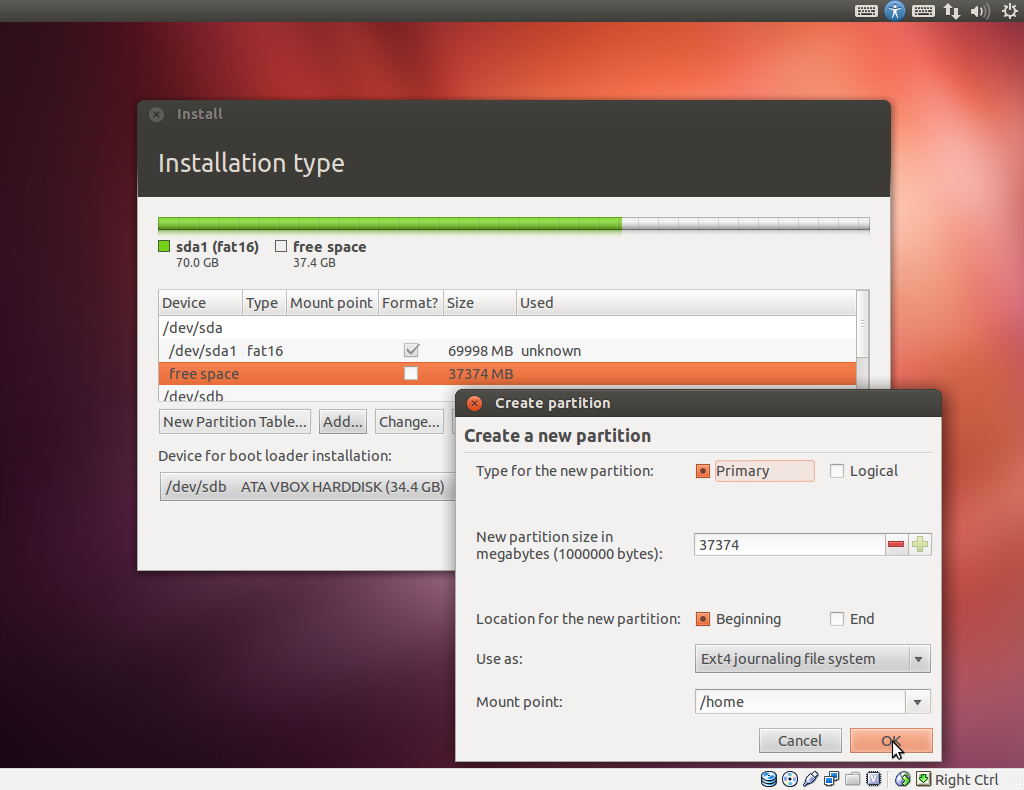 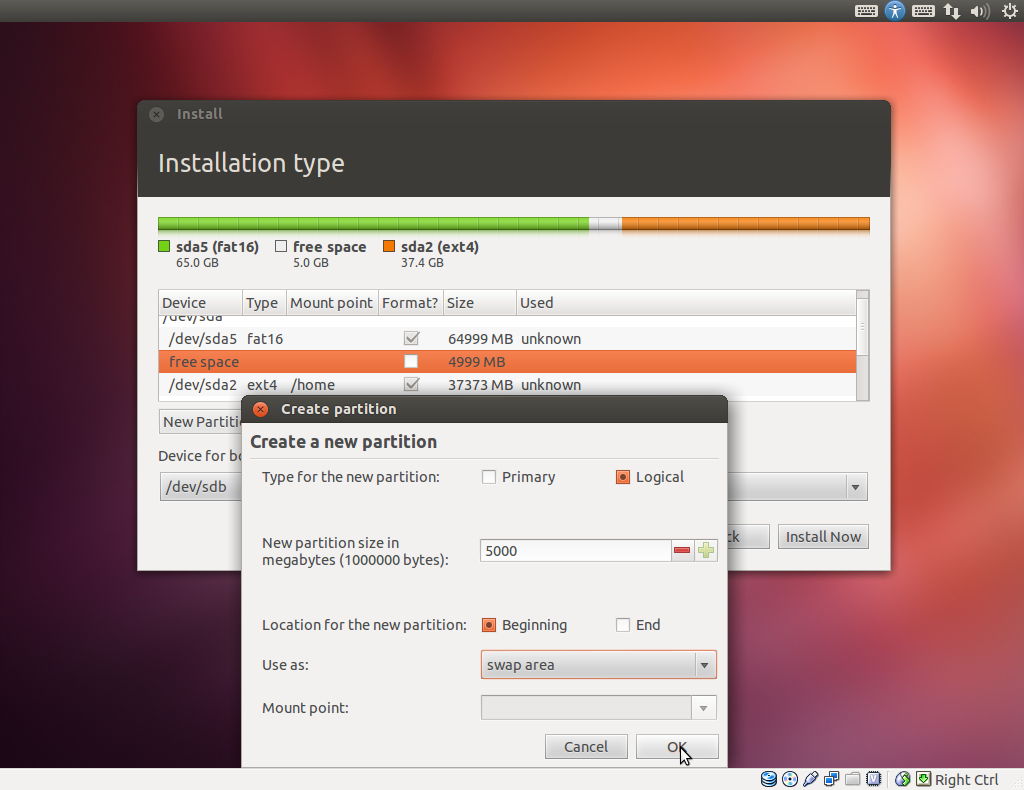 Ubuntu doesn't have to be smart. It's you who decide where you want your Ubuntu installed, in 500G HDD or 30G SSD.

You need to know which partition is the one where you want to install Ubuntu, then within the Ubuntu installation you should choose that partition, choosing that you want Ubuntu runnin along Windows.

After that, everytime you boot your laptop, you'll be giving a menu (GRUB) so you can choose what Operating System to boot.

Because you don't have an optical drive you can boot Ubuntu from a USB pen or install Ubuntu from within Windows.

Just as I see the ssd is almost empty my machine boots after I formatted it, but I yet have not been able to boot the linux from ssd, I got the latest 32vd with W8 though.

Not the answer you're looking for? Browse other questions tagged installation dual-boot or ask your own question.