Can I use a Bash alias in a keyboard shortcut?

Is it possible to use an alias within a custom shortcut?

For example, suppose I have the alias

Can I create a custom shortcut that binds Ctrl+Alt+C to cal?

I have tried but it doesn't seem to work.

Yes, you can. You just need to ask the command for an interactive shell.

Let's say your alias is:

Your shortcut command must be: 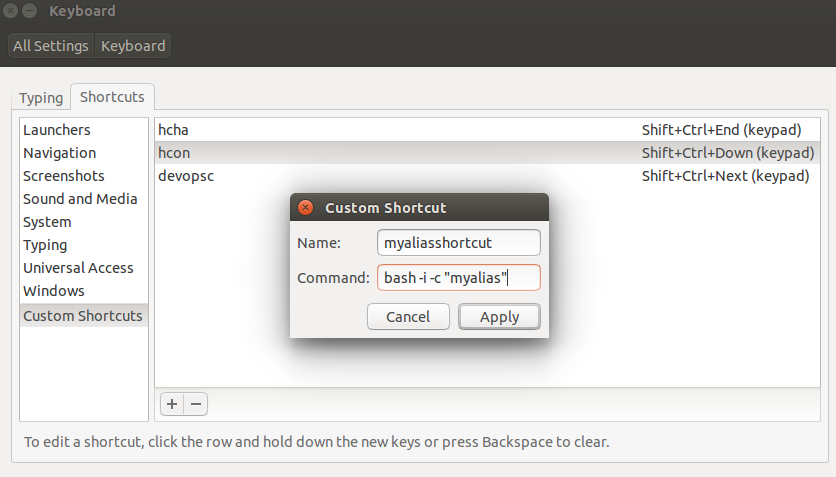 No, the commands run by keyboard bindings are not parsed via a shell. Your best bet is to create a directory bin in your homedir (mkdir -p ~/bin). Write a script named cal that runs your command, save it in ~/bin and make it executable.

If you didn't have a bin directory in your homedir already, you need to log out and back in again for it to be added to your PATH. Once that is done, binding a keyboard binding to run "cal" should do what you want.

a quick alternative, in case it helps anyone in the future

to add a "Save Image As.." keyboard shortcut to Chrome as Shift-Ctrl-S

also, if you're organized enough to keep a separate file with your shortcuts & then sourcing it at the end of ~/.bashrc for example, the following works & can comes in handy ;)

content of the "/tmp/keyboardShortcutsFcns" file from the above example:

Not the answer you're looking for? Browse other questions tagged bash shortcut-keys alias or ask your own question.

15
How to create a shortcut that executes an xdotool command to simulate a key press?
0
How to enter email adress pressing function key