I have been using Firefox for a long time in Ubuntu, I downloaded some add-ons but it made firefox extremely slow, even if I remove them nothing will change.

I tried to remove Firefox also, but re-installing it will somehow recover the same Firefox I had- it seems it write some info somewhere that even if you remove Firefox, it will keep them.

Moreover, I am not able to use see any flash videos or website with Firefox(chrome works fine).. Honestly I tampered with plug-in settings in Firefox that this happened. But right now I can't do anything to overwrite the setting...

My question is how I can remove Firefox in a way to remove any previous traces and re-install a new version like for the first time?

Delete Firefox and all it's data:

I think this can be done in six easy steps, please edit my answer - or tell me to - if it's not complete:

Run type firefox. You will either get

Apt and snap are ways to install packages. (package managers) If the answer is apt, follow these steps . Steps for snap are after it.

Mind the periods in front of file- and directory names: They indicate a hidden directory. You can tell your File Browser to show them by pressing Ctrl+H.

The 4th and 5th step must be done with superuser privileges. To start a the File Browser as a superuser, press Alt+F2 and enter gksu nautilus.

Finally, restart your computer to get rid of all temporary files. This should remove all traces of firefox ever being there.

All the answers given so far are way too drastic. You don't need to apt-get purge firefox or rm -rf ~/.mozilla to get what you want.

Here's the thing. Firefox doesn't store any user data in itself. What it does instead is create what's known as a "user profile" -- a directory in your home directory -- and store all your data in there. And by data I mean everything -- add-ons, themes, browsing history, stored passwords, and on and on. (The actual location of your profiles in the filesystem varies by OS; on Ubuntu and other Linuxes, it's generally in .mozilla/firefox in your home directory.) Data in the user profile is completely separate from the Firefox application itself, so removing Firefox via apt-get or the like won't delete the profile data; when you reinstall Firefox later, it'll just look up your profile and reload it all, which can be frustrating if you don't realize what's going on.

When you first use Firefox, it silently creates a default profile for you, and uses that profile from that day onward. But you don't have to use that profile. Firefox supports multiple profiles, and you can switch back and forth between them at will. This means that to get Firefox back to the way it was the day you first installed it, you don't have to touch the Firefox binaries at all -- all you have to do is create a new, empty profile, and use it instead of your old, cluttered one. Restart Firefox and it'll be like you never ran it before.

Here's how to create a new FF profile in Ubuntu: 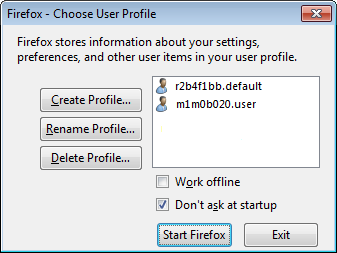 Yours will probably only have one profile listed -- that's your current, default profile, with all your add-ons and other stuff. It'll have a name that starts with a string of random characters; that's because FF had to come up with a name for it when it automatically created the profile, so it just used a random string.

Now Firefox will restart, completely fresh and new as the first day you downloaded it. Problem solved. And if you ever need to retrieve something from your old profile, like your old bookmarks, say, all your old data is archived in your old profile, so you can safely retrieve it later.

You can try to delete the ~/.mozilla folder which contains all the browser's settings.

First of all, remove Firefox and all of its configuration files by typing in:

Also, make sure that the ~/.mozilla directory (which contains Firefox' configuration files) is deleted:

It might even not be necessary to reinstall Firefox, just remove the ~/.mozilla directory (step two) and restart Firefox, and it should be just as if you just installed it.

This will do the whole trick, removing all packages and files,

"autoremove" purges everything that once was needed to install or run a program.

Also remember to update or dist-update (this last one is my favorite), after you removed firefox or any other software. Some users recommend doing a simple update before removing or installing programs.

Run type firefox. You will either get

Apt and snap are ways to install packages. (package managers)

You only need to type:

and then type y for "Yes", and Enter

That took care of everything. Firefox is now off of my computer and Google Chrome is doing a great job.

I want to give my laptop to my mother (and yes, my mama will use Ubuntu! :P), so I wanted to make a fresh start for Firefox, and in ubuntu-14.04, I did this:

Not the answer you're looking for? Browse other questions tagged firefox uninstall or ask your own question.