I want to record and save say, music being played on my i-pod ,to my PC.
Is this do-able?

I was thinking if it can be done by connecting my i-pod's line-out to the line-in of my PC.

If any CLI or packages available for this?

Any help will be appreciated

This can be done for both analogue and digital audio input sources. I have done this to convert old analogue music tapes to digital files via the PC. It is relatively simple to achieve, and will be even easier if the device you are recording from already is digital. (Although could you just transfer the tracks from your ipod to your PC?)

Anyway, you need a 3.5mm to 3.5mm male to male audio cable (it is the same at both ends-i.e it has the standard headphone jack at either end). Install audacity from the repositories and start it running. Now connect the cable to your device and plug the other end of the cable into the pink (mic) socket on the PC. In audacity, adjust the volume of input (mic) until it is about the setting on the screenshot below (or less if you get distortion) and set the input to pulse:Mic:0. Now switch on your device connected to the computer, and adjust its volume as necessary. Then press record in audacity and you will get a waveform if you are successfully recording. Depending on your audio hardware, you may need to use other settings.

If you want, you can stop the recording after a few minutes and press play in audacity to see if the volume level is ok, and then restart a new recording. Audacity has some noise removal plugins, but you will only need to use those if you also decide to connect say a non-digital player and record from it in the future. If you have the proprietary codecs installed on your system you will be able to export your recording as mp3 and other formats. See audacity>file>export> and choose your settings.

Here is a useful screenshot of my particular settings: 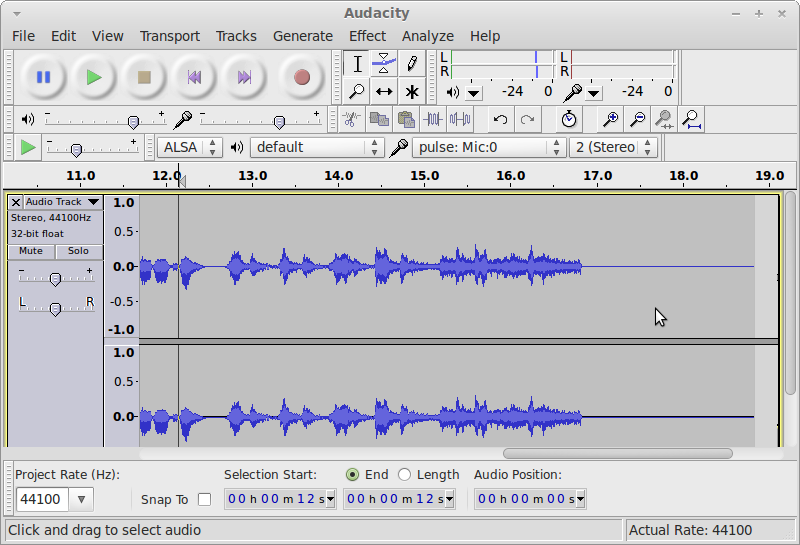 Not the answer you're looking for? Browse other questions tagged sound command-line or ask your own question.

140
How to record output to speakers?
2
Mic picks up all system sounds (including game sounds)

8
USB Audio Device Loopback Through Speakers
24
Connect to bluetooth device from command line
12
capturing video from webcam and saving to a file
41
How to record any internal sound in and out using Ubuntu and Audacity
1
Unable to record from USB sound card line-in connector
1
Caught in loop and need to save files using command line to external harddrive
0
messed with my audio settings and now I can't record sound while recording my monitor
1
How to check from command line if audio file has any sound
0
How to get line from a file using line number and edit it easily?