Which partition should I install on on a Dell XPS 13?

I just bought the dell ultrabook xps 13, but I have some difficulties to install ubuntu 12.04.

Problem is about Hard-Disk partition. Actually, the sda has already 4 part :

and I don't want delete the wrong part ...

This is the information from windows :

I think I should avoid to delete windows7 or RECOVERY, then it's between sda1 and sd4. Fact is that I don't know what is OEM and hibernation seem pretty useful ...

If you have an idea or informations, thanks for your help :)

OEM is the partition that stores the bootmanager of windows 7. This drive enables you to boot from restore partition. (This occurs when you insert recovery disk)

You are correct you should not delete sda2 or sda3.

Thing I would recommend.

NOTE: According to screenshot you are installing GRUB in sdb, make sure its correct

Here is the partition scheme of mine (dell xps 15) 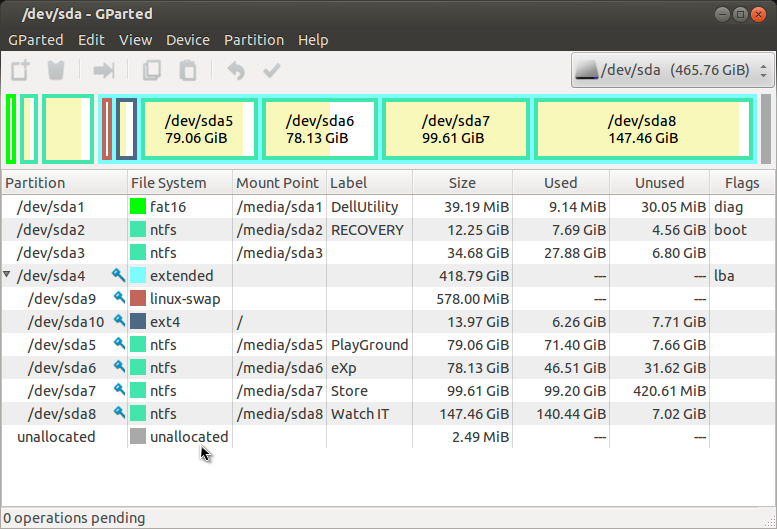 I have tried this and yes it works smoothly, no problems with the dual boot. Here is procedure that I adapted:

From the image sda4 is 8.5 GB so you can reserve 2 GB for swap space and remaining for ROOT / partition.

From the above image MENU , you can select that sda4 partition to be deleted ( don't worry just for allocation process), which will later show as unallocated , then ADD the Unallocated partition and set the SIZES to create swap and Root "/" (ext4) partitions .

From the last drop-down Bootloader menu option select SDA not sdaX for installing Grub . And you are good to go.

Note : Avoid storing large sums of DATA in Ubuntu home partition , you may run out of memory soon enough :)

Not the answer you're looking for? Browse other questions tagged installation partitioning dell xps or ask your own question.

1
Installer doesn't display partition I want to install to
0
Partitioning with Windows 7, no free space
1
Is there any possible (and simple) way to delete my Windows partitions and extend my Ubuntu partitions?
0
resizing partitions
0
Install Ubuntu 12.10 on UEFI along Windows 8
4
How to copy /sda3 to /sda1? UUID's can't be similar
0
The volume boot has only 40mb disk space remaining
0
How do I partition using the Lubuntu installer? (14.04)
0
Facing problem in partitioning in ubuntu installation ( alongside windows)
0
Unable to utilise complete harddisk space of my laptop with dual boot?