I'd like to move up and down available wireless access points, setting priorities as we can do in Microsoft Windows. I can't remember to have ever succeeded in this since using network-manager. Maybe something with conf files is possible...

Apparently in 2014 NetworkManager team introduced such a feature -- to specify priorities for different networks. There is now connection.autoconnect-priority.

This article provides lots of information on how to interface NetworkManager via nmcli.

you can list known networks and see their default priority to be 0. Now I have run

to give my home WiFi higher priority. I have the same work WiFi points available at home as well, but need to connect to HOME-WIFI when I am home. That command heavily rewritten /etc/NetworkManager/system-connections/HOME-WIFI which added autoconnect-priority=10 into [connection] section - time will show if it works as it should.

Can WiFi priority be dragged up and down in NetworkManager?

The short answer is “Not yet.” As of mid 2018, Ubuntu has nothing as easy as Microsoft Windows for setting the WiFi priority. However, there are ways to accomplish what you want.

For command line use nmcli. For GUI, plasma-nm.

Here are the currently available ways of setting WiFi priority, along with a short description of why they don't quite answer the original question.

While this solution is probably the easiest way to do it and it does work with NetworkManager, nmcli does not allow Microsoft Windows-style drag-and-drop reordering. In fact, nmcli (as the name suggests) is a "command line interface" to NetworkManager, which means you'll need to type commands in the terminal, which can be off-putting for some people. I'll describe more how to use it below.

This tool does not allow drag-and-drop reordering, but it does work with NetworkManager. Despite the name "KDE", it works with any desktop environment (I tested it with GNOME). It presents a graphical interface that lets one edit the "autoconnect-priority" of a network. I'll discuss how to use it below.

This tool does allow moving network priorities up and down, as requested. However, it is not actually integrated with Network Manager; in fact I believe it is a mistake to run both at the same time. Also, despite having a graphical interface, it is not as easy to use as it should be. Another reason to not use Wifi Radar is that it is a Python script that must be run as root, a potential security risk. Also, according to the man page, WiFi Radar is very power consuming and has "probably lots" of bugs.

GNOME network control panel (not even in the running)

I mention this more for completeness as it's what people would expect to work, but it doesn't. GNOME, which is Ubuntu's current default desktop environment, comes with a network control panel that simply cannot show or edit autoconnect priorities at all. (By the way, nmcli and plasma-nm both work fine under GNOME.)

GNOME used to have the ability to set connection priorities, albeit in a clunky way, not drag and drop. The old control panel is yet included in GNOME, but is not accessible by clicking. Instead, run the command nm-connection-editor, then select a WiFi network, click Edit, go to the General tab, and click the - / + buttons next to "connection priority for auto activation".

If you're a hardcore geek, mumble code in your sleep, all you need to do is add the line "autoconnect-priority: 10" to the file /etc/NetworkManager/system-connections/foo. See nm-settings(5).

Both nmcli and kde5-nm-connection-editor can edit individual network autoconnect priorities. Only nmcli can show you a list of all the currently set priorities. Both assume that you know that higher numbers represent higher priorities and that zero is the default. Negative numbers are allowed and work to mark a network as a "last resort" if nothing else is available (See man nm-settings and search for "autoconnect-priority".)

The changes nmcli and plasma-nm make are stored permanently by NetworkManager in /etc/NetworkManager/system-connections/.

How to use nmcli

This is my preferred solution and it already comes with Ubuntu. If you're familiar with the command line or if you have a naturally linguistic brain, you may find this solution easier than using a mouse. On the other hand, if you want to try a graphical interface first, skip ahead to the next section on KDE's plasma-nm. For all of the examples below, you'll need to open a Terminal to type in the commands.

Tip: If you have a very long list, you may want to sort them by priority:

How to set a network as preferred

Note that you can use any number you want for the priority. A larger number moves the network to the top of the list.

How to set a network as a last resort

Negative priority values are lower than the default of 0, which means they will be tried last, if no other known WiFi network can be found. Note that, due to a bug in some versions of nmcli, you may see negative numbers listed as huge positive numbers like 4294967286. Don't worry about this as it will still work fine.

Plasma-nm, KDE's NetworkManager client, lets you change a network's priority through several clicks in a graphical interface. You cannot drag-and-drop, instead you must specify a number. As with nmcli, higher numbers are higher priority. Unfortunately, you cannot see a list of what other priorities you've set in the past so you may have to guess at a number. Personally, I just use "10" for preferred networks and "-10" for last resort networks and I don't differentiate between them beyond that.

You don't need to install all of KDE just to get plasma-nm. (On my machine, running GNOME, the full KDE package would have required downloading over 600MB; in contrast, plasma-nm was only 8MB). I installed plasma-nm from the command line like so:

and I ran it by typing this:

(Well, technically, I didn't type all that. I used TAB to autocomplete the typing for me).

If you don't use KDE, the first time you run plasma-nm, it will ask you about creating a "wallet" to store credentials. I just hit "Cancel" to the question and it worked fine for me.

Then it will show you a list of connections. Double-click on the connection you want to edit. That will bring up the "Connection Editor" panel. Choose the "General Configuration" tab. At the bottom, you'll see a box labeled "Priority". Change it from 0 to 10 (preferred) or -10 (last resort). Click "OK" to save the changes. 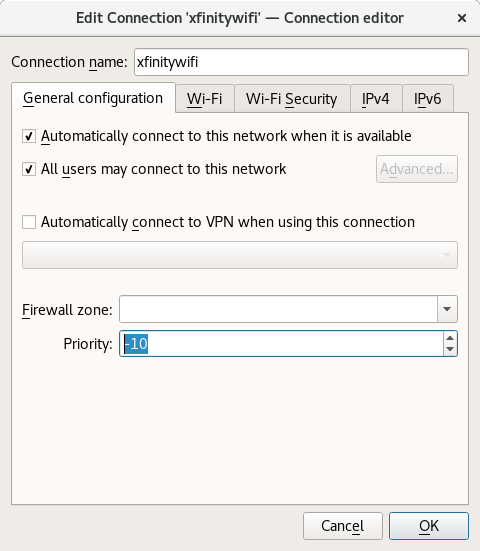 Since changes are permanently stored with NetworkManager, once you're finished adjusting priorities, you don't have to keep plasma-nm installed if you don't want to. (sudo apt remove plasma-nm)

Install WiFi Radar, just press Ctrl+Alt+T on your keyboard to open Terminal. When it opens, run the command below.

WiFi Radar has a new version 2.0 it can be downloaded from their website. Or download it from Here

Ever since the (network) settings were redesigned in GNOME, some functionality cannot be accessed anymore from the new settings interface. To use the old one, which exposes more options, run nm-connection-editor. 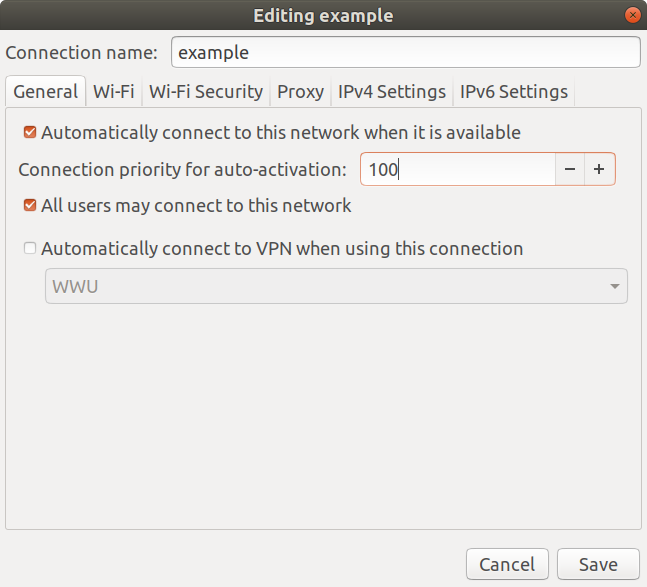 If you are using xfce, for instance under xubuntu 18.04, you can do this:

Confession: I only found this after considerable effort toward adding the feature myself. Which goes to show that drag and drop would probably be worth adding simply because it is more intuitive to discover, although there would have to be a reckoning about how to reconcile it with the default sort order, etc. A "priority" tab in the connection list could be the right place to expose that feature.

I carry around a mobile Wifi device (4G) and also use the mobile hotspot from my mobile (4G but different provider). When I'm at home or work I usually use the Wifi available there. But when things are slow I sometimes need to switch wifi to the mobile devices. Here's what I did to make it faster.

This is a combination of two commands - first part turns off the wifi and the second part turns it back on. When it does this it connects you to the Wifi access point with the highest priority available. 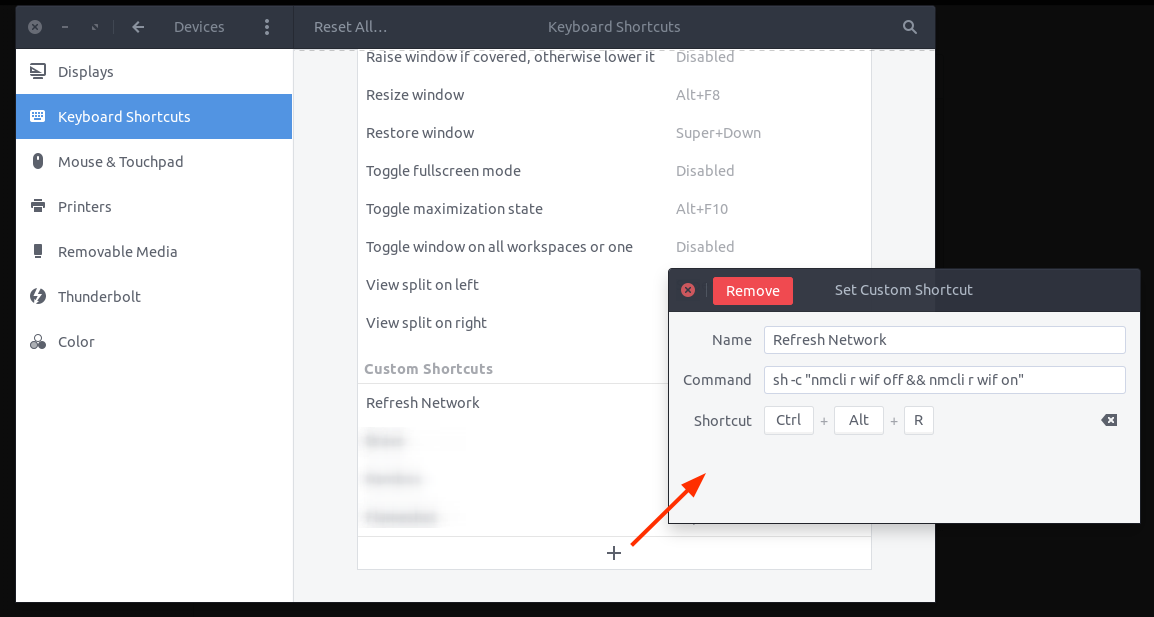 Now whenever you want to connect to a Wifi access point with a higher priority simply use the keyboard shortcut. Saves 5-6 clicks every time!

25
How can I adjust the preferred WiFi order?
5
Setting priority of wireless networks in KDE Network Manager
4
Prioritize one Wi-Fi network over another
3
Prefer home WiFi over tethering WiFi
3
WiFi how to automatically connect back to a preferred SSID when available
2
Automatically connect Ubuntu to a specific WiFi at startup
0
Time controlled WLAN switching?
0
How to blacklist a WiFi network by its SSID in Linux
1
Can I instruct gnome network manager NOT to connect to a specific network
0
Change default wifi sort order
See more linked questions