How do I get an XBOX 360 controller working?

I have a Microsoft XBOX 360 gamepad with the wireless adapter and I was wondering what I would have to install to use them with Ubuntu I do know that when using this on Windows I have to manually install the drivers for the wireless receiver (if that is relevant.)

If you find difficulties running your XBOX 360 controller, then this will help you install it on a computer running Ubuntu, and also show you how to configure it. These instructions are workable for both wired or wireless X-Box 360 controllers.

To be able to use your Xbox 360 wired/wireless controller under Ubuntu 12.04 (Precise Pangolin), you need first to install some required packages.

Open the terminal and run this command:

You also need to ensure that xpad is not getting loaded:

Connect now your game controller to your PC via USB (wired) or connect your XBOX 360 PC wireless gaming receiver for your wireless controller, then run this command to start the configuration:

In the window that shows up, select your controller (Microsoft X-Box 360 pad, Generic X-Box pad, etc.) and click Properties: 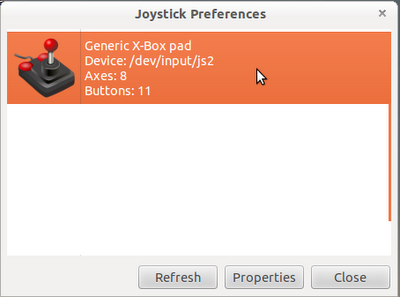 Note If your controller is not listed, try to click the "Refresh" button.

A new window will pop-up which will help you calibrate your gaming controller, remap the buttons of your game controller (changing the order of axis and buttons), etc. 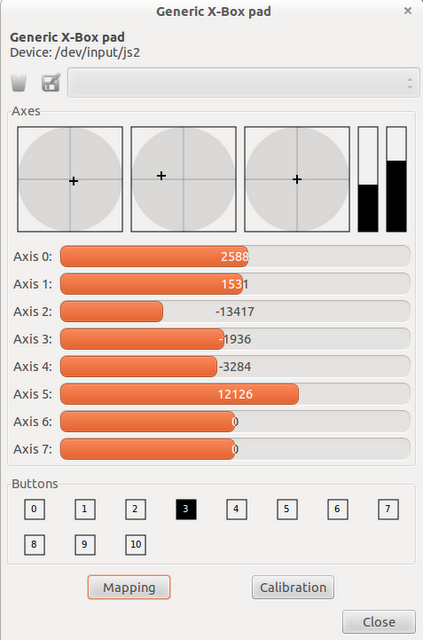 After you finish your configuration, save your new settings and close the window. You will be able now to use your Xbox 360 controller to play games under Ubuntu.

Configure xboxdrv to start at boot

If you're making a dedicated machine or want to ensure that xboxdrv is loaded on startup you can do this:

and in there add the following contents:

This will ensure xboxdrv is started on boot.

I created an PPA to install and create a proper daemon for xboxdrv in 14.04 and above.

Additionally this PPA will cleanup broken config, mark xpad as conflict (stop it if necessary), start the xboxdrv daemon and create a "Joysticks" entry into System Settings.

To install it, run in a terminal:

PS: I cloned the package to other releases and even changed it to work with systemd.

Finally solved it. Just type in this in the Terminal

and then press ctrl+c

and done you just installed Xbox driver and you're all ready to use your Xbox 360 controller :D. I guess when everyone says the controller is a Plug&Play and it does not then you have to install the necessary drivers to use it.

If you have problems with blinking LEDs just add this ppa and install the fixed xpad kernel module from SteamOS. Thanks Valve!

This updates the xpad module in Ubuntu, so you do not need xboxdrv.

This is an update to existing answers for a way to get an XBox360 controller working in Wine >= 1.7, including Steam games in Wine on Ubuntu >= 13.10. No root permissions needed for installation and operation.

The below method makes use of x360ce.exe, which basically provides Dinput codes for Wine to communicate with a game (Note that your XBox controller still sends Xinput controls).

I am not sure what you have tried, so let's try official instructions first. Please open a terminal(search for it in the dash) and type the following commands, one by one(no need to copy the output):

Reboot, and your wireless receiver should be recognized.

Note that unfortunately, there isn't a 12.04 package for xboxdrv-stable. You may consider contacting contacting the package maintainer, assuming you have a Launchpad.net account. Still, try using the software that needs the driver.

Just as an unrelated side note, the error you were seeing with your makefile was due to the fact that makefiles use tabs for indentation and likely when the file was copied those tabs were changed to spaces.

You don't need to install anything, the kernel has a build in driver. Just plug the wireless adapter into USB and sync the controller. xboxdrv is only needed if you want additional configuration options, button remapping, mouse emulation, etc.

That's old stuff. It should work as soon as you plug it in, if the game is compatible. I think if the game expects an xbox controller (i.e not a generic one) in Wine then it's not likely to work. Native games should work. It's listed as a project for Google Summer of Code so it's on the agenda.

I'm running Linux kernel version 4.0.0 and needed to install nothing and configure absolutely nothing to play games with my XBOX 360 controllers. Even linux-native couch co-op games that require more than one controller like "lovers in a dangerous spacetime" or "trine" worked out of the box. Just plugging in the two controllers and done.

The yank-decoupler part of my controller wasn't plugged all the way in. That was all my problem was.