Possible Duplicate:
How do I install Java?

But the gedit is empty, what i can do?

And what is the meaning of :

This command is wrong. The file path should begin with "/":

If you need java (jre or jdk), you can install it using user827992's answer or using Ubuntu software center, typing "java" in the search box, select the package and click "Install": 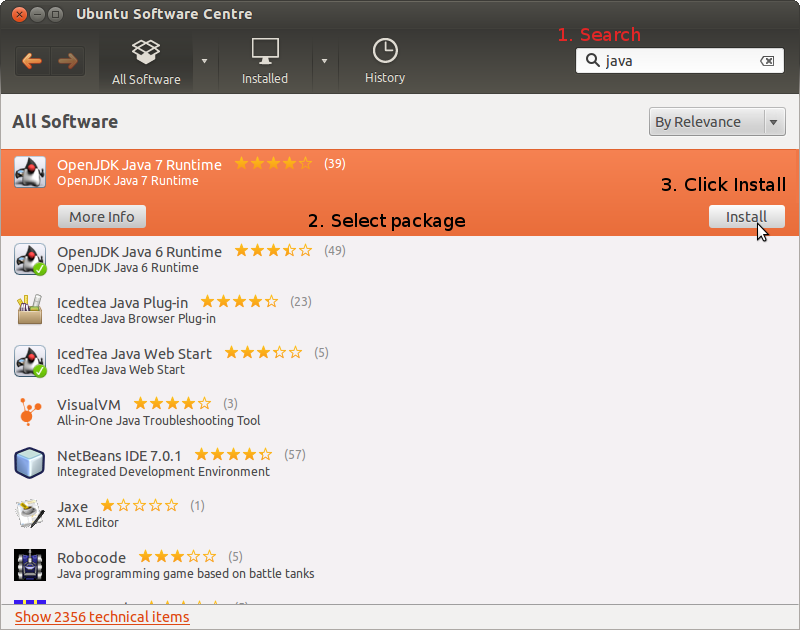 Most things will work fine with OpenJDK7 but if you are running into one of the exceptions the easiest way to install JRE7 is:

The page that gives detailed instructions is Here.

If you really need to use Oracle (ex Sun) Java instead of OpenJDK in Ubuntu, here's an easy way to do it: a PPA repository to install and keep your computer up to date with the latest Oracle Java 7 (Java JDK which includes JRE).

The PPA installed with the above command does not actually contain Oracle Java. ** Oracle licenses no longer allow Java to be redistributed.** This PPA works by connecting to Oracles official download server and downloads the file, it is then installed by apt-get or can be installed by the Ubuntu Software Center. It works the same way that the Flash Pluging installer works. Here is what the PPA manager(which is also the soure of these directions, see this link(same link as above)) here is some more of the page pasted here.

Oracle JDK7 itself is not hosted in the PPA because that's not allowed by the new Java license (which is also the reason why it has been removed from the official Ubuntu repositories); the package in the PPA automatically downloads (and installs) Oracle Java JDK 7 from its official website and installs it on your computer, just like the flashplugin-installer package does.

To install java in your machine follow these steps. This documentation cover installation and enabling java for browser. Download jre-7u5-linux-x64. Put it in Downloads folder.

If you want to search a package with a particular word in it like jre, just run

in a terminal to get the list of all the available packages in the repository.

You can install the package that you want with

Not the answer you're looking for? Browse other questions tagged installation or ask your own question.

10
ca-certificates-java fails when trying to install openjdk-6-jre
2
How do I install ckan?
0
Unmet Dependencies when I try to install wine or skype
4
Skype installation problem 12.04
0
What packages do I install to get WINE in 12.04?
3
missing libjpeg.so.62 from ia32 shared library
6
Creating a file system
1
Can not install MySQL on my Ubuntu 12.04
3
How to install 32-bit Brother drivers on 64-bit Ubuntu 13.10 or later?