How do I combine all lines in a text file into a single line?

I want to get all lines in a text into one line. I'm a beginner at coding trying to learn by doing. I've spent four hours trying to solve this problem. I know there's a simple solution to this problem. Here's what I've been trying.

I can't figure out where I've gone wrong....

tr as you used it should work and is the simplest -- you just need to output to another file. If you use the input file as output, the result is an empty file as you observed;

You need to remember some editors terminate a line with \r\n. For that case, use

ORS='' -> ORS(Output Record Separator). (i.e) your field separator, you can have any characters in-between the single quotes as a field separator. Using this awk method we can include spaces and all characters.

Search and replace \n with a space ' '.
You can get the replace window by going to 'Search'->'Replace'
or via the keybpard shortcut Ctrl+H 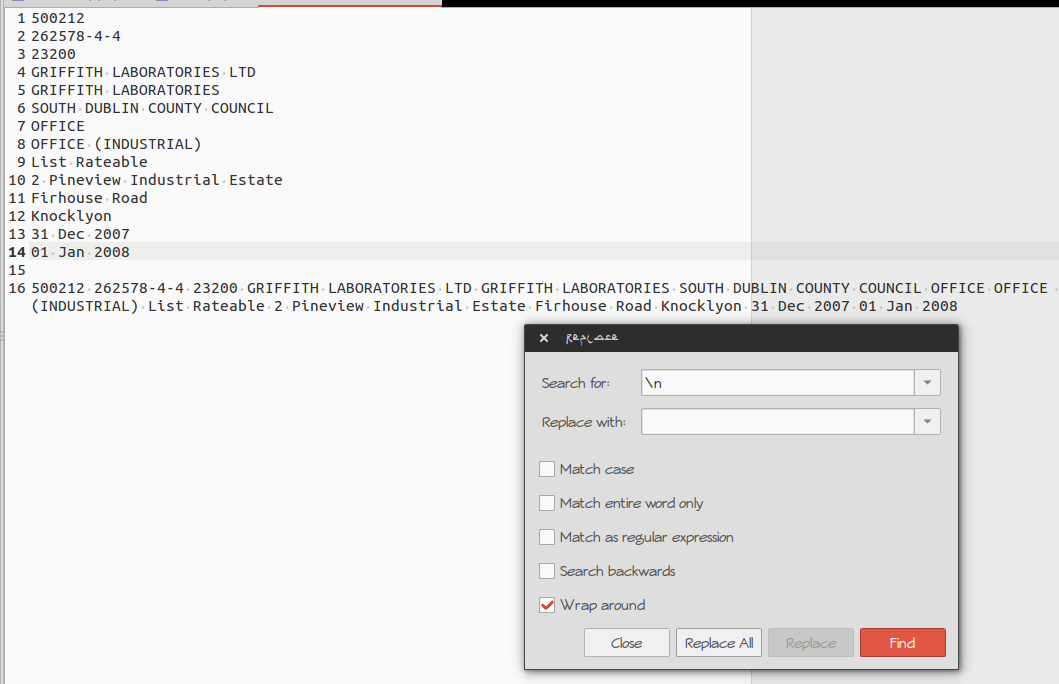 I think the easiest way to do this is:

There's no need to put the label :a outside of the main instruction, neither is the -e option necessary needed; finally, the /$/ is superfluous (every line has an EOL character).

Improving other answers, one gets

Which is clearer if written as follows,

The command works as follows:

So the script basically reads in the 1st line of input and keeps appending the following lines one by one, each time substituting the newline with a space; after the last line is appended (and \n changed in a space), N can't append any line, s fails, ta is skipped, the end of the script is reached, and the implied print statement is executed on the current looong 1-line pattern space.

The -i option substitutes the input file file with the whole 1-line pattern space.

I think you were simply forgetting that you needed to tell sed to redirect the output of yourfile.txt to the desired result, newfile.txt. This appears to be the command you need, but only if the files you are trying to merge are not too big for sed's buffers: sed -e :a -e N -e 's/\n/ /' -e ta yourfile.txt >newfile.txt. Credit to another forum here, where they discuss sed's capabilities. I have tested the command and it worked for me.

If it were me I'd just open it in vim and press Shift+J a few times.

Type within vim and press Enter:

With no subshell or external command calls makes it fairly fast, at least on smaller reads.

It is possible to achieve the same with read.