How to get Ubuntu membership?

"Contributions are valued and recognised whether you contribute to artwork, any of the LoCoTeams, documentation, the forums, the answers tracker, IRC support, bug triage, translation, development and packaging, marketing and advocacy or anything else."

Helping with documentation is one way. Another way is to do translation work. Your profile says you're in India, so if you're fluent in any Indian language (or any other language for that matter) then translation work would certainly be helpful.

As the wiki page on membership notes, "membership of the Ubuntu community means recognition of a significant and sustained contribution to Ubuntu and the Ubuntu community." These contributions can come in various forms. Some gain their membership through technical contributions (i.e. packaging programs or working on various quality assurance tasks). Yet many more become Ubuntu Members through other contributions. Some work on documentation or translations. Some contribute by providing community support on the Ubuntu Forums, in IRC channels, and even right here on Ask Ubuntu. Others contribute through marketing and advocacy, in their communities through LoCo Teams and on-line. Most have some combination of all of these.

Just as there are many ways to contribute, there are different ways to apply for membership as well. Most will apply for membership through the regional membership boards. Though if you contributions are more technical and you seek upload rights to the Ubuntu archive, you will likely want to go through the Developer Membership Board. Some communities within Ubuntu, like the Kubuntu Council and the Edubuntu Council, have been delegated the authority to confer membership to those whose contributions are mostly in their area. 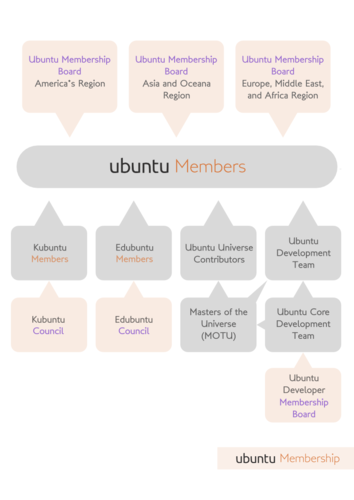 There is a wiki page telling you exactly what to do: See https://wiki.ubuntu.com/Membership and follo the instructions below "Procedure for Obtaining Membership".

There are various ways to contribute to Ubuntu.

If you're not good at programming, then you can always help to triage bugs by evaluating them as they're reported and processing them into the system so that programmers can spend more time fixing them and less time figuring out if they're actually valid bugs. A great place to do this is on the One Hundred Paper Cuts project since those bugs have a very strict definition and since their usability bugs, rather than technical bugs, you don't need to be familiar with the code base of the package in question.

The wiki page on Ubuntu Membership states that applicants must make a 'sizable and sustained contribution' to the Ubuntu project in order to be approved for membership. If you want some sort of benchmark for what is required, imagine doing 5 hours of work a week for around 6 months (that's the example I was given when I asked Jono Bacon about it at his weekly Q&A on Ustream).

The reason for this is that they don't want people coming along and burning themselves out after a couple of weeks of nonstop contribution and never being heard from again. If this happens, the effort the rest of the community had to put in to bring this person up to speed on what's going would be wasted, and whatever project they joined would have had to slow down a little bit while they settled in and learned the ropes, and that would have gone to waste also.

You can also obtain membership via forums participation

And I suggested a route via aksubuntu participation on meta, perhaps you could model an option similar to the forums ;)

Has there been any suggestion to encourage AU members to become Ubuntu Members?

Not the answer you're looking for? Browse other questions tagged community ubuntu-membership or ask your own question.

0
How do you obtain an @ubuntu.com email address?
13
Does contributing on Ask Ubuntu help me to become an Ubuntu Member?

10
Guidelines for documenting your contributions to the Ubuntu project
30
Who to follow on Twitter if you are interested in Ubuntu?
11
What happens after someone receives Ubuntu membership?
3
How can a web developer contribute to Ubuntu?
9
Can I become an Ubuntu Member by contributing on Ask Ubuntu?
8
Ways to get help in Ubuntu for beginners (Offline)
2
How to reapply for Ubuntu membership after it expired?