As a comparison/check, I downloaded and installed Linux Mint 13 Cinnamon to the same host on the exact same VM (I just changed the .iso image). It worked fine. Its iso is: linuxmint-13-cinnamon-dvd-32bit.iso

It seems (to me) that I have pae.. what is going on here?

Update: I had assumed that Linux Mint also required pae (being Ubuntu based), but I've just run;   grep --color=always -i PAE /proc/cpuinfo   in the Mint VM.   It showed no output.   So it seems the issue may lie with VirtualBox.   If that is the case, how can I get Virtualbox into pae mode?

software-installation virtualbox pae
Share
Improve this question
edited May 28 '15 at 12:30

On VirtualBox Manager, open your virtual machine configuration then select System on the left side and open the Processor tab. Be sure that Enable PAE/NX is checked. 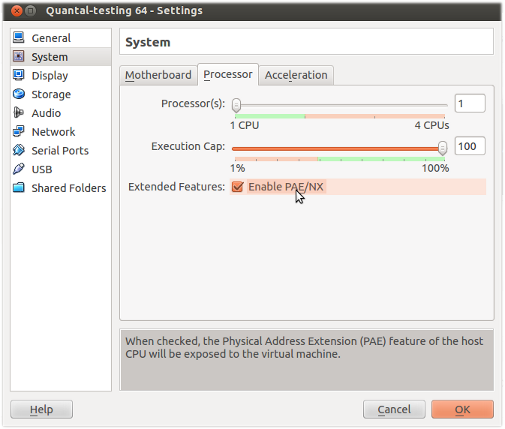 Not the answer you're looking for? Browse other questions tagged software-installation virtualbox pae or ask your own question.

0
Edubuntu inappropriate Kernel for installation
1
pae kernel required for my cpu
29
What's the meaning of “-pae” at the end of kernel version?

45
How do I run a 64-bit guest in VirtualBox?
2
Problem with VirtualBox after enabling 'pae' in 10.04 kernel
107
How can I install on a non-PAE CPU? (error “Kernel requires features not present on the CPU: PAE”)
4
How do I install a non-PAE kernel on PAE-enabled hardware for Ubuntu 12.04?
20
VirtualBox Guest Additions won't install on Ubuntu Server 12.04
2
Running IE with virtualbox
0
VirtualBox not detecting processor PAE
1
virtualbox guest not recognising usb