No internet access even though the wireless indicator shows 100%

The problem is, my Wireless network connection cannot connect. It's only worked if I plugged in the cable and then used the Internet for a while,

after being assured that I am connected, I will remove the cable and start using Wifi. This works just for a while, but when I restart I will have to do the same thing again.

After connected to the wired network, I try to bring my netbook away from the modem, I am still connected if I am nearby to my modem that located upstairs of my house. Then if I go downstairs, the connections is fading away but the wireless indicator still indicate 100% active.

Downstairs, I can't access the internet at all even though the indicator shows 100%. If I want to connect to the internet again, I have to go upstairs, put in the cable in again and again. This trouble's really exhausting me.

What is the problem?

You haven't indicated which brand your wifi adapter is. Have you check if there's a more uptodate driver for your wifi adapter? Does this also happen if you try it on another platform like windows?

I suppose your computer doesn't receive LAN paramenters (IP, DNS) via wifi. Try to Ping some IP outside you home network, for example Google public DNS 8.8.8.8. If it works with wifi after disconnecting from your ethernet cable, you probably need to configure your wifi connection settings manually ! Most likely you will need to provide DNS server information. 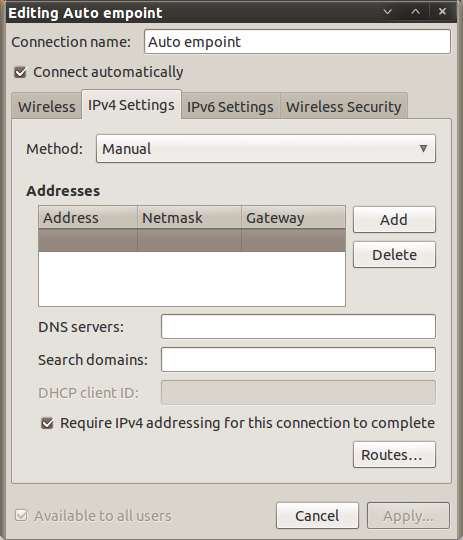 I had a very similar problem today using Ubuntu Maverick. I reinstalled my wi-fi driver (bcmwl-modaliases) and now the issue is apparently fixed. Identify your wi-fi driver and try to reinstall it on the cable. Then reboot and try to use your wi-fi connection.

If I were experiencing this type of problem with my own computer, I would start by trying to figure out whether the problem was with the DSL modem/router, or the computer. So the first thing I would do is reboot the modem/router to see if it is just a simple problem with that equipment.

Next, I would start to suspect that maybe it is a problem with the computer. Is there another wireless access point that you can try connecting too? Maybe at a library or coffee shop? If I could not connect successfully to another wireless access point, then I would really start to suspect that the wireless on the computer had some kind of problem. Maybe a driver that doesn't work properly? Maybe the wireless card is defective?

Read through the community documentation here it should give you all the information needed to find the root cause of the problem.

If your still having problems you will need to provide some more diagnostic information to enable us to help you further - stating that it works fine on Win7 gives us very little information to go on.

Not the answer you're looking for? Browse other questions tagged 10.10 wireless ubuntu-netbook network-manager indicator or ask your own question.