Which of these are Ubuntu partitions I can safely delete from Windows?

I am trying to uninstall Ubuntu by following these directions, but I have a question. Which partitions do I delete? I am assuming it is the three blank ones, but why would Ubuntu have three partitions? So I just wanted to make sure. 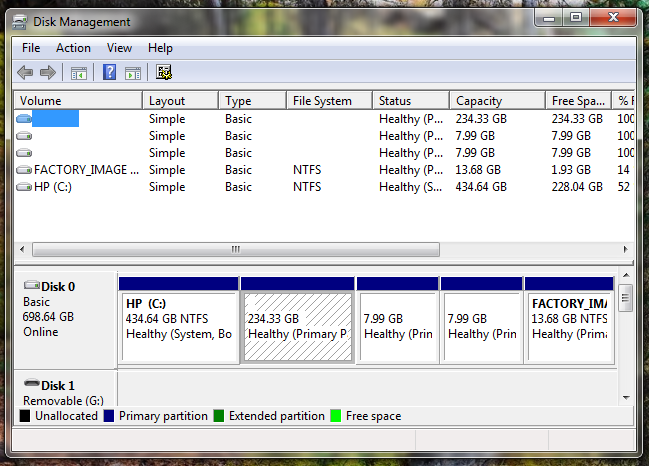 Unless you have installed a third operating system, these are your Ubuntu partitions:

Right-click to remove these partitions one-by-one, and then right-click the first (C:) to extend it across the unallocated space OR create a new partition in there.

You can get some more information on the two 8 GB partitions from within Windows by using the diskpart command:

Type 82 is swap, while type 83 is regular Linux (ext4, etc.). Do the same for the fourth partition, with select part 4. If either of those are NOT type 82/83, you should boot a LiveCD and investigate further with gParted as Eliah Kagan's answer recommends.

The 234.33 GB partition is likely your Ubuntu system's / partition that stores all the files therein.

One of the 7.99 GB partitions is likely your Ubuntu system's swap partition, used to swap pages of memory from RAM to disk to improve performance (and also used to facilitate hibernation).

What's unclear is what the other 7.99 GB partition is for. Unless a second swap partition was created (to increase the amount of available swap), there's no particular reason to have two partitions of this exact size.

So while you're probably safe deleting these partitions, it would be better for you to check just to be sure.

Whether you boot into the installed Ubuntu system or from an Ubuntu live CD/DVD or live USB flash drive, open a Terminal window (Ctrl+Alt+T) and run this command:

That will usually reveal enough information to know what your partitions are being used for. If you edit your question to include the text from the Terminal (paste it in, select it, and use the <$> tool in the Ask Ubuntu editing toolbar to format it properly), then it should be possible to give a more definitive answer.

Depending on what kinds of partitions these are, you may also be able to examine them yourself in Nautilus (Ubuntu's file manager). They may be visible under Devices, and you can mount them and look at what's in them. (You won't be able to do this with a swap partition, though, so you should not expect to see both of them under Devices.)

Since this is a Windows partitioning tool, it doesn't really show enough information to be sure. (Linux partition editors know about many more types of partitions.) But I'd guess that the ones with a blank file system type are unknown to Windows and thus Linux partitions. So you could delete them. But I'd boot from the install CD and run GParted first, just to be sure.

Ubuntu only uses one extended partition - do you know how much space you allocated to your Ubuntu partiton when you first dual-booted?

Not the answer you're looking for? Browse other questions tagged windows partitioning uninstall or ask your own question.

198
How to remove Ubuntu and put Windows back on?