How can I load the `vsftpd` daemon at system-boot, but have it “start” in a “stopped” state?

Because I only occasionally need to run an ftp server (vsftpd, in my case), I would prefer to just have it fully active only when the need arises.

This suggests two possibilities to me, but I don't know if both (or either) are possible..

Option 1: Do not start the daemon as the system boots up,
but instead, start it manually as the need arises... but I don't know the command(s) for this... Maybe it is just "vsftpd" and it will find its own config file(s)... but would this clash with disabling load-on-boot?

Option 2:. Start the daemon as the system boots up,
but start it in a stop/waiting mode... ie. equivalent to sudo stop vsftpd, or sudo initctl stop vsftpd.

I would prefer Option 1, because I rarely need an ftp server.

The answer to this may depend on which version of Ubuntu you are running. On version 10.10 (and maybe version 10.04) which uses upstart you can edit the /etc/init/vsftpd.conf file and comment out the two lines involved with starting vsftpd as so:

The # at the beginning of the lines indicates a comment and will deactivate starting vsftpd on startup.

When you are ready to start vsftpd, you can simply type:

at a command prompt to start vsftpd. To stop you would use:

I hope this is helpful!

You can stop the daemon using the following command,

Add the above command to startup list so that the daemon will be stopped during time.If you want to start the daemon after bootup.Issue the following command in terminal.

Adding the command to Startup list.Goto System>>Preferences>>Startup Applications.Click Add and give your command there. 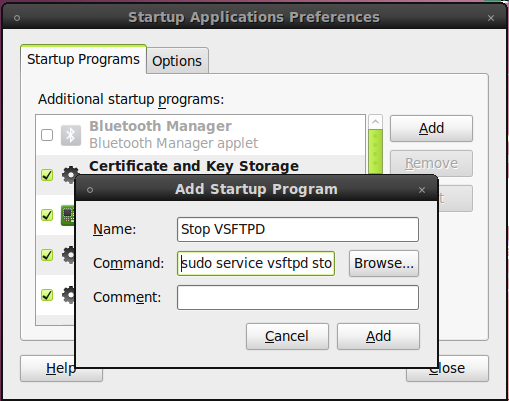 Not the answer you're looking for? Browse other questions tagged boot ftp services vsftpd or ask your own question.

0
How to make the vsftpd not to start automatically?

2
Custom daemon script: works, but does not run at boot / startup
5
Configure vsftpd to chown uploaded files
1
Setup FTP (vsftpd is not running)
3
Is FTP accesible outside SSH while using FTP-SSH
0
Configuring VSFTPD for a webserver
0
FTP: Connect as local user with different password
3
FTP account for just one directory
0
Log in as unix user using password stored in htpasswd
0
vsftpd not respecting passive settings in config
0
vsftpd error with self-signed certificates in Ubuntu 20.04