Not packages and not all applications. Just the applications user installed by himself from whatever source (Software Center, manually added PPA, etc.).

If the above is not possible - a list of all installed applications or at least a GUI which lists the applications so I can take screenshots of it.

Answer: It is not currently possible in Ubuntu Linux. (choosing tijybba's answer as the closest one though)

You can actually use the Ubuntu Software Centre, as shown in the screenshot here: 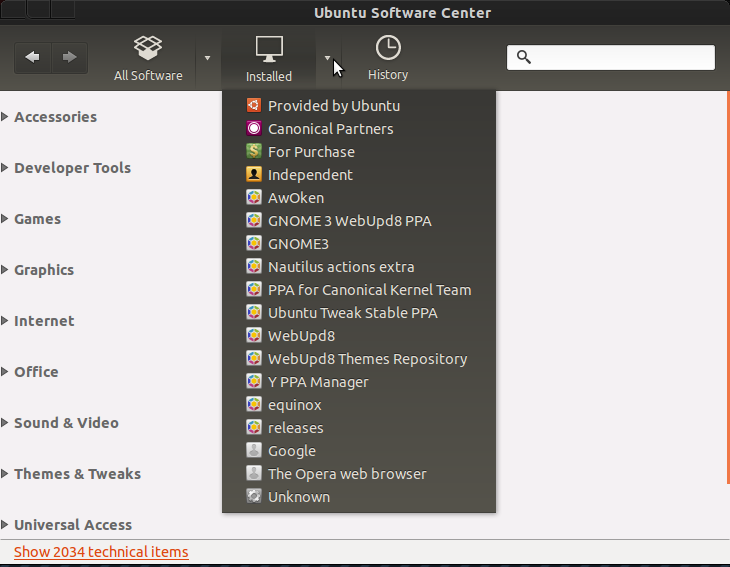 Also you can see it in Synaptic Bottom left list selections.

You can also you Y PPA manager to backup and update your repositories.

[Since this method involves installing all the packages , but if we think that newly Installed OS will already have those 90 % packages , so it will ignore the present ones and install the new manually added ones , which will be only your manually installed applications]

This method from here.

it will generate a list of installed applications in txt file in home folder.

This is also possible through Gui way 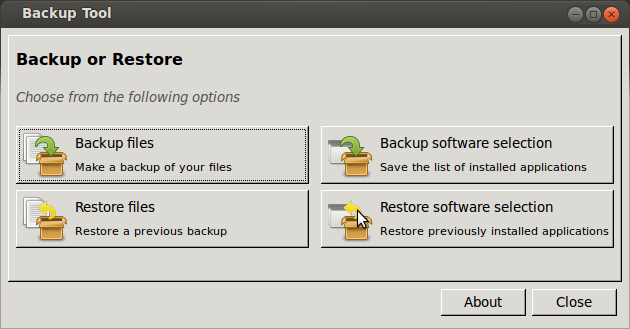 I guess image almost speaks itself, backup your selection, then in New installation restore it.

apt-mark showmanual will give you a list of "manually installed" packages. This includes packages installed by the installer, which is most of them. But if you run this after installation and compare the output again later, you'll get a list of packages which the user has specifically requested, excluding automatically installed dependencies.

Note that applications are packages as far as Software Center and manually added PPAs are concerned. Differentiating between packages specifically requested and packages brought in to satisfy dependencies is I think the best you can do.

Or to just see a list of all packages installed, run dpkg-query -W -f'${PackageSpec}\n'.

only root can install packages under Ubuntu, the user that can do that is just only 1, the sudoers are just user with equivalent rights.

However you can get a lot of information looking at the logs, you can look at

and you can get the list of the installed packages with just a command:

Actually, per your question I see that this following command does what you need dpkg -l | grep ii. This listed every installed package as it should for me. Now it does not say user A or user B but again this is a limitation not of sudo but of software center logs. EVEN using sudo the user who called sudo is passed so you could still have any app log who called sudo to run a command. Now of course you can get around this rather easily because part of sudo is the ability to login as any user [who has access to sudo] if you know their password, hack it, or change it if you have those rights on the system.

If you are concerned about what a user has installed in that it may put you or your system at risk you may want to review why you gave them sudo access and along with that the ability to install packages, but that's just a side note.

I have a feeling you are asking for yourself which packages you have installed since system install so you can either clean up or mirror the setup to a new machine. Answers here already cover the backup/restore so we'll skip that.

Since there is no easy straight forward way to find which user called the install of a package a better approach may be to use the command as listed both above and by another user to list all installed packages and have a browser window open to Google and run Google searched to figure out which packages are required to keep your system operational and which ones are not.

Skip to here to skip most of the fluff and get to the answer more directly...

So this tells me at this time and date this user called for a sudo [actually in this case gksu was used btw], what user sudo let them have permissions as and the big one the command they ran!

Now if you were to grep for apt-get or similar within the sudo log [/var/log/auth.log] and older ones will have .0 .1 etc appended to the end.

You could piece together which installs the user called for on the command line itself. If they used software-center I am not sure if the relevant terminal command would get an auth line here, but you get to use the software center logs found at:

/var/log/apt/history.log and older logs are in .gz compressed archives

Now the software center log does not provide the user who authed the installs as far as I have ever seen within that log, but it lists EVERY add, modify, or remove software center performs. Again this log also has time and date stamps as well so easy enough to find ackages after base system install go to oldest log go to top or if you remember the time and date of when the base install completed and you are good to go.

Both of those log files mentioned are in plaintext and you can use any gedit, mousepad, leafpad whatever text editor your Ubuntu flavor uses for it's default to view and or print them.

Not the answer you're looking for? Browse other questions tagged software-center backup installed-programs or ask your own question.

2
Install many applications using one command
0
Installed programs list software?
0
Is it possible to make a partition devoted to the softwares installed?
2
How do I view packages that I have installed
1
How to find and start Thunderbird or any application in Ubuntu?
0
How to Uninstall / Remove Ubuntu 12.04 from Live Media
2
How do i find everything that i have installed myself?
0
Ubuntu 20.04 adding to applications list from source - how to install clipgrab
1
want to get the all softwares and its details to make my system inventory
0
Copy ubuntu and all files from usb drive
See more linked questions

1
Which database to use for quickly and pygtk
0
My software center does not respond
3
Determining non-base install applications?
0
Packages and permissions
1
How do I manage installed software on Ubuntu 16.04?
3
Some packages listed as updates by Ubuntu Software centre, but not by `sudo apt update`. Why?