I had an Ubuntu 9/Windows 7 dual boot. (I almost never use the Windows side, actually.)

Ubuntu was bugging me to update, so I tried it (backing up everything first). Somehow, the update failed (I think because someone turned the computer off at the socket half way through). The computer now refuses to boot into Ubuntu.

Now I have an Ubuntu 10.10 install disk. I want to use it to overwrite the existing Ubuntu installation, while leaving the Windows installation alone. I got as far as the advanced "select a partition" section, but I had no way of knowing which partition was which.

What I have is

So, I want to leave the NFTS partitions alone (why do I have two of them?) and install Ubuntu 10.10 on /dev/sda5. Is that right? I'm not sure what /dev/sda6 is used for. What is a "swap area" anyway? I think I'll leave it alone.

So I selected /dev/sda5 and told the installer to use it as the "Ext4 journaling file system". The Install button lights up, but when I click it I'm told that no root file system is defined. How do I go about defining a root file system? 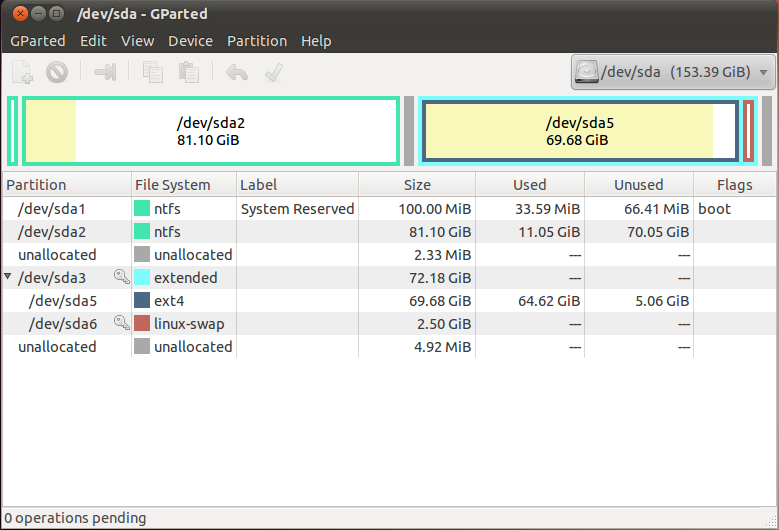 Select it and set the filesystem to ext4. Set the mount point to / (this is what you missed and why the installer was complaining). If you check the box next to format you will get a clean install, if you don't check it ubuntu will not overwrite your /home folder, so all your files and settings should be there after installation

Set its filesystem to SWAP (it will be formated, but this is OK)

What is a "swap area" anyway ?

Swap is used to store data if your RAM is full. It is also used to copy your RAM to if you hibernate your PC.

If you had multiple linux partitions and you don't remember the content per device names you will need to manually mount them and verify the contents. Boot from the live cd with the "try it without installiing" option, then launch a terminal and check the list of partitions:

Checking the contents of /dev/sda5 :

If you boot into the Live CD you can access System > Administration > Gparted. You can look at the filesystem type and your windows is NTFS while the Ubuntu partitions are likely ext3 or 4.

I just had to do this earlier today. What I did was I found out which partition was formatted as FAT and which was formatted as ext4. It was fairly obvious in the "Select partition" screen. I selected the ext4 partition for the installation partition.

How do I go about defining a root file system?

If you select manual partitioning, you can delete the sda5 (ext4) and sda6 (swap) partitions. This will give you a bunch of free space. Click on the free space and Add a partition. Size it to be about 2 GB less than the available free space. Select ext4 and in the Mount Point box select / which gives you root. Now the system tells you that you have a new ext4 partition and 2 GB of free space. Click on the free space, add a partition and, instead of the default ext4, select swap. Now, you have an ext4 partition where Ubuntu 10.01 will be installed and a swap area which Linux uses as temporary storage space when the operating system is running.

[I'm not sure if you need to delete and recreate the swap partition, but this process keeps things relatively tidy - Ubuntu will be (perhaps) sda7 and the swap partition will be the next available number (sda8).]

Just keep in mind that Linux does not use NTFS partitions, so if you don't want to screw up your Windows just don't touch them in Ubuntu installation.

Not the answer you're looking for? Browse other questions tagged partitioning dual-boot ubiquity or ask your own question.

3
How to make Grub display after installing Ubuntu on a laptop with Windows OS?
0
Dual boot Win 7 Ubuntu - home and boot partitions have no mount point
2
Uninstall Kubuntu from a dual-boot with Ubuntu?
1
GParted allocation trouble on Win8.1/Ubuntu dual boot
1
How do i Remove Windows and expand my root partition?
1
16.04 Reallocate Partitions on Dual boot system
1
Boot problem Ubuntu 1604 on machine with Windows10 and UEFI
2
How to install Ubuntu 18.04.* in a single partition on a dual boot with Windows 10?