I am trying to install VitrualBox's Guest Additions on Ubuntu Server 12.04, but keep getting an error. I am using the following command sudo ./VBoxLinuxAdditions.run --nox11 and get the following error: 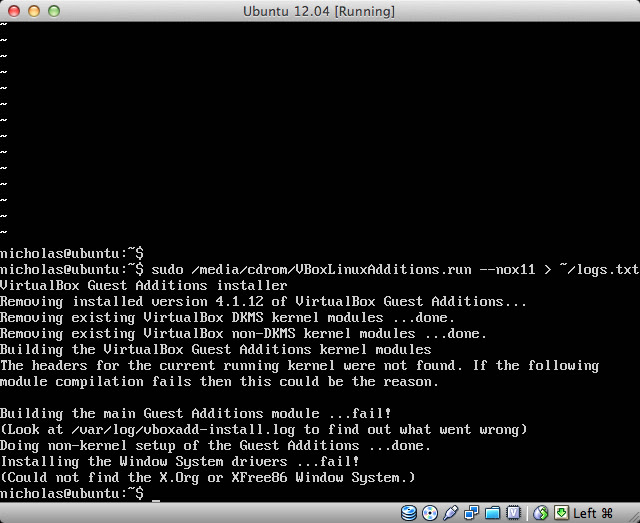 I had the same problem when running the installer from the vbox additions iso, but running sudo apt-get install virtualbox-guest-utils worked fine. I did an apt-cache search virtualbox to verify the name of the package before attempting the install.

I did however, run the command suggested by Gregory above (as I was trying to get the installer to work from the iso, which it never did), but that may or may not have had an impact.

If you want to avoid the installing X11 dependencies use:

I had the same issue. Install some additional packages and every thing will be fine:

I had a similar problem and unfortunately none of the previously suggested solutions helped. What I did in the end was uninstall VirtualBox & install the latest version. This also meant that my version of the Guest Additions went from v4.1.18 to v4.2.4. Once I restarted my Virtual Machine created with the previous VirtualBox version, I was able to mount the guest additions ISO & run the VBoxLinuxAdditions script. You still get the error with the Window System drivers but that's to be expected with Ubuntu Server.

So I suggest giving an update of VirtualBox (and therefore the Guest Additions ISO) a try as well.

I would add to @ignis' solution: sudo reboot

After the ubuntu server restarts the Guest Additions will be available to you.

Not the answer you're looking for? Browse other questions tagged 12.04 server virtualbox or ask your own question.