What does the "Basic Ubuntu Server" package contain in software selection during installation?

I'm installing Ubuntu from an Ubuntu Minimal image, and I've gotten to the software selection part. What I'm wondering is, which packages are included in the "Basic Ubuntu Server" option? 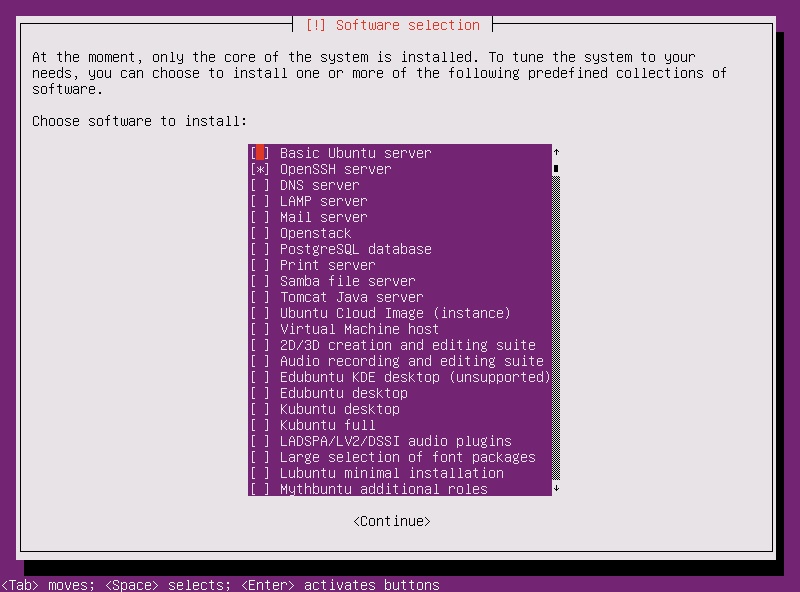 I'm assuming it's a bundle of packages, but which exactly are included in it?

In the spirit of teaching a man to fish...

You can find a list of tasks and their proper names with the command:

This will tell you that the "Basic Ubuntu Server" task is named "server". With this name, you can generate a list of the related packages:

If you are looking this up, you probably want a minimal install. To achieve this on Ubuntu 18.04 and beyond, you should select only OpenSSH Server, which contains 12 packages, as opposed to 151 packages in Basic Ubuntu Server.

And to add further clarity, the netinstall, mini.iso, Ubuntu Server ISO will all achieve exactly the same result.

Finally, with regard to kernels, 18.04 originally came out with kernel 4.15.0.1, now up to 4.15.0.62, signed as of September 2019. They also have a low latency version. Kernel 4.19 is a perfect kernel if you are on an Intel system with an NVIDIA GPU. It provides faster random disk access, but slower Intel CPU. This leaves kernel 5.2 out, since it is only good for Virtualization and AMD hardware.

outputs the packages, sorted alphabetically and without any duplicates:

Not the answer you're looking for? Browse other questions tagged package-management system-installation ubuntu-minimal or ask your own question.

30
What's in "standard system utilities" in the server install?
23
Are there cases where vi is the only option?
7
How to setup Ubuntu Server on top of ubuntu 16.04 desktop?
3
Ubuntu Server minimal package

12
How do I do a minimal install without an internet connection?
2
Software selection screen in Ubuntu installer
2
Basic Ubuntu installation with non-Unity desktop?
5
What is the difference between a package and a software in ubuntu?
2
trying to install Ubuntu 16.04 server - unresponsive keyboard during language selection
0
What package adds user "ubuntu"
4
What is the software that is pre-installed in Ubuntu?
0
What is package selection states of debian packages?