What does the term “Extended Partition” mean? Is it safe to use this type of partition?

In the image below, what does Extended 103 GB mean? 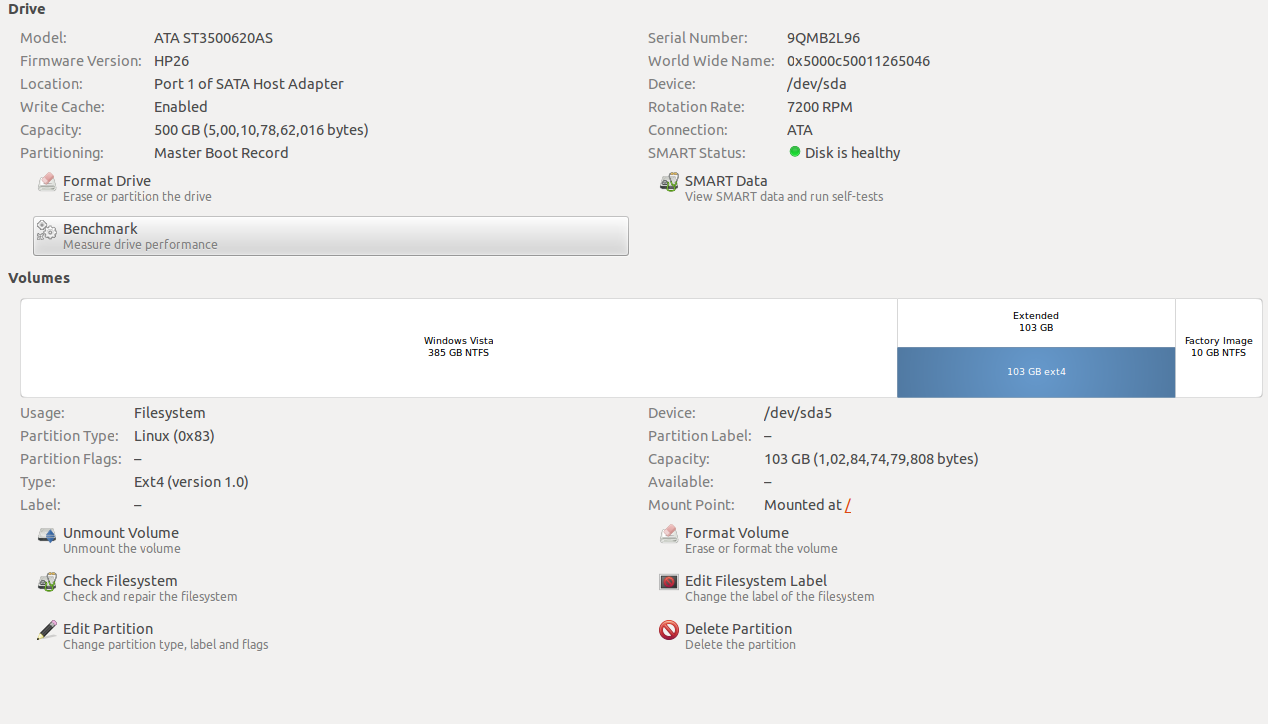 A traditional partition table like yours can have maximum of four primary partition. That means you can't have more than four drive. Concept of extended partition solves this problem.

Primary partitions are generally used for installation of operating systems. However, logical partitions can also be used (for eg. your Ubuntu is installed on an extended partition)

In your hard disk you have three primary partitions :

Yes, using an Extended Partition is safe. It is a work-around used to extend the original method of partitioning a disk which only allowed dividing a disk into a maximum of four partitions. This description in Wikipedia provides a (very) brief overview of the terms and their meanings.

The original method was developed in the early 1980's when 10-20 MiB was considered a "very large" disk. To put it another way, the original Master Boot Record (MBR) partitioning scheme was created at a time when 0.002% of your 500 GB drive was considered a HUGE! amount of storage.

By the time they realized how foolish the original scheme was, they were locked into into it. So using an Extended Patition containing logical partitions was developed as a work-around.

At some point in the future, disks will no longer use MBR partitioning. Instead they will use a GUID Partition Table (GPT). Using GPT partitioning there can be (at least) 128 primary partitions. So GPT partitioning does not use an Extended Partition. (As a side note, a minimum of 16 MiB ... or over 1 1/2 times the size of one of those early 10 MiB hard drives used with a 1980's PC ... is reserved just for a GUID Patition Table.)

However, all the major computer manufacturers appear to be working together to make the transition from MBR to GPT partitioning as difficult as possible. So it is not clear at what point MBR partitioning will be replaced by GPT partitioning. The use of an Extended Partition may be with us for quite some time yet.

Not the answer you're looking for? Browse other questions tagged 12.04 partitioning or ask your own question.

0
How to edit a mounted HDD
1
What is an extended partition for? Is it comes by default when Ubuntu installed via a CD?
6
How to mount partition from disk
2
What are my partitions?
1
Cannot create a new partition for my unallocated space
2
Trying to Install Ubuntu 12.04 need help
2
Windows7 Gone after Ubuntu dual boot install
2
Is there a “Edit mount options” (cog icon) in palimpsest in 12.04?
0
Extended Partition: Trying to understand what to do when my other partition is full
0
How can I reposition a partition?
See more linked questions