Yesterday I installed Ubuntu 12.04 for the first time (I've always been a Windows user) as I was at the office and I had the Ethernet connected.

At home I only use WI-FI. When I started Ubuntu it didn't connect or try to connect with any network.

By google, I found the command rfkill and these are the results:

Well, the WI-FI is blocked by hardware, so I tried the command rfkill unblock 2 and it didn't work. As I didn't know even my Broadcom model, I found lspci and the result for the WI-FI is:

My laptop is a Dell Vostro 1520 with WinXP also installed. Thanks for the help!

PS: It also may help that when I enter System Settings > Network (it may be different, my Ubuntu is in Spanish) "Airplane Mode" is connected. When I try to unlock it, it goes to its original place after I close that window and open it again and when I reboot.

The Broadcom "Additional Drivers" are turned on and enabled.

Broadcom and ubuntu do not play nicely together

After trying several things, I solved it by reseting the BIOS (Lenovo B570).

When you turn on the computer, press F2 to enter the BIOS, then reset it F9 .

I found this and it worked for me.

This is how to get the wireless hardswitch to turn on using the terminal:

Then enter this command to turn it on:

Reboot and see if it stays on.

Well, I must say within last 4 hours I've been trying every possible solution I found in any ubuntu forum. And I finally made it, found the solution shared in a spanish forum. I hope is not too late to help someone to find its way.

So, after trying any possible combination with rfkill in terminal, with and w/o sudo, trying to delete some config files I've found in other "possible answers", and searching into BIOS setup the option I didn't find about turning on Wireless always on startup, I kept digging and the answer I found was this:

Due to an error in linux kernel, rfkill sometimes doesn't act as expected, and there is some incompatibility within linux hardware controller and some hardware devices. Solution recommended by this guy is to start laptop with a bootable pendrive and start wireless from there.

So that's what I did, fortunately I had the pendrive wich I used to install current Ubuntu 12.04 LTS OS I'm in now, and after booting with it, I was able to start wireless directly from the menu bar icon. Then it's just a matter of turning off, remove pendrive, and turn on again from HDD. And it's working again, no hard-block anymore. 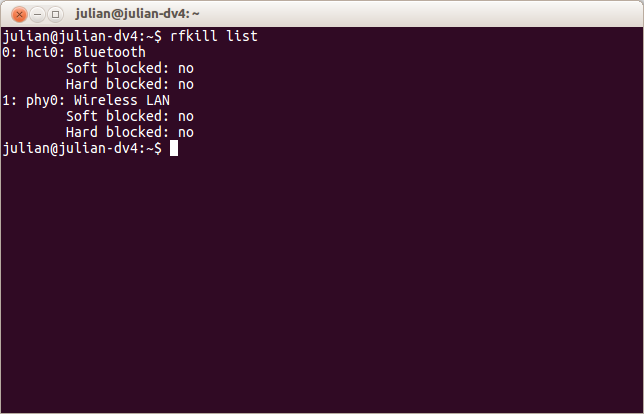 Pd: I'm just guessing, but I think what triggered the issue in first place is that I turned off the laptop with Wireless deactivated, and then after turning it on again, there was no way to unblock wifi hardware from being off, or not at least with my touch hardware switch.

I just had to push the wireless switch on the side of my laptop some how I accidentally had turned it off. But now its working, gotta watch out for that small mistake. Costs me 2 hours of searching.

Broadcom hardware often requires closed-source drivers. Have you enabled Proprietary Drivers? To do this go to System Settings -> Additional Drivers

Are you sure the hardware switch for Wi-Fi on your PC is turned on?

Not the answer you're looking for? Browse other questions tagged wireless networking drivers dell or ask your own question.