I bought a new Sony Vaio S series laptop. It uses Insyde H2O BIOS EFI, and trying to install Linux on it is driving me crazy.

What is surprising is that there are 2 EFI system partitions on the disk. The sda2 partition is a 20gb recovery partition which loads windows with a basic recovery interface. This is accessible by pressing the "ASSIST" button as opposed to the normal power button. I presume that the sda1 EFI System Partition (ESP) loads into this recovery.

The sda3 ESP has more fleshed out entries for Microsoft Windows, which actually goes into Windows 7 (as confirmed by bcdedit.exe on Windows). Ubuntu is installed on sda6, and while installation I chose sda3 as my boot partition. The installer correctly created a sda3/EFI/ubuntu/grubx64.efi application.

The real problem: for the life of me, I can't set it to be the default! I tried creating a sda3/startup.nsh which called grubx64.efi, but it didn't help -- on rebooting, the system still boots into windows. I tried using efibootmgr, and that shows as it it worked:

However, on rebooting, as you guessed, the machine rebooted directly back into Windows.

The only things I can think of are:

Can anyone please help me out? Thanks -- any help is greatly appreciated, as this issue is driving me crazy!

I was eventually able to solve this. I replaced the EFI/Microsoft/boot/bootmgfw.efi with the grub64.efi. I renamed the former to bootmgfw.efi.old and used grub to add a menu option to chainload into it.

This implies that the firmware is hardcoded to look for the microsoft windows bootloader, and does not respect efibootmgr settings, or startup.nsh. That's really terrible.

I found out how the Sony EFI boot process works:

Under Linux, the efibootmgr tool does work, but it displays a lot of auto-generated nonsense, including the last USB drive you've used.

Here's how I learned all this:

(Perhaps it is possible to use the Windows Boot Manager to do all this, but EeasyBCD's EFI support is still a mess in my experience. I refuse to touch it again for a while.)

First, you don't have two ESPs. An ESP is a partition with a partition type code of C12A7328-F81F-11D2-BA4B-00A0C93EC93B, which parted identifies as a partition with its "boot flag" set. Your output indicates that only /dev/sda3 has its "boot flag" set, so you've got only one ESP -- /dev/sda3. Under GPT, partitions can have names, and you've got two partitions with the name "EFI system partition," but these names are used for human identification purposes only. Thus, my guess is that you (or some automatic utility) created a /dev/sda1 with the intent of making it an ESP, but either there was an error in setting its partition type code or some other utility improperly changed its type code from C12A7328-F81F-11D2-BA4B-00A0C93EC93B to something else.

There are a number of ways you can correct this. The simplest is to just change the name of /dev/sda1 to avoid confusion. If you think that /dev/sda1 serves no purpose, you could back it up and delete it. This will get it out of the way and avoid confusion, but of course you'll then have 273 MB of unused disk space. Alternatively, you could devote the space to some other purpose, if necessary changing the name and type code to avoid confusion. EFI explicitly allows multiple ESPs, so you could change the type code (by setting the "boot flag" using parted, for instance) and use both ESPs; but this could be confusing.

Chances are that this issue is unrelated to your inability to boot Linux, since it sounds like all the relevant files are on /dev/sda3. Several possible reasons for this problem occur to me:

You can try adjusting your efibootmgr command, locate a new binary, or whatnot to test these possibilities. If all else fails, I recommend you do the following:

This should get GRUB booting using the default name for the boot loader (EFI/Boot/bootx64.efi). One problem with this is that GRUB might not have a working entry for Windows. You can probably create one manually; an entry like this should work:

Alternatively, you could install rEFIt or rEFInd as EFI/Boot/bootx64.efi. Note that the rEFIt binaries available from its site won't work on UEFI-based PCs; you'll need to use the version in the Ubuntu repositories. rEFInd is a fork of rEFIt with numerous bug fixes and updates, including better UEFI support. (rEFIt seems to have been abandoned about two years ago.) Thus, I recommend using rEFInd rather than rEFIt -- but I'm rEFInd's maintainer, so I'm not an independent observer on this score. Unfortunately, AFAIK rEFInd isn't (yet) included in the Ubuntu repositories, so you'll have to download and install it manually.

Same starting position here on a new sony vaio e series. Thanks Rod for your answer.

Just in case someone needs a walkthrough, this is what worked for me:

Installed ubuntu 12.04 from USB alongside win7.

now it booted directly into grub2, but without win7 entry 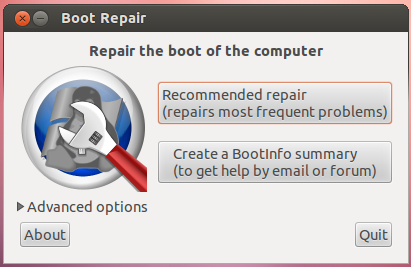