Due to a graphics card compatibility issue using CrunchBang, I was told that my best option would be to move to 12.04 LTS. I'm trying to get everything configured and personalized the way I'm used to things, but am having some issues with unbinding default Unity shortcuts.

I'm used to having all my shortcuts routed through the super key (T for Terminal, W for Web, Up for increased opacity, and so on). I've followed instructions to install compizconfig-settings-manager, and did an advanced search for all keyboard shortcuts binding to the super key, including the Unity shortcuts, but Unity still seems to listen for that keypress, and thus neither compiz nor the keybindings set up in system prefs -> keyboard receive the commands I give them. 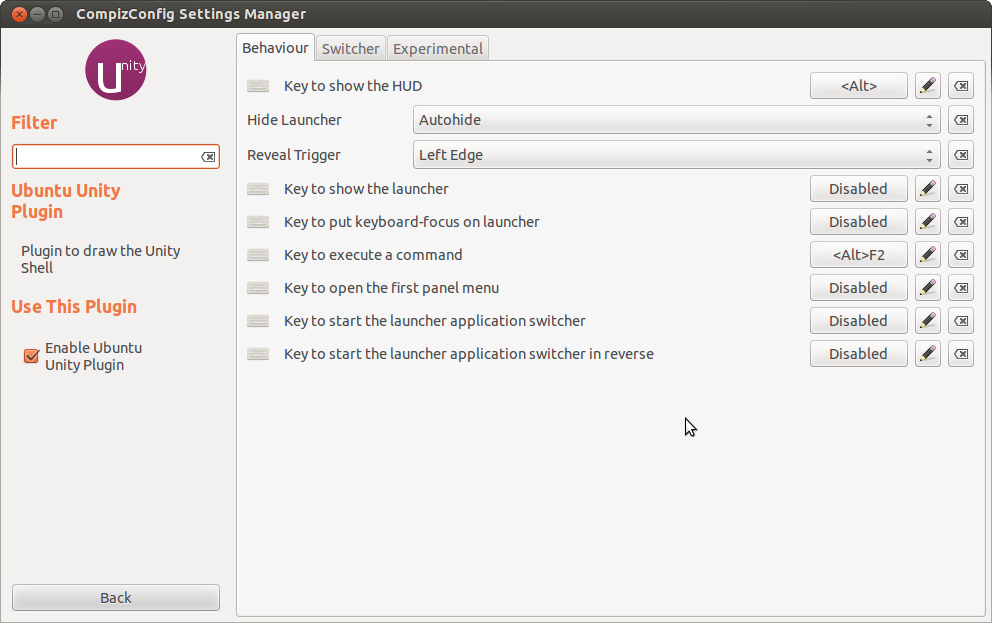 Believe Unsettings will let you do that.

It seems already known bug: https://bugs.launchpad.net/compiz/+bug/950160 To work with solution mentioned Can I define keyboard shortcuts using the Super key? , may be it need to disable Tap_Detection for Super key.

I have tried something and it worked. I did not change all the bindings but some and it did work.

You install the gconf-editor and from the menu you go to Edit → Find and you search for the string <Super> (With the <> symbols). You choose to search in all key names and key values. Then you browse to each finding and you change the value to something else or you disable it. I would suggest that you keep a log with the changes so that you can make the changes back in case something goes wrong.

I changed the <Super>w to <Super><Alt>p and it worked. You can also leave it blank or write Disabled to disable it.

If you want to reassign the functions to other combinations bear in mind that only the special keys have the <> symbols and you should put all letters in small case. Otherwise it gets complicated. You have to write each combination. It does not grab it automatically.

If you don't mind using the numbers, you can put your favorites at top, then hold Super(windows-key) and press the number 1/2/3... for 1st/second/third app.

This worked for me on Ubuntu 12.04 precise, without Compiz.

Not the answer you're looking for? Browse other questions tagged unity compiz or ask your own question.

3
Can I disable the F10 key for all apps without CCSM?
4
Edit shortcut list window displayed through super-key pressing
4
Using Super+key that are already setup by unity
1
Remove <Super>L lock screen shortcut
10
Unity hates my super key
3
Unity launcher not triggered with Super key
6
Super+Space not working on Unity 17.10