How can I use Netflix on Ubuntu?

Is there a way to stream Netflix content to my Ubuntu machine?

The solution in this answer should only be used in cases where native playback is not possible (e.g. unsupported Ubuntu releases, browsers other than Google Chrome).

Also note that as of Firefox 49, Netflix playback is natively supported.

Note: For new instructions --as of October 2013-- on how to install (Windows-)silverlight (ultimately useful to watch Netflix) in Firefox see at the end.

Open a terminal (Ctrl-Alt-T), an type:

This will install around 254MB of packages, mainly it will install wine-compholio (a custom version of wine that is able to run Silverlight) and dependencies. If wine is not installed already you may need to agree to use Microsoft fonts (in the text mode window use arrow keys or tab to reach the red "ok" button in text mode when it appears). The download/installation takes around 15 minutes.

Then run the newly installed "netflix-desktop" application from the menu (or from the command line). 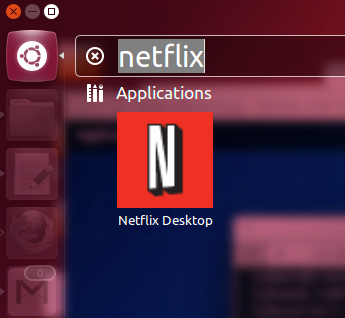 If something went wrong in the installation (third party links are involved), don't panic: netflix-desktop will detect that something is missing and try to reinstall it, if that also fails, start over.

When you run it for the first time it will initialize wine and probably ask about installing Mono and Gecko wine packages (I accepted and installed them just in case).

The netflix-desktop application opens up, login to your Netflix account.

The window will open in fullscreen, which is very elegant, but if you want to have control over the window press F11 right away to exit fullscreen mode. (It may also ask to install a Firefox extension --specially designed-- that makes fullscreen mode more friendly.)

Use Netflix as you would normally do. 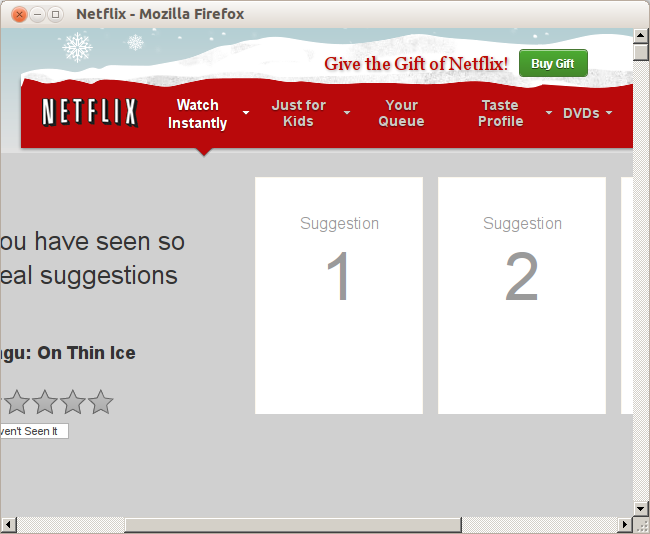 (As you may have realized at this poin, the netflix-desktop is really Firefox 17 running on wine without menubars. Press F10 to gain control over the Firefox menu and navigation.) 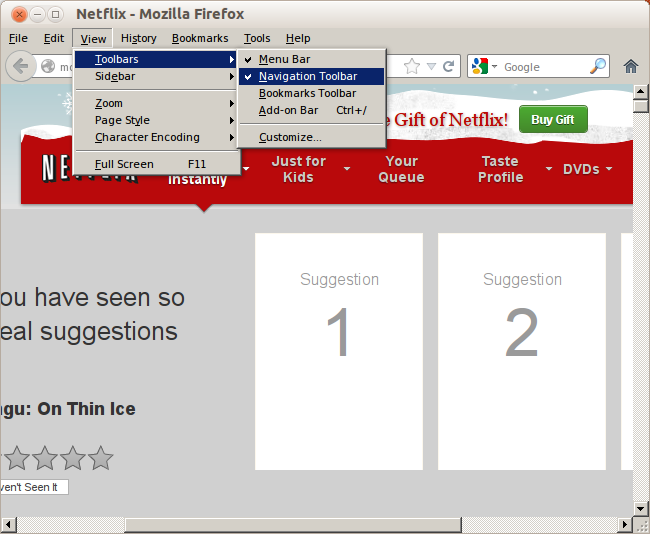 Bonus: By running this you have a fully functional Firefox 17 (Windows version) with working Silverlight that can be used to navigate other sites, by pressing F10 -> View -> Toolbars -> Navigation menu on the main window you can access any site and be able to use Silverlight.

Alternatively, it is now possible to install Silverlight inside (Linux) Firefox as if it were a native plugin. (you can see http://fds-team.de/cms/pipelight-installation.html for more info)

Then go to www.netflix.com.

Native HTML5 playback on Ubuntu 14.04 and up

You will need an updated installation of Google Chrome (not Chromium; and make sure to choose the right package for your machine): 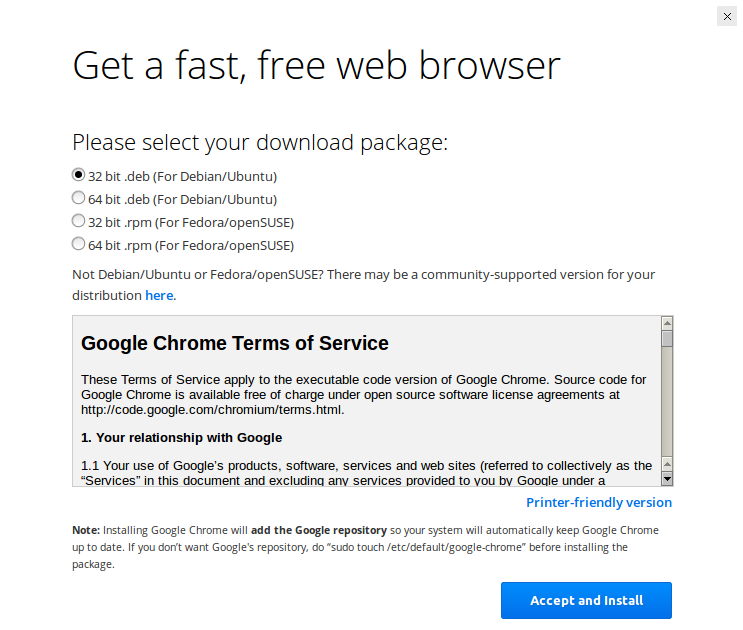 1: (as I experienced stuttering on that level of device; Nevermind, current update has relieved most all playback issues with my netbook.) 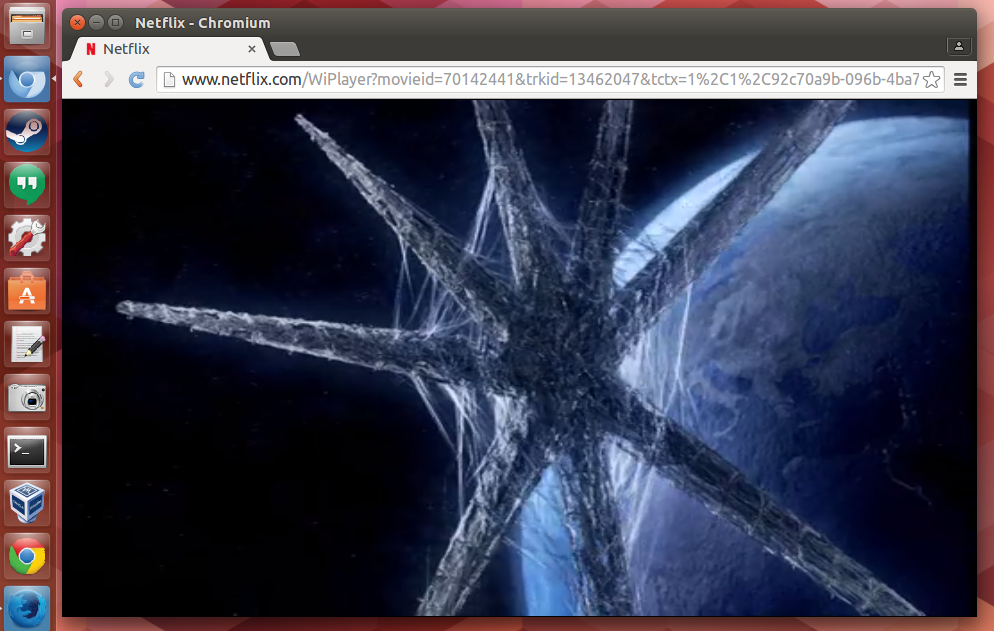 You can integrate Netflix with your Ubuntu desktop by creating a nice .desktop launcher:

Now you have a Netflix WebApp!: 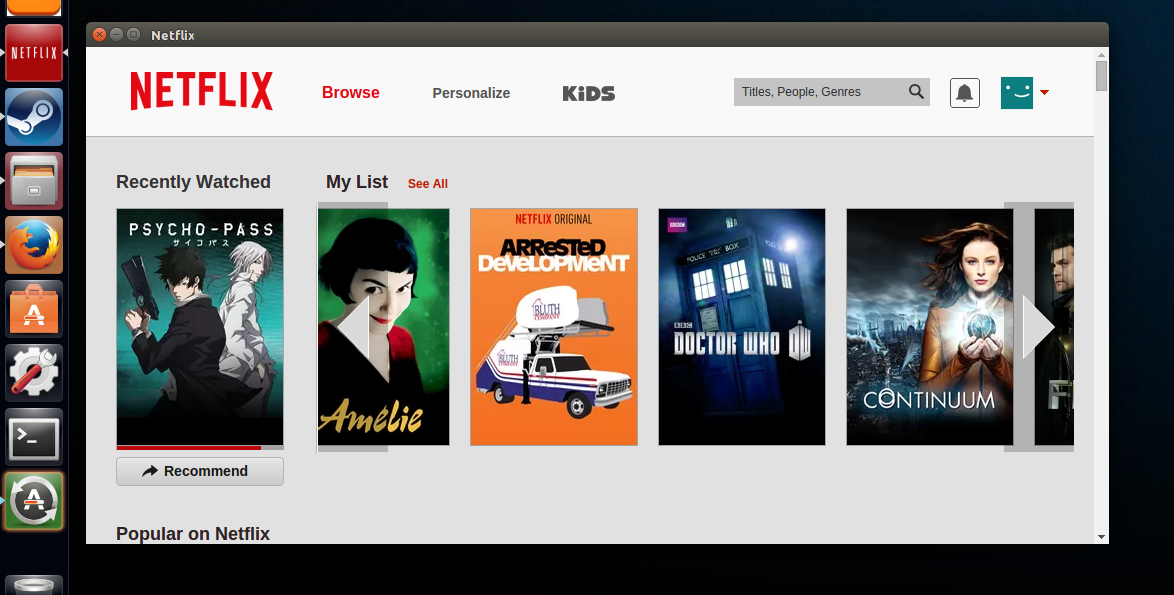 Alternatively you can also use the Chrome plug-in and launch it in "Windowed" mode by doing the following:

This will make Netlix available in the Dash:

If you don't like the appearance of the scroll bars, you can enable Chrome's overlay scrollbars. Go to chrome://flags/#overlay-scrollbars and Enable them. Now you have scrollbars that complete the experience: 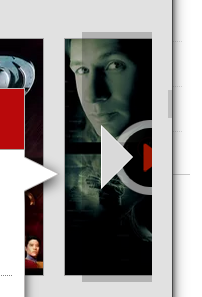 For firefox, after version 49 you can also watch netflix on linux without any extra steps, firefox will download the native google widevine CDM plugin and play protected content:

Now that I have Firefox 49 or higher, how do I watch Netflix?

So this are the needed steps:

Chromium does not support Netflix because of the lack of a needed component. You can manually install this component, but it's a hassle and not really worth it.

Firefox doesn't support Netflix either, at least as of 2014.

If you want Netflix on Ubuntu, you need to use Google Chrome. Download the DEB file from Google's website.

PlayOn — the service which drives Netflix (and Hulu) — will be rolling out an HTML5 client which should negate the need for Silverlight (and Moonlight). It’s out for the iPhone now, and I assume that it will shortly be used to stream PlayOn services to Linux Machines.

I read a while ago that it might be possible to run a Wii emulator instead of virtual box, but I don't think that would be an improvement for most people. I've been meaning to try Netflix in an android emulator since the app came out, however I still need to test if it will actually work. The problem is that the app is only "approved" for certain phones. There is a hack that is suppose to work for rooted phones, So I think there's a good chance this could be a better solution than virtual box, but it's hard to say for sure.

If someone else gets this working please let me know.

There IS a way to watch things on Netflix through Ubuntu though.

You will want to virtualize Windows XP/Vista/7 on Ubuntu. I would recommend Virtualbox, but you are free to use whatever you want. Under the virtual machine, you can use the real Silverlight and DRM-support and watch Netflix.

Pipelight is a plugin that builds upon Erich Hoover's Netflix-Desktop to allow Ubuntu users to watch Netflix from within a native Firefox browser.

Now Silverlight will work on some sites but Netflix and some others check the browser user agent and will not play on a Linux machine.

In Firefox got to Tools -> Add Ons and search for User Agent.

Head over to netflix.com and enjoy.

This is from an article on web upd8

Netflix desktop is too resource intensive and the overlay is VERY ANNOYING, I would HIGHLY recommend the following steps and use Firefox.

Now you won't have a dedicated application for Netflix and you can use your existing browser installation.

Another non related benefit of pipelight is that you can enable the latest Flash version with it. No need for pepper anymore! :)

(This information can also be found in the original article: https://que-cosas.blogspot.com/2020/04/ver-netflix-en-el-chromium-de-ubuntu.html)

We can do it by means of the following command, which will provide us with the .DEB file where we will find the desired Widevine folder.

Then we will decompress it in a folder that we will name tmp.

2º We changed the permissions of the Chromium snap pack. 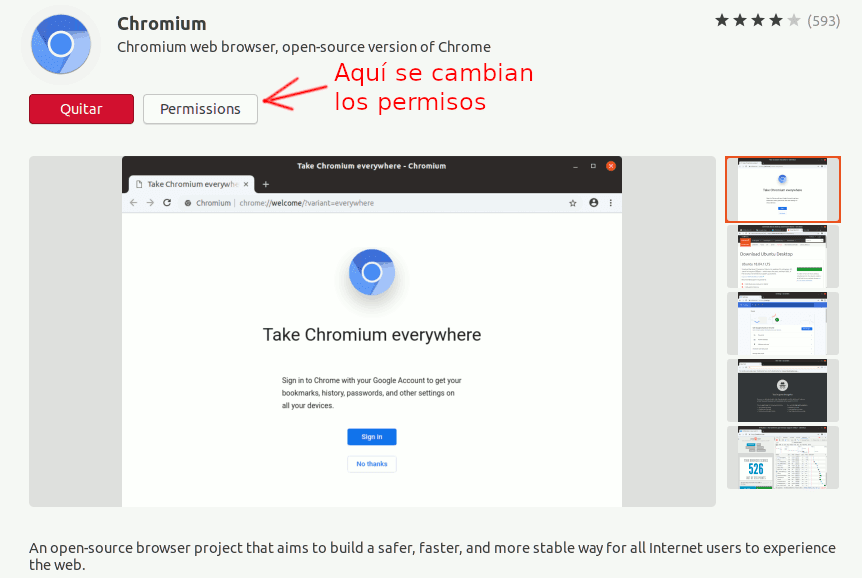 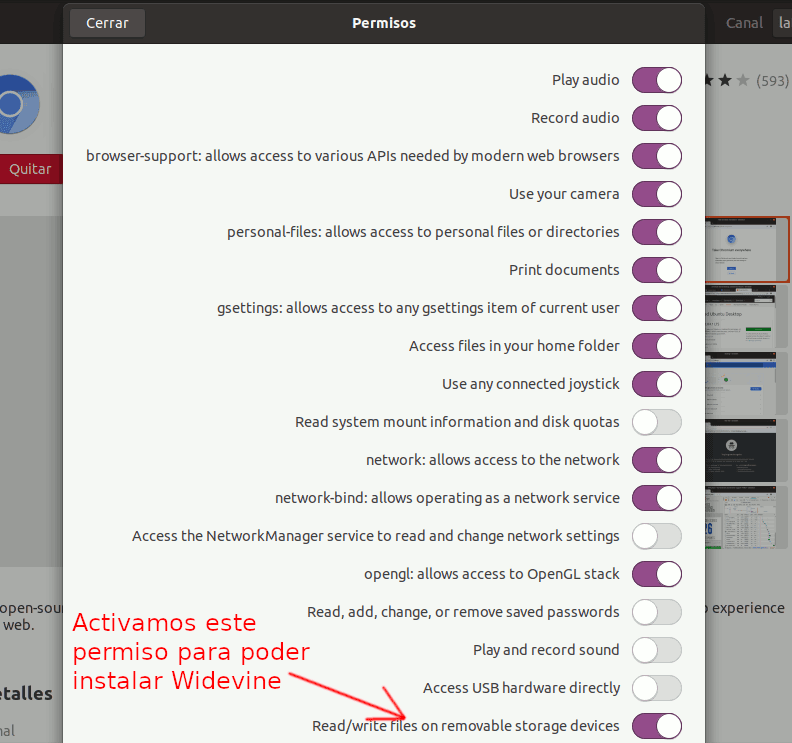 3º Copy or move the WidevineCdm folder inside Chromium.

The next step is to move the plugin to the place that Chromium needs to make it work. We can do it as follows:

Once this is done, we can delete the temporary file and the Chrome installation file.

4º We have to trick Netflix into believing that our Chromium is a Chrome.

This step is based on a browser property called User Agent. We are interested in knowing our User Agent, for this we can use the following link:

Right now I'm getting the one on my Chromium browser next:

And that's not going to help us watch Netflix, we have to modify the part where it says snap Chromium so that it only says Chrome. So that it looks like this:

We'll get that by putting an extension on Chromium that will allow us to make this change. For example with the User-Agent Switcher for Chrome extension from the Google Store:

And with all these steps, and once the extension is configured with the Chrome User Agent you will have no problem seeing Netflix in Chrome on Ubuntu 20.04 and without installing Chrome.

I had a similar problem, but I managed to solve it as follows;

P.S.: I was confused for a while with Chromium vs Chrome. They are different projects, and only Chrome works with Netflix, not Chromium.

Then find netflix in the launcher and it should work.

BUT if it doesn't work the first time, like it didn't for me, try this:

I got my answers from here: http://www.iheartubuntu.com/2012/11/ppa-for-netflix-desktop-app.html

It has some further troubleshooting notes that I didn't post here so check it out if this doesn't work for you.

Not the answer you're looking for? Browse other questions tagged netflix or ask your own question.

4
Can I stream Netflix to Ubuntu via a Mac?
5
Netflix on Ubuntu Touch