I want to display GPU speed, Memory, and Temperature on my conky configuration. On the conky site it says you can use ${nvidia temp}°C to show it. However, when this happens, it takes it as litteral text. I've read a bit, and it looks like I'm missing a plugin or something. Some sources say to install Nvidia-Settings which I've already had installed. (PS i have a gefore 360m)

I was able to get a temp reading as you can see in the top of this picture. I used a long line of code ${execi 60 nvidia-settings -query GPUCoreTemp | perl -ne 'print $1 if /GPUCoreTemp.*?: (\d+)./;'} °C But the conky objects are much cleaner, and I'd like to just be able to use them instead.

Does anyone know how I can get this working? (See VIDEO section)

Here's the code for the Video section... 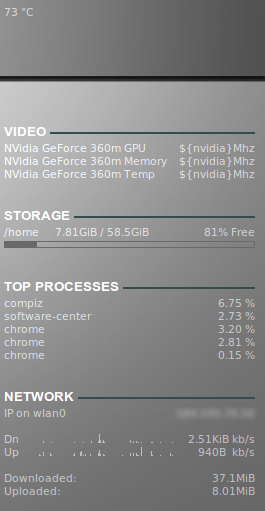 In the terminal run conky -v If you don't see nvidia in the compiled in features, install the conky-all package which is compiled with all options including nvidia.

if you don't want to use the nvidia-settings application, conky can read the values itself. You just have to recompile conky with the --enable-nvidia option. Then ${nvidia temp}°C will work. It's not compiled by default because of known reasons.

I just thought I would put this up in case anyone else came across this post.

Not the answer you're looking for? Browse other questions tagged nvidia conky or ask your own question.