I have a Korg Nanokey, and I'd like to make it produce sound in ubuntu. I've read that means I should be using Rosegarden, and that Rosegarden uses JACK, but does not install it. (Although checking out Ubuntu Software Center, apparently some components of JACK are installed by default?)

I understand there can be a lot of work setting up JACK without it fighting the default sound server. Can someone give me a step-by-step method for what I need to do to plug in my midi machine and hear music when I press keys as simply as possible (without messing up pulseaudio, ie, so I can still access Skype and ordinary desktop stuff)? I'm fine installing JACK, but I'd like to sandbox it a little if it has the chance of messing up regular desktop.

I've looked through a couple resources, but I'm not sure what's outdated, but the following looked helpful...

If you just want to get your keyboard to play sound, this is very simple, and you won't need JACK nor Rosegarden for that. These tools are great if you want to record MIDI signal, write notes, and route audio between separate applications, but you don't need that to play sound with your keyborard.

My step-by-step would be to:

I have also once written an article on general workflow for music production with external keyboard on Ubuntu, it should be useful in your case. Here's the link.

MIDI on Linux is highly modular and, as a result, initially overwhelming. It's nice to have a low-complexity solution working before you bother with optimizations, but unfortunately Ubuntu doesn't come with a default working configuration. Here's the simplest way that I have found...

At this point, you should be able to play notes from either your external MIDI controller or from the virtual piano GUI (the GUI works even if you don't have an external controller).

From the Keyboard GUI you can select different instruments (see Program). From the Qsynth GUI you can manipulate the volume (see Gain) as well as Reverb/Chorus effects. There is also a Panic button in case the reverb goes off the rails.

This was specifically tested on clean install of Ubuntu Studio 18.04, but similar steps worked for Ubuntu MATE 16.04, with a notable automatic configuration difference being that Qsynth -> Setup -> Audio -> Audio Driver defaulted to jack in Ubuntu Studio but to alsa on Ubuntu MATE.

On both 16.04 and 18.04, I have experienced weird static when Qsynth initially starts working with alsa. This static seems to affect all audio sources, but it somehow works itself out in a minute or two (at least partially).

I later tried this setup on a less powerful CPU and noticed a similar static that did not seem to resolve over time. [As an aside, I noticed that this static correlated with the ALSA plug-in [qsynth] line glitching in and out in the Applications tab of Sound Preferences].

This led me to play around with some Qsynth Settings, and I found something that seems to solve both static/glitch problems (maybe with a trade-off of a minor latency increase):

Apparently, the CPU can't always keep up with the required burst rate, so a little extra buffering is needed to prevent underruns. Presumably the are other settings that could also affect this.

vmpk loses its connection to Qsynth when the settings are changed. The quickest way to experiment with changing settings is to close and restart vmpk to force a reconnect.

I've got my eye on Polyphone as a (nearly) all-in-one solution (essentially a superset of qsynth+vmpk). Although it isn't in the Ubuntu repositories so far (as of 19.04 Disco), it was easy to build from source on 18.04 (also, there is a pre-built Ubuntu .deb provided).

The package doesn't include a default soundfont (it is a soundfont creator/editor), but you can get one with sudo apt install fluid-soundfont-gm (at /usr/share/sounds/sf2/) -- or try downloading from the application's "Online repository" (but this may require an account).

Go to Settings->General->Input/Output and make sure the Audio/MIDI settings are sensible, then open a soundfont and select an instrument under Presets and it should be ready to play music from your MIDI controller, or from the built-in virtual keyboard.

I don't know about Rosegarden, but you can run qjackctl from the package manager. Amsynth is an easy little way to make sound midi->jack.

I don't know how to run jack and pulseaudio at the same time - ie running chrome through jack (looking into it right now, actually). My experience in 12.04 is easy so far to make sound.

Find out about your sound card:

My pipeline scenario that finally worked, using jack-control (qjackctl) and qsynth was:

4.1 Go to Connect -> ALSA. In the left column find out your keyboard and connect it to qsynth that lies in the right column. Also make sure that in the first column (AUDIO), qsynth is connected to your speakers (right column).

4.2 Back in the main qjackctl window Go to setup->settings->advanced and in the right column, choose Output Device (speakers) and Input Device (Midi keyboard)

By this step I was able to hear my keyboard. An overall screenshot of the setup follows 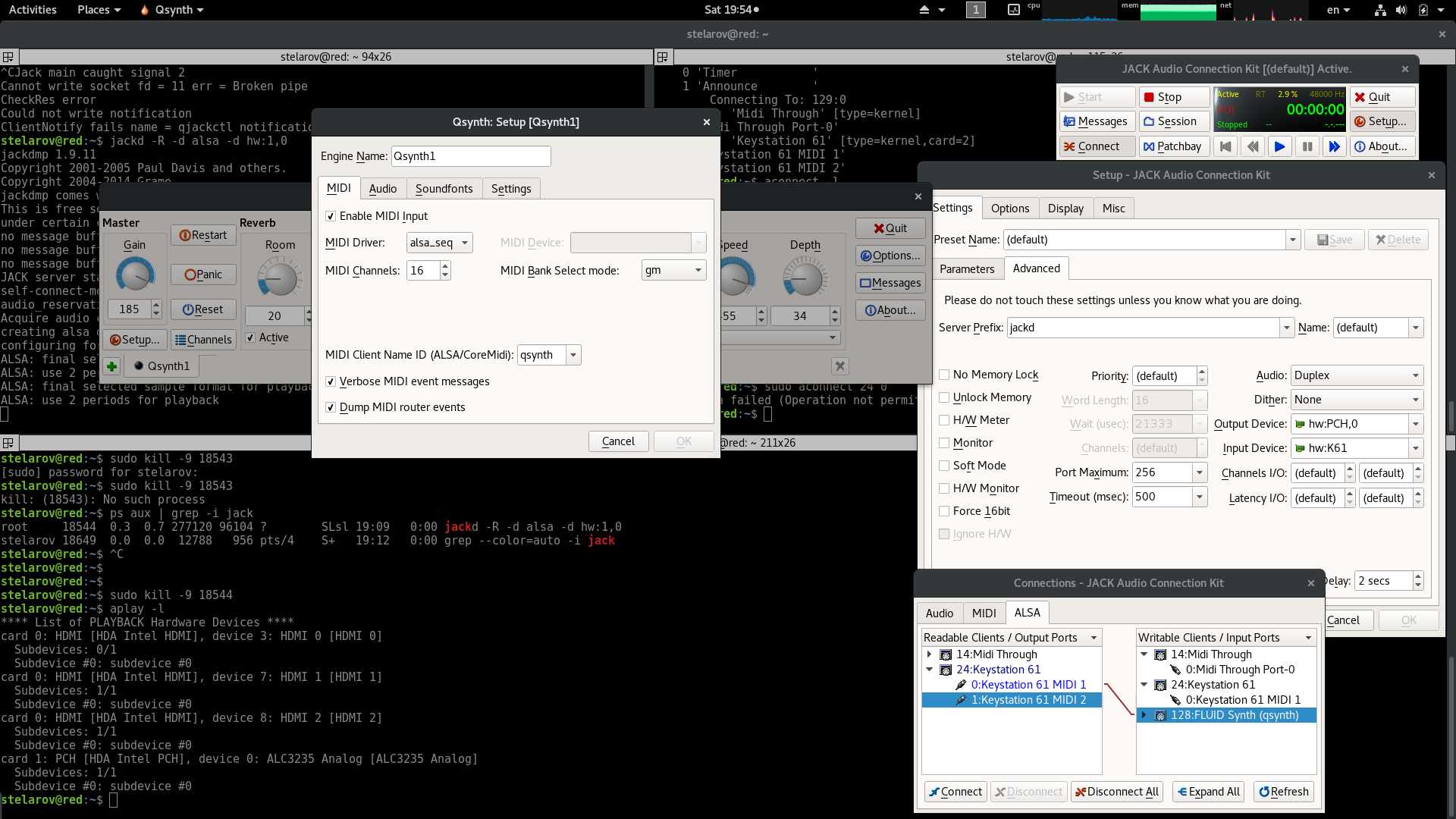 PS: In this scenario no other application can use the speakers at the same time.

To extend the accepted answers point 4 "Tell the system to pass data from your keyboard to the synthesizer" I'll just quote the Arch wiki which helped me immensely by giving simple to the point instruction:

Find the ID of your Synthesizer or whatever using aconnect --output, example:

Route your input to your output using aconnect 28 128

Not the answer you're looking for? Browse other questions tagged 12.04 sound pulseaudio jack midi or ask your own question.