How do I enable the Nvidia Geforce GTX 570?

I just installed 12.04, it was running smoothly and I downloaded and installed all the recommended updates.

After checking the details pane of the System Settings window I noticed that the GTX 570 didnt show up as graphics unit.

Because of this I figured I needed to download the drivers like I would have needed to in Windows. So I did this but being a complete newbie to linux I didn't succeed in installing them. (I think)

Anyway after several tries and errors i shut down the PC and restarted it. This resulted in no signal to my screen after trying to reboot--with all the monitor outs affected.

Here are my questions:

I'd be very grateful for any help. Thank you in advance!

Here are the specs of the system I have built.

In response to comments requesting additional information here are some more steps I took.

Should i physically reinstall the GPU and give the Additional Drivers route another try? Or is a manual installation of the required drivers a better Idea?

I tried the Jockey console first wehen i had the GPU installed but it did´nt shwo anything. After rebooting the PC Wouldn´t signal the Monitor so i took the card out again and wen´t through a couple of how-to´s downloading the synaptic Package amnager and adding the x-swat repository to my system and upgrading the current and settings via the Synaptics console.

After that i figured it should be fine. So i reinstalled the GTX 570 and now it says ubuntu is running in low graphics mode an sometimes wont even take any futher input from the Keyboard not even letting me into the console. So there is virtually no way of installing the drivers (again?) with the Card installed

What to do i´m beginning to lose hope since it seems to work so easily for others. Thx for the support.

The Nvidia driver included in the Ubuntu repositories (version 295.33) should support your graphics card according to Nvidia (see picture below). You may enable the card using "Additional Drivers", also known as jockey, by hitting Alt+ F2 typing gksudo jockey-gtk, entering your password when prompted and then enabling the Nvidia driver using the graphical interface (note that you will need to have your video card physically installed for jockey to detect it and offer the driver).

To learn more about how Ubuntu handles hardware drivers differently from Windows please see this Q&A. Also please be aware that there is a bug so that System Settings will show Unknown for your graphics card even when it is correctly installed and working--you may safely ignore this (or see this Q&A for the workaround). 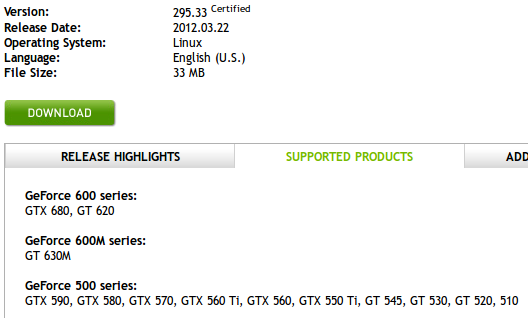 If for some reason you require the newest driver or "Additional Drivers"/jockey is not automatically detecting your card/installing your driver you can install it manually by:

Hope this helps and welcome to Ubuntu!

In the system settings there is an program called "additional drivers" which is very simple, and should give you the ability to install the driver. As for Nvidia, I never had problems, amd is a completele different story(but since you got nvidia, ur fine). Did you uninstall the drivers you installed manually?! Because a clean install would probably give a better outcome ;)

Not the answer you're looking for? Browse other questions tagged 12.04 drivers nvidia 64-bit gpu or ask your own question.

71
How can I get my graphics card to be recognized in System Info?
4
How do I install drivers for graphics and sound?
0
Newbie question…My Intel DZ77BH-55K came with a windows express installer disk