How to save brightness settings?

After I upgraded my notebook to ubuntu 12.04, I found that I can not save my power settings. Every time I set the screen brightness to 70%, it restored to 100% next time. I can't find a save button on the new power setting panel(I am sorry for I can not post a screenshot right now). Can anyone tell me how to save this setting? Thanks.

if you just wana change and save the screen brightness only, you can use xbacklight

after installing, type command to set the screen brightness easily

the num is percentage of your screen brightness.

An easier way to set brightness and contrast

use lspci command to find out your VGA device code.

From now on this brightness level will be set every time you start your computer.

Personally I prefer starting with the brightness I had the last time I used my computer. Here is how I got that functionality:

First create a file to store your screen brightness between sessions:

Then create a script that stores your current screen brightness when shutting down into the file you created in the previous step:

Put this into the file you just opened:

Now we need to make the script run every time we shut down or reboot the computer:

Finally we need to load the value we stored when starting the computer:

Put this, before exit 0, into the file you just opened:

Using Ubuntu 12.10 the solution Hevilath gave didn't work for me. No matter what I did with rc.local it wouldn't run.

I tried to add

before the exit 0 and it was not being called. I added some logging statements to /etc/rc.local and /etc/init.d/rc.local and nothing was being run at all.

This should be working because Upstart still runs the older System V scripts at the appropriate times for backwards compatibility.

So I read up on how to write an Upstart script from here.

I figured since System V is on its way out, I should learn about Upstart.

I wrote a simple script to set the brightness on my two monitors and it works without issue.

Check it out here.

All you have to do is copy the file into your /etc/init/ directory using sudo. It should just work unless the brightness value is being echo'ed to the wrong file in case it is a simple change.

Save it. Then issue command, 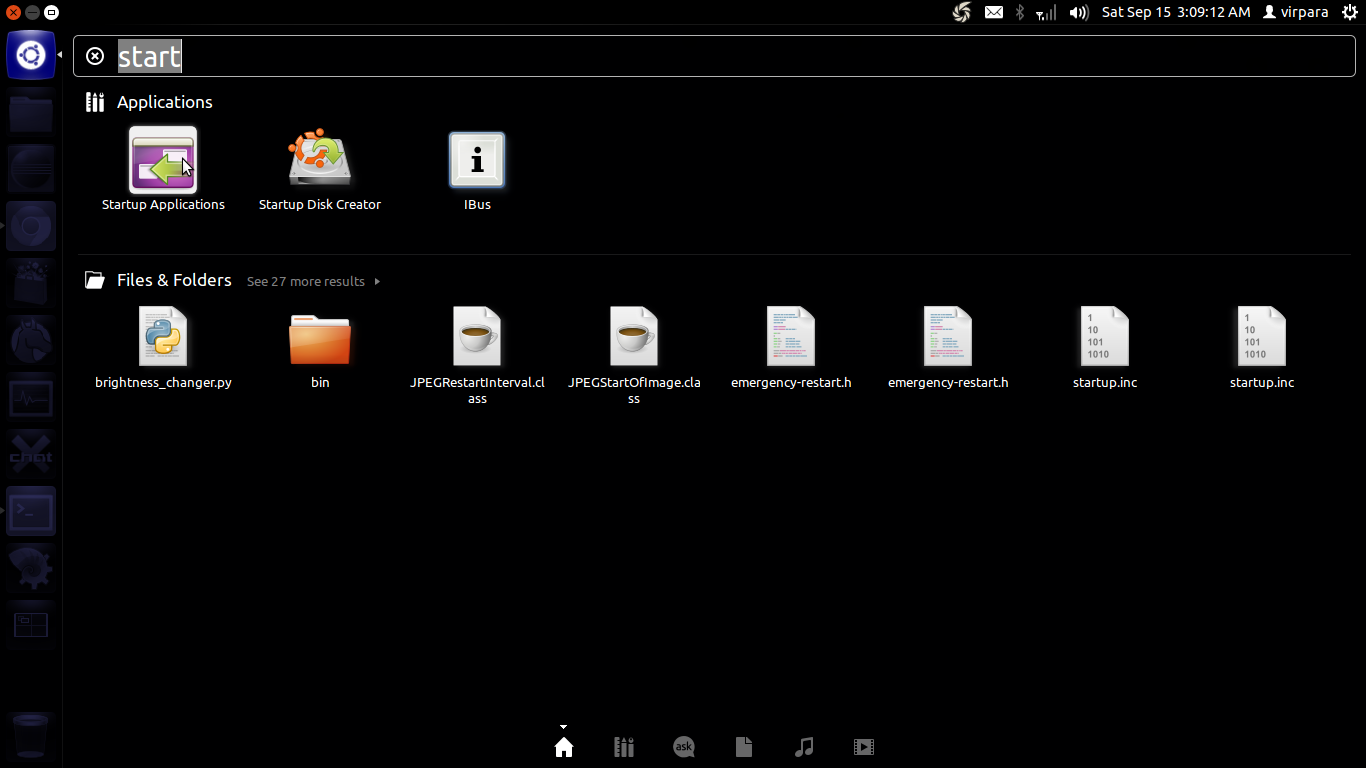 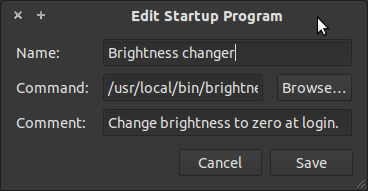 Give path as /usr/local/bin/brightness_changer.py in command and Save it.

Now whenever you login, brightness will be set to 70.

I'm using a HP all-in-one PC. And I cannot make xbacklight to be executed in rc.local, which the reason needed to be explored.

So I just put the

command into StartUp Applications and it helps reduce the screen brightness after login.

Not the answer you're looking for? Browse other questions tagged 12.04 power-management or ask your own question.

0
Screen brightness is always full
146
Brightness is reset to maximum on every restart
37
How do I set default display brightness?
2
How do I get brightness controls working on a Sony VAIO Fit 15E?
1
rc.local not executing command
0
Brightness doesn't decrease in Ubuntu 14.04