I use a Gtk.IconView widget in my app to select different types of elements. The way the IconView works is the following:

I've always found it confusing that an additional double click is needed, when most button-like widgets in the desktop just require a single click. Now I've just had feedback from a couple of users that find it confusing (someone thought it was a bug that clicking on the button "did nothing"), so I've decided to look into how to change that behaviour.

Ideally, I'd like the IconView to behave as follows:

Now I haven't found anything obvious in the widget's properties to make it behave like that. Does anyone know how or if that could be achieved? 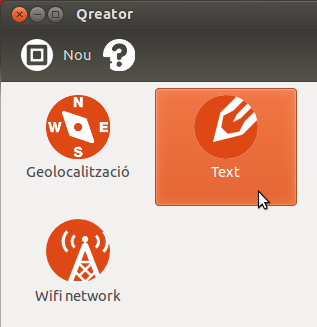 python application-development gtk
Share
Improve this question
edited May 30, 2012 at 21:40

A sample that assumes a working on_item_activated signal would be:

A GtkIconView is not an arrangement of button widgets into a table. It is basically a special case of GtkTreeView, with items laid out in a grid, rather than a list/tree. To do highlight of items on hover, I believe a patch to GTK+ would be required. A patch would also be required to add API to enable single-click vs. double-click to activate, however, this feature can be implemented on top of the existing widget API, by listening to the button_press_event signal on the widget, and acting accordingly.

You seem to explore the limitations of Gtk lately :-)

Tree- and List-Stores are a good choice for collections. Larger amounts of data which are identical in type but different in meta-content (e.g. a music collection where every piece has an artist, album, title, but the actual artist name, album name, title name changes).

The good thing about these widgets is that they are easily sortable, many items can be selected (e.g. in 'rubber-band' mode), and you need relatively few lines of code to add thousands of similar items.

Changing the way a TreeView or ListView behaves to clicks / hover etc on a per application level is a bad idea, because it messes with the way users expect your application to behave. You found that out yourself based on the reaction you describe in your question.

Your problem however is that users did not understand that your widget is a TreeView / ListView, instead they thought that they are a number of buttons. And that seems to make sense, based on your screenshot.

Buttons are meant to start an action (e.g. stop, play, pause) or communicate with the program (e.g. Ok, Cancel) or even act as a link to a different view (see LinkButton). They don't normally have an (abstract) object or item associated with it (e.g. ' "Sammy Davis Jr" by "Movits!" from the album "Out of my head" ').

So, while the not-configurable click behaviour is a shortcoming of gtk, it should anyway only be on a per-user global level.

What you want is probably a grid with Buttons. (Buttons can also contain icons).

Here's how I made my Iconview respond to pointer position to get a hover effect and single left-click and right-click actions.

You have to activate pointer-motion-notify for the widget, and then convert x,y position of pointer to the path of the iconview:

Not the answer you're looking for? Browse other questions tagged python application-development gtk or ask your own question.

7
How do I get started with an Ubuntu friendly GUI framework?
1
Suppose I want to create my own interface in Ubuntu?
5
How to dynamically resize GTK notebook pages
1
Is there a auto-complete tag like control for quickly/pygtk?
7
Create a Gtk Window insensitive to Show Desktop and Won't show in Launcher
2
Possible to download packaged deb file before final publishing on myapps portal?
0
Python Executable Upon Double Click