How do I configure my static DNS in interfaces?

My /etc/network/interfaces file consists of:

I ran the command: /etc/init.d/networking restart

Next I ran ping google.com and received:

I am not sure if my interfaces refreshed. How do I properly configure my network with my static DNS addresses?

As the questioner gives the contents of his /etc/network/interfaces I infer that he is using ifup to configure interfaces. But since he may actually be using NetworkManager, I will discuss that as well.

If you are using ifup then DNS settings go in /etc/network/interfaces. For each interface you add dns-* options appropriate for the nameserver(s) available over that interface. E.g., if a nameserver at address 1.2.3.4 is available over interface eth0, then add dns-nameservers 1.2.3.4 to the iface eth0 stanza.

If you are using NetworkManager then settings are entered in the Connection Editor (network indicator | Edit Connections...) in the IPv4 Settings tab.

Doing /etc/init.d/networking restart to reconfigure interfaces is deprecated. If you are using ifup then first ifdown each active network interface, then ifup each interface. If you are using NetworkManager then, first, disable networking using the indicator (top of the desktop); then open a terminal and run

and then enable networking using the indicator.

Or you can just reboot.

Regarding the fact that /etc/init.d/networking restart resulted in

This means that ifupdown thinks that eth0 is already up. Use ifdown --force eth0 to cause ifupdown to stop believing that it has already configured the interface.

Regarding the "deprecated" message, this message is no longer printed in Ubuntu 12.10 but you should still note that initscripts are "on their way out". To restart a service foo, use service foo restart or restart foo. Note also that if you want to reconfigure your interfaces it is better to ifdown them one by one than to rely on restarting "networking".

If none of the above work, keep it mind that Ubuntu appends a tail file to the resolv.conf file that it generates.

Which will open a blank resolv.conf.d file in the nano text editor. You will need to place your DNS server address on the first line of this file and remember to end the line with a carriage return (hit enter) as seen below:

Editing the tail file instead of the actual resolv.conf file will prevent your change from being lost upon a system reboot.

You will need to run sudo resolvconf -u to activate the change. You should be able to ping google.com after this. Good luck!

If the command above does not find resolvconf, you can download it using:

All of the answers which relate to /etc/network/interfaces incorrectly state dns-nameservers rather than dns-nameserver - below should work:

You should add your nameserver(s) to /etc/resolvconf/resolv.conf.d/base file this way:

Easiest method of configuring your DNS servers is to use NetworkManager

Under IPv4, fill in your dns server(s) 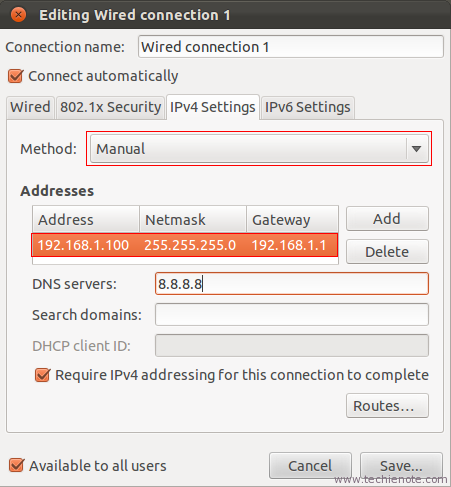 ...after the relevant interface stuff in /etc/network/interfaces:

This worked for me

I use core install of ubuntu server.

Note: carefull using without direct access on the machine, this will cut the connection...

It will reset and release everything...

If it faces with errors related to configuration, you can use:

You are missing a subnet specification in the interfaces file.

I had this problem. I thought i was going mad. Everytime i edited /etc/resolv.conf, it deleted my config. Turns out some total lunatic has distributed debian with network-manager, which is overwriting all my network settings.

This is how i fixed it:

This gets rid of this horrendous new tool that stops all the configs from working properly.

Congrats, you now have sane configs that work again.

For some reason the dns-nameservers statement does nothing in my case. And the other answers are not by the book, as they bypass dnsmasq as it is utilized in Ubuntu.

To do this right, edit /etc/dnsmasq.conf

Add your nameservers to the bottom of the file:

You might configure that interface in an other file too, since you have more gateways.

Most distro you can setup your DNS SERVER over the path

1
Interface configuration - Internet not working
17
ping 8.8.8.8 works but ping www.google.com doesn't
4
Does creating a SOCKS proxy via ssh hide my activities from my ISP?
1
Can't Change IP to Static
0
NIC Teaming under Ubuntu 16.04 - Can only ping DNS servers and nothing else
1
Unable to ping anything but local host from ubuntu