Where is the boot loader installed?

Where is the boot loader, such as Grub, installed generally?

When I install 12.04 along side Windows on different partitions of my disk, I encountered a choice for "Device for boot loader installation". If I understand it correctly, it is to specify where to install the boot loader Grub,

I found on the internet that it is to specify the disk that contains the partitions for the OS, not any partition on the disk. E.g. disk sda, not partition sda1, sda2.

I wonder where the boot loader installed actually on the disk?

Is it installed on any of the existing partitions for the OSes and for personal data, or does it have its own partition, which is also visible e.g. from system monitor of Ubuntu?

The boot loader needs to be installed where the BIOS is looking for something to boot. To keep things simple, you usually have a disk drive where your computer boots from, you install a GNU/Linux system in that disk and the bootloader gets there too.

The only things you need from the bootloader are really:

As far as you have these two points covered, you install it where it is more convenient and where the BIOS will look for it.

The BIOS will usually look for bootloaders in the Master Boot Record of hard drives, a small area in the beginning of the drive where you can put some code to be run. You can also have a bootloader installed at the beginning of a partition.

Bootloaders are usually small enough to fit in these small areas, and even if they don't, they must put something there so the BIOS boots the bootloader.

lilo is a simple bootloader which is installed in those areas. grub is a bit bigger, and so you install some code in those areas, which, then, loads some more code from a disk partition (where grub is said to be "installed", where its configuration file lies, along with the binary code, this is usually set to be the system /boot partition, where kernels and initrds are placed too, for convenience).

In this case, if it is prompting you for the disk, this means it's asking you on which Master Boot Record should grubget installed, that is, the disk you will be booting the computer from. That part of grub will be installed only on the disk MBR. The rest probably gets installed to the same partition as / or /boot/ of the Ubuntu system you're installing (and that rest is accessible from Ubuntu, look for directories /boot/grub/ or /grub/).

Grub2 is the standard boot loader for Ubuntu. As always we prefer to have highly configurable applications. Grub2 is one of these. Grub2 will install exactly to where you told it to, irrespective of this being a good idea or not.

The usual case will be the Master Boot Record (MBR) of the drive you boot your computer from. This is most likely your first (or only) harddisk /sda. This will also be the default option when installing Grub2.

Of course this boot device can also be another harddrive, a SSD, or even an external device. Then you will have to tell Grub2 where you want it to be installed when it asks you.

The case where you need to install Grub to a partition is rare but still it is possible, e.g. in case you use another bootloader and chainload Grub from a partition boot record.

Other bootloaders are located in the MBR as well. Grub2 will overwrite these and thus you will no longer be able to boot with these. Grub2 will take the role to boot the OS you chose from a menu displayed on boot.

The Grub application, and the settings will not fit to the master boot record due to their size. Therefore they will be installed elsewhere (again you can configure this). Usually and per default Grub2 looks for it's files on the root / partition where you installed your Ubuntu, but this can also be any other partition on any of your harddrives.

Some people believe that it is a good idea to have a separate dedicated boot partition for this. But you will only need this in special cases, e.g. if you installed a UEFI BIOS which needs a GUID Partition Table (GPT) to boot from.

It's exactly where you chose to install it when you installed Ubuntu. ubiquity prompts you for this information during installation. See below: 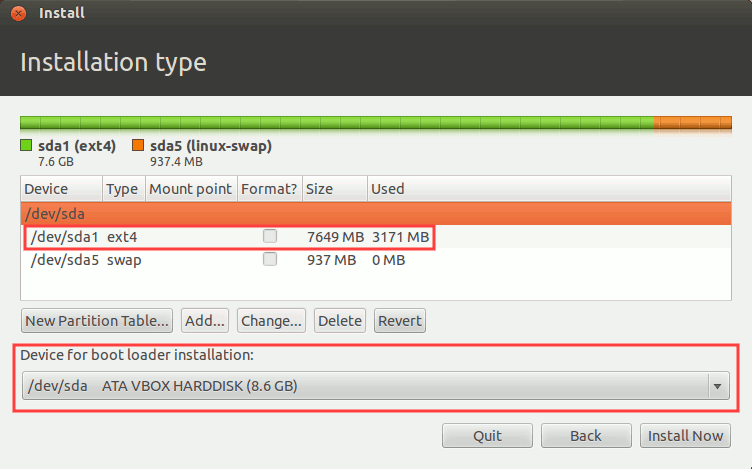 I spent an hour trying to find the configuration of where GRUB is installed in Debian, because it's not stored in GRUB's own configuration files.

1
Which partition should I install the bootloader on?
1
Where should boot loader be installed?
0
Where is Grub boot loader installed on the computer?
2
Questions about MBR/GRUB
1
Ubuntu's GRUB bootloader not getting detected after drive change
1
How to "see" the actual files used as the bootloaders?