In Unity, how to see the "real window" when being dragged with the mouse?

In Unity, while moving a window, its "shadow" moves first, then, when the mouse is released, it's actually moved to the desired position. 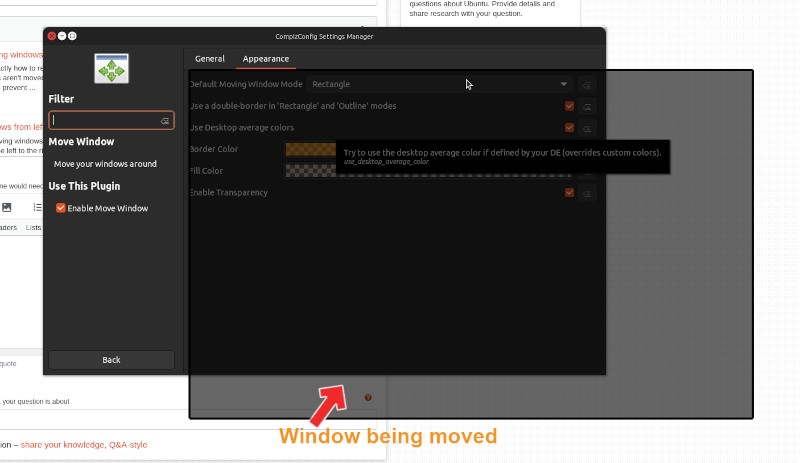 Is there a way to have the actual window moving, not its "shadow", while it's being "held" by the mouse?

Note that I changed the GUI from Gnome to Unity, and in Gnome the actual window is being moved.

I installed a fresh Ubuntu 22.04.1 with Unity on a new FS. And the windows move normally there, meaning the full window is moved / refreshed along the way. So that's possible!

Note that my account is on a separate FS, shared (mounted) by the 2 Ubuntus when they're on. And I removed the .config, .gnome, ... settings so that the new Ubuntu would have to recreate them.

After a while, I booted back to the original Ubuntu on the other FS, and, surprise, windows are moved the wrong way, same as before. I was expecting the new "good" config created by the new Ubuntu in my account would make the old Ubuntu, now using the new config, behave normally. Some "bad" settings must probably be in the system, not in my account.

And even more surprising: while I didn't change anything in the config of the old Ubuntu, just logged in and bye, it still managed to overwrite my config so that the new Ubuntu would now change its behavior! The new Ubuntu caught the "wrong" move pattern :(

you can change the settings related to windows opacity/transparency using compizconfig-settings-manager explained in: How can I make my windows transparent

go to CompizConfig-Settings-Manager > Accessibility and check Opacity, Brightness and Saturation

Ok, found the answer, after a lot of research and dconf dump / analysis.

Simply, the parameter lowgfx in dconf drives wether the low-graphics mode should be enabled, or no.

Mine was set (from dconf dump)

By setting it to false,

33
How can I make my windows transparent by doing Alt+Mouse Scroll?

3
How to make Unity Launcher menu be almost always hidden and not influence window placement
1
Launcher sometimes doesn't show with the mouse
1
Slow window movement with unity on AMD 6950
2
How to make windows resist overlapping each other?
1
Mouse clicks won't respond in the majority of the work area Ubuntu 15.04 w Unity + Dead Unity
2
I can't click on things with my mouse anymore [Ubuntu 15, Ubuntu 16, Unity, Gnome]
18
How to disable mouse interference with Alt+Tab?
8
How do I move the window menu to the window title bar in Ubuntu 18.04?