I'm aware that the general consensus is that Photoshop is at best barely usable under Wine. I'm one of the lucky few that got CS2 (apparently one of the least quirky) running well under Wine 1.4 in Ubuntu 12.04. All the mentioned quirks like the crashes provoked by the text tool are not present. With the -for my practical purposes- unimportant exception of Bridge refusing to start, the rest is working just fine.

The only grave quirk it has is that on closure, it messes up completely the Unity desktop, lossing automatically the 3D appearance, leaving me with a D2 desktop, square cornered windows and without the (x)(-)([]) buttons and windows title. This forces me to close the windows by means of Ctrl-Q and eventually a reboot to get back the correct desktop and window appearance.

In the likely case there's no solution to this behaviour, is there a command or script I may use to restore the usual desktop? That would allow me to place a launcher to that effect.

I'll appreciate any comment not in the lines of looking for a Photoshop substitute. I've been through all and they won't let me do in a practical manner what I need.

Many thanks in advance. 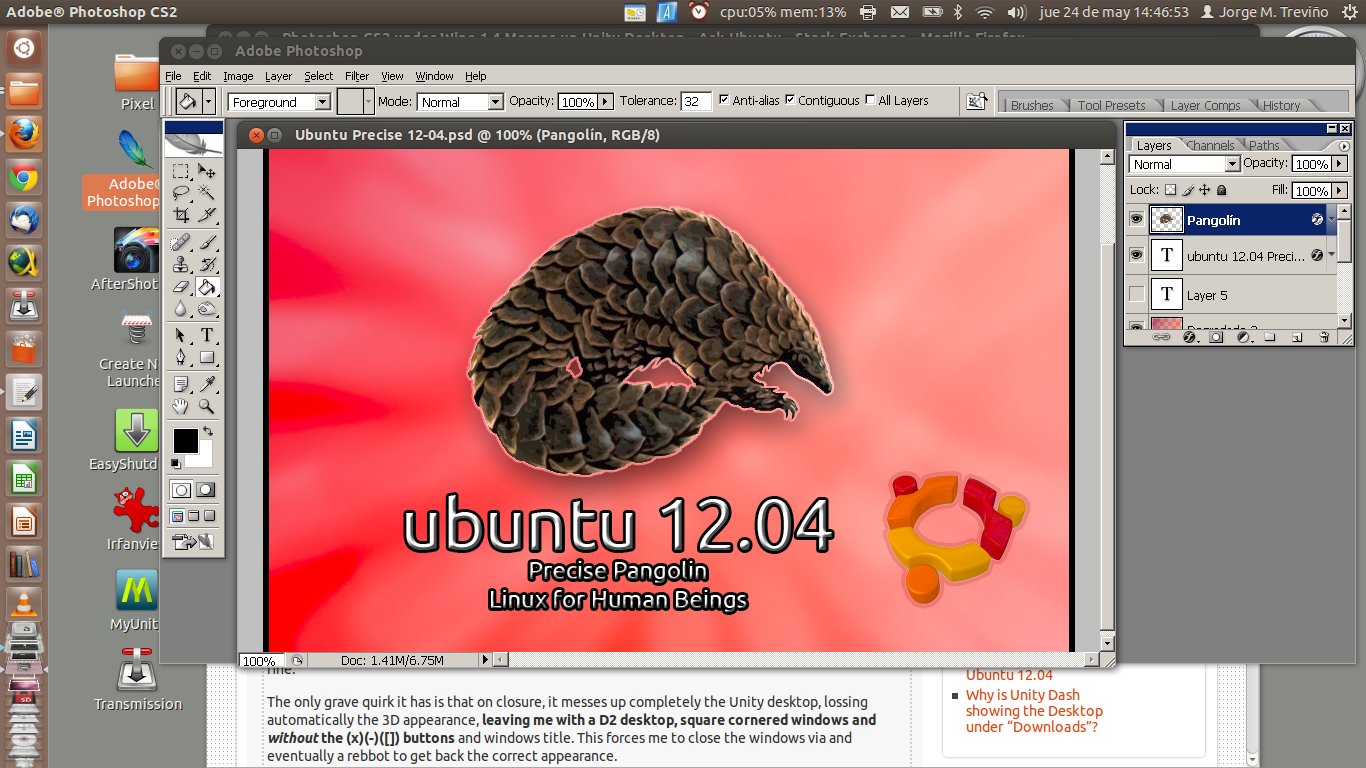 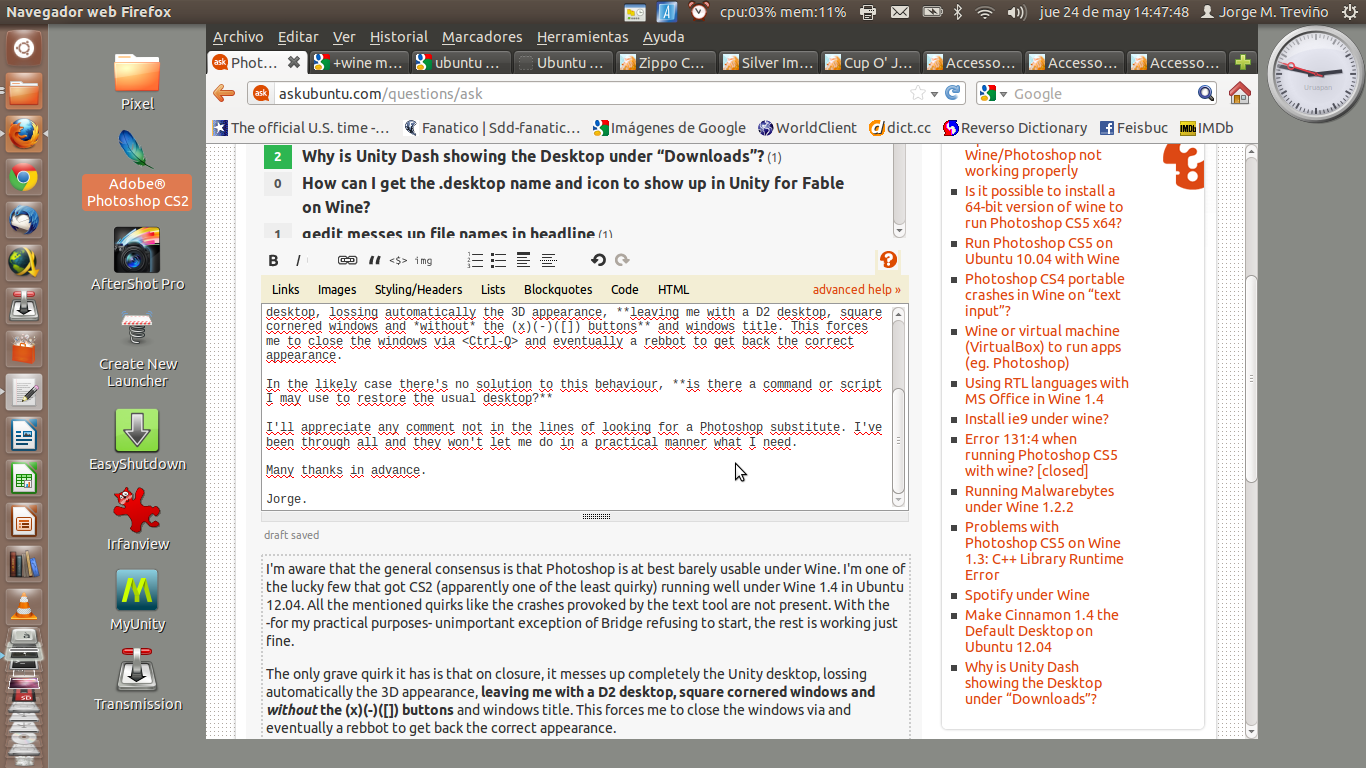 Eliah Kagan and Alvin have helped me to pinpoint the problem to the 3D session. Thus, so far the solution involves logging-out of the 3D session and logging back-in with a 2D session before starting Photoshop; then it exits normally and doesn't disturb the desk.

Of great help would be a way to switch-off the 3D effects without having to log-out, and then back-on, if it is at all feasible. Of even greater help would be a BASH script to automate this.

jasmines' suggestion to do a compiz --replace doesn't terminate correctly, although while the order is still in a loop the desktop appears normal. However, closing the terminal or breaking the loop reverts the session status to a crippled desk, no top panel, no launcher, no window top bar & controls and now; no keyboard.

The final output of the compiz --replace where it gets stuck is this:

Hopefully somebody can decode this. It's sanskrit to me. The solution to the problem is still at large...

See virpara's answer. I created the script by his suggestion and placed a launcher to it in my desktop. Works like a charm and solves my Photoshop exit bad manners in less than a minute :-)

Adding 3 screen captures of before, during and after. 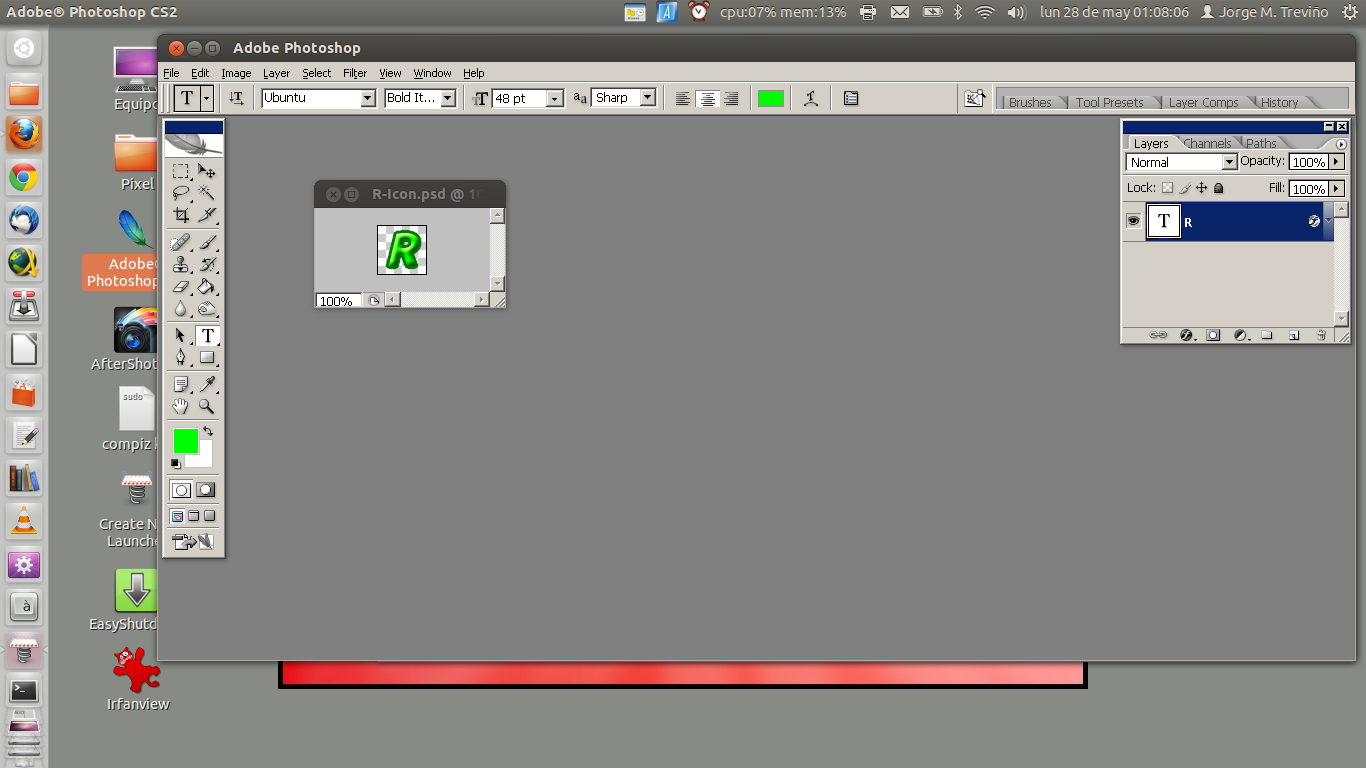 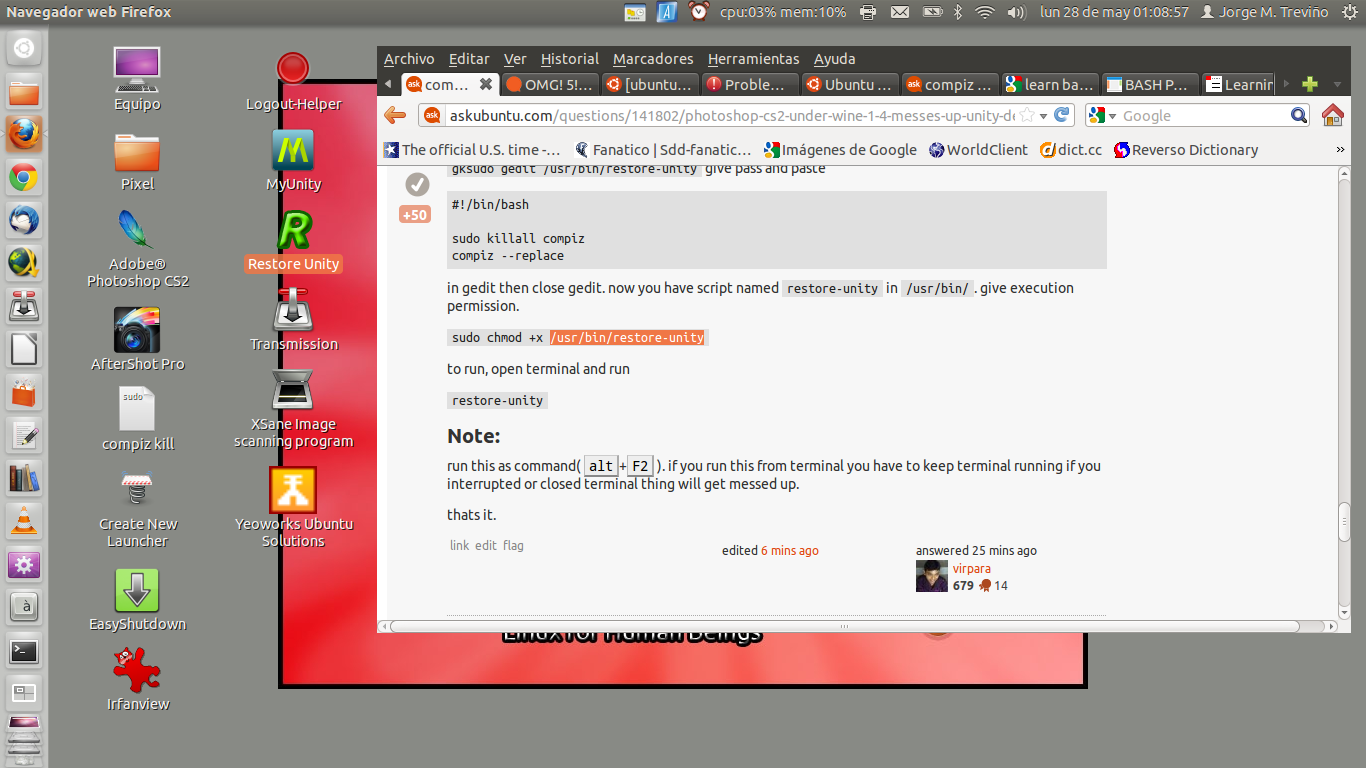 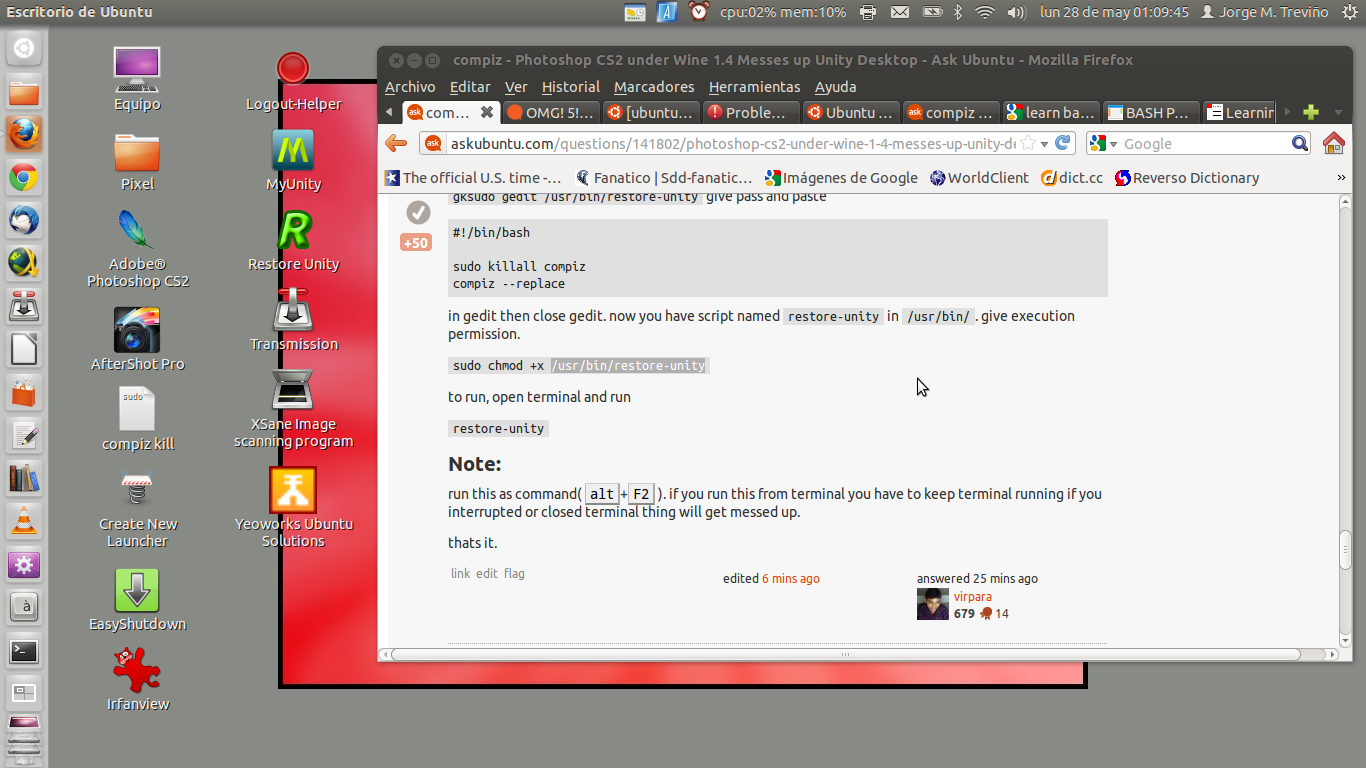 Beautiful. This place is a wealth of knowledge. Many thanks to all who participated.

answering because is says script to restore Unity 3D without rebooting will do.

in gedit then close gedit. now you have script named restore-unity in /usr/bin/. give execution permission.

to run, open terminal and run

run this as command( alt+F2 ). if you run this from terminal you have to keep terminal running if you interrupted or closed terminal thing will get messed up.

Is compiz still running? If so, try kill it and then restart it:

Report back for errors!

Jorge M. Treviño(OP) wrote( these are comments by OP i have included for future reference):

Similar warnings followed... I don't know how to place them here.Then

but YES! that got me back the top panel, the launcher and the 3D windows!

Oops! Hold your horses please guys. I was hasty saying it solved the problem.

The terminal was stuck just after the output G_IS_OBJECT (object) failed and I didn't notice that I didn't get a prompt back. Breaking the compiz --replace order with a Ctrl+C left me with the crippled desk again. I'm going to try this again in 2D mode and see what happens...

No go, the output is:

OK, the sum is this: compiz --replace, even in a 2D session ends stuck in an error loop with two warnings about the interface «org.ayatana.bamf.view» not existing. Terminating the loop with Ctrl+C cripples the desk. Again, ideas?

Just use Alt-F2, "compiz-decorator" - will restore frames without compiz restart.

I have been able to restore the menus with a:

but I'd much rather it didn't die. If anyone hears of a fix for the problem(s) causing the crash, it would be appreciated.

Just to note - you're probably experiencing a known bug in 12.04 & wine that affects many programs in wine, though others are ok

Not the answer you're looking for? Browse other questions tagged unity compiz wine photoshop or ask your own question.

0
everything changed in my Desktop after running a command, can anyone help?

1
Open with Wine/Photoshop not working properly
0
compiz --replace not finishing
0
Photoshop on WINE 1.4
0
Problems with Photoshop on Wine
3
Unity not working after upgrade Ubuntu 13.04 to 14.04
2
Can't run photoshop CS2 on Ubuntu 14.04 x86_64
1
How to reenable unity - tried the standard stuff