Take a screenshot of webpage at intervals?

I need a way to refresh a certain webpage and have a screenshot taken approximately every 5 minutes. I'm new with Ubuntu, but willing to use terminal, etc. If steps are given, I've used it before, I just don't know how to go about writing my own scripts.

Ideally, I would have the webpage open, and the page would refresh and take a screenshot every 5 minutes. Any help with this?

The screenshot app 'shutter' has what you are looking for.

In a terminal, do sudo apt-get install shutter

There is no GUI way to do this every five minutes with shutter, but we can make it do the job with the command line.

Copy the following into gedit:

Replace WWW-HERE with the address you would like to screenshot. Now save it in your home folder with a name that you can remember and wish to call it with.

Open a terminal and do chmod +x FILE and then sudo cp FILE /usr/local/bin Remembering to replace FILE with the name you chose.

Now you can open a terminal and type the file name you chose to start it taking screen shots every five minutes. To stop it, press Ctrl + C on your keyboard. If you want it to keep going until you logout, you can just type the name you chose after pressing Alt + F2, and it will keep going forever in the background.

To save the files somewhere else or with a special name you can add the --output flag to the shutter command(before the -e!). So change that line to read something like this for example:

This saves to folder called Shots (must exist!) in your home folder, and names the file given the time and date.

Alternately you can open shutter and navigate to Edit > Preferences and select a directory there where you would like to save. 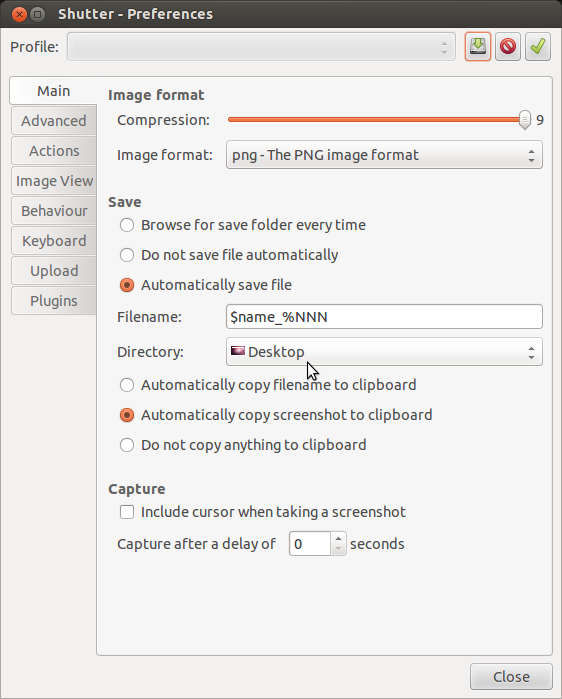 An example screenshot of today's google doodle is here.

Note: I haven't tried this but you could use something like scrot (to take the screenshot) and an "at" command to do the the trick. Here's two resources that might be helpful:

Screenshots from the terminal: http://tips.webdesign10.com/how-to-take-a-screenshot-with-ubuntu-linux

Using the "at" command: http://www.ibm.com/developerworks/linux/library/l-job-scheduling/index.html

I once had a script to take a photo of my screen every minute and upload it. I've tried to create something similar for you here. As Mordoc mentioned, you can use scrot

. You will have to sudo apt-get install scrot first.

Here's the script. The lines starting with "#" are comments, so I'll use them to try and explain it:

Before you try go too far, stop and see if this works.

At a command line, type sudo crontab -e. (If it asks you which editor, choose Nano. If you haven't used it before, ask around for some help).

In the file, you want to add a line at the bottom, like this:

Well, I hope this long post helps! There might be ways to do this without the command line, but you'll have to look around.

Give a try this tool : http://www.domdigger.com/ It's not every 5 minutes, but if one-hour interval is enough for you, it's perfect for your needs.

Not the answer you're looking for? Browse other questions tagged 12.04 screenshot or ask your own question.

18
How to take a screenshot every n second?