How can I get this back to work ? My whole password manager integration is now broken thanks to snap. People with 1password will have the same problem.

Regarding "duplicate for ppa install over snap" I'll copy my comment: technically yes, but it's a nice hack and ultimately a workaround (and if you're just trying to get some native transport working after upgrading, it is not the thing you'll search for).

Update: Native messaging support in the Firefox snap is now available as beta. Beware that this is pretty fresh - the code hasn't been merged upstream, yet, so don't expect this to be production-ready. There is also a German article by Heise Online with a step-by-step guide on how to get this going - in case you want to give it a try.

Unfortunately this issue can't be fixed on KeePassXC's end and so far neither Flatpak nor Snap support NativeMessaging, yet (their sandboxing techniques prevent the browser extension from talking to the KeePassXC process). While work on a solution is in progress, all we can do is work around this issue (or switch to a distro which still provides browsers as regular packages like Debian). The KeePassXC Troubleshooting guide recommends installing the browser from the official PPA. This isn't pretty but the following approach worked for me:

This approach has the drawback that AppArmor is disabled completely - beware that this weakens security. Maybe someone with more AppArmor experience can contribute a safer way to get NativeMessaging working again?

A few tips in case you run into issues:

As an alternative to the other answer (without PPA), simply use the official version from mozilla.org.

It can be used as static/portable installation, the executable is path/to/firefox/firefox. It can also be installed system-level as said here (as per comment by @mook75), something which copies that folder to /opt, creates needed symlinks (so that a command like firefox starts the browser), and provides a launcher.

Testing in 22.04 (portable) I have found no limitations compared to the previous non-snap version, all addons work, there is just the fact that update has to be done with a click in Help - About Firefox. 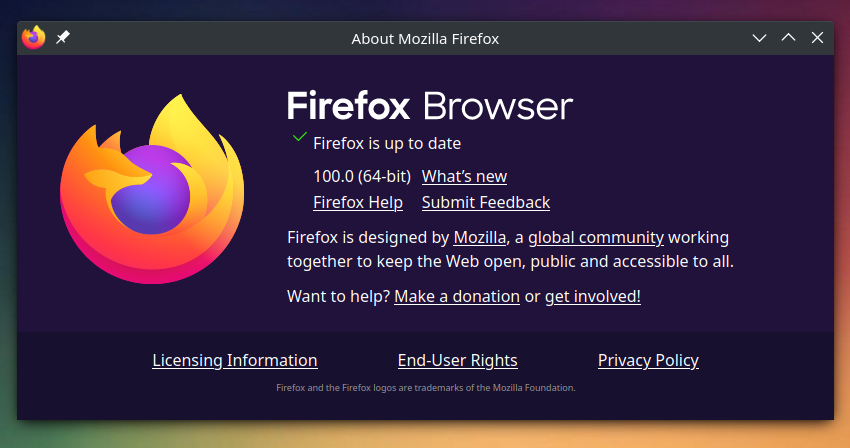 With portable install we need to create a launcher for it, manually or with a menu editor like Alacarte or KDE Menu Editor.

I prefer to use the Firefox Snap Beta with native messaging support (as mentioned by others), over the other alternatives which also have their drawbacks. Install it with:

On a fully updated Ubuntu 22.04 LTS, I did not have to do any additional steps mentioned in the Heise article, such as systemctl --user restart xdg-desktop-portal.

The Firefox beta (105.0b3) works well with KeePassXC (2.7.1) from the official PPA and the Firefox KeePassXC-Browser extension (version 1.8.1). Other KeePassXC packages did not work for me. Install KeePassXC with:

This is a known issue, and a fix is underway, expected somewhere in June

AFAICS this is fixed now.

Not sure if the KeePassXC integration is already working, but other native-messaging apps are.

Just check them with:

And add a permission with:

1
Firefox migration to snap breaks native messaging extensions
72
How to install Firefox as a traditional deb package (without snap) in Ubuntu 22.04 or later versions?
26
How can I add and change items in my Applications Menu?