Is it possible to avoid Firefox as Snap installation and keep deb-version on Ubuntu 21.10 flavor?

Then I ran update-manager manually to check and get some new updates.

It showed a surprise for me - it will remove Firefox deb-package as shown on below screenshot to replace it with Snap: 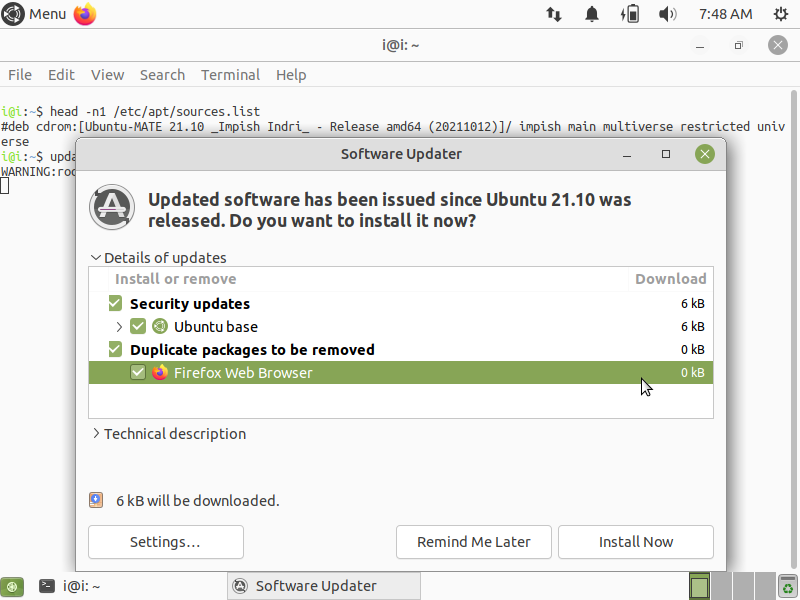 This is not acceptable for me, I want to use normal deb-package of Firefox.

Note: actually the result does not depend on online or offline installation, the first launch of update-manager will try to remove the Firefox deb-package.

A way to disable such behavior and continue to use deb-package of Firefox is to mark Firefox package as manually installed by using command below:

and then launch update-manager again and get no surprises.

I think that this behavior is a bug, so reported it at Launchpad as bug 1947501.

The above method also solves the problem for Ubuntu Budgie, UbuntuKylin and Xubuntu. Kubuntu, Lubuntu and Studio may be affected if user have installed update-manager here manually.

or just use this ppa: https://launchpad.net/~ubuntu-mozilla-security/+archive/ubuntu/ppa regards

Not the answer you're looking for? Browse other questions tagged firefox snap ubuntu-mate deb 21.10 or ask your own question.

1
How to install/upgrade Chromium offline?
114
How to install Chromium without snap?
0
Is the vanilla version of the Snap-Store able to deal with .deb and apt?
5
Double Firefox icons and can't uninstall Firefox after upgrading Ubuntu from 20.04 to 21.10