How to install nvidia drivers without breaking my system?

I have an nvidia 1050ti. Recently installed kubuntu 20.04.3 and allowed 3rd party software during installation. After installation when I try to boot it just stays loading at the splash screen after grub, so broken system right after installation.

From recovery I tried ubuntu-driver autoinstall. This allowed me to at least get to the display manager but the scale is off, everything looks small, and I get micro-freezes, like every second I lose some frames or something. I uninstalled the nvidia drivers and that fixed the problem. However nouveau leaves a lot to be desired and I would like to have proper drivers installed.

I also tried to install without allowing 3rd party software, and the result is the same. It all works all right without the nvidia drivers but the moment I install them, either with ubuntu-driver or directly with apt, everything breaks.

I tried nvidia-driver-390 , 460 and 470. None works. Just as a note I also had a similar problem with debian and recently with arch, which never managed to fix either.

since you said trying nvidia-driver-390 I can suggest you try some solutions. The first one is trying to get the drivers from Software & Updates, under the "aditional drivers" tab. 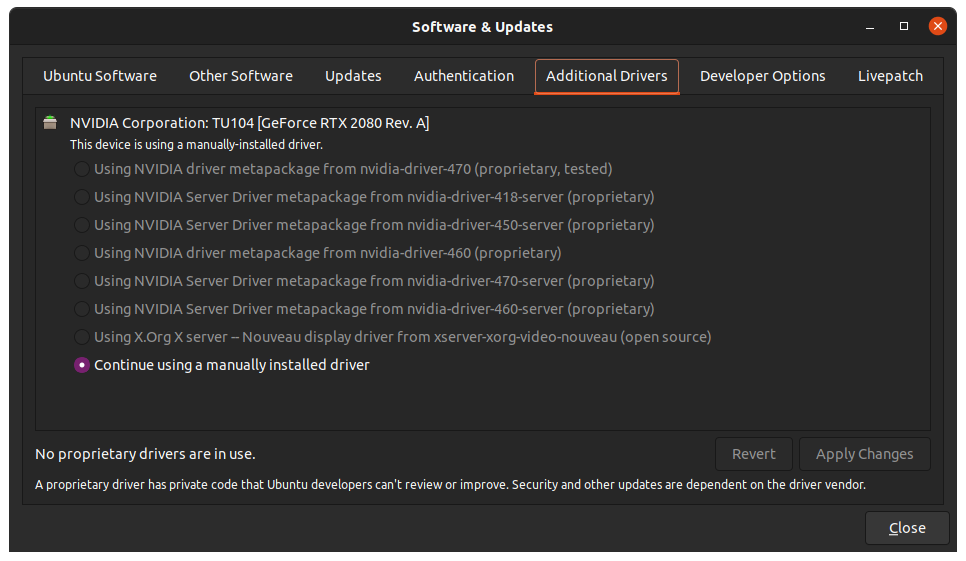 In my case I already installed Ubuntu with the proprietary drivers, but you could try selecting the first option: proprietary, tested.

If it doesn't work you could try to purge any existing Nvidia drivers and reinstall them, you can do this by typing this on your terminal:

Please be aware there's a dependency between one of the packages that will be removed and ubuntu-desktop, therefore you may as well need:

Then try to reinstall them via terminal, and search for the adequate drivers using:

If nothing works, since you already tried Arch, you could perhaps try installing Ubuntu, it supported my card out of the box, or Fedora, which is RPM based, it has good out of the box support for Nvidia as well.

Now as a personal recommendation since your system is already broken, the Ubuntu installer includes Nvidia drivers, so I suggest you go for it instead this time, since you can change to a flavor anytime with

I don't know if the installers for the flavors are different, but Ubuntu's supported my card, it's what I can suggest. Good luck!

Not the answer you're looking for? Browse other questions tagged drivers 20.04 nvidia graphics kubuntu or ask your own question.