Should I use MBR or GPT when I intend to use both Ubuntu and Windows?

I installed a new Samsung 870 EVO SATA SSD in my desktop. I want to install Ubuntu 18.04 on this SSD, so I can have Windows on my main SSD, and then Ubuntu on this SSD (effectively a dual boot machine). When I plugged it in, it asked me to initialize it as GPT or as MBR. Which one is better for Ubuntu? 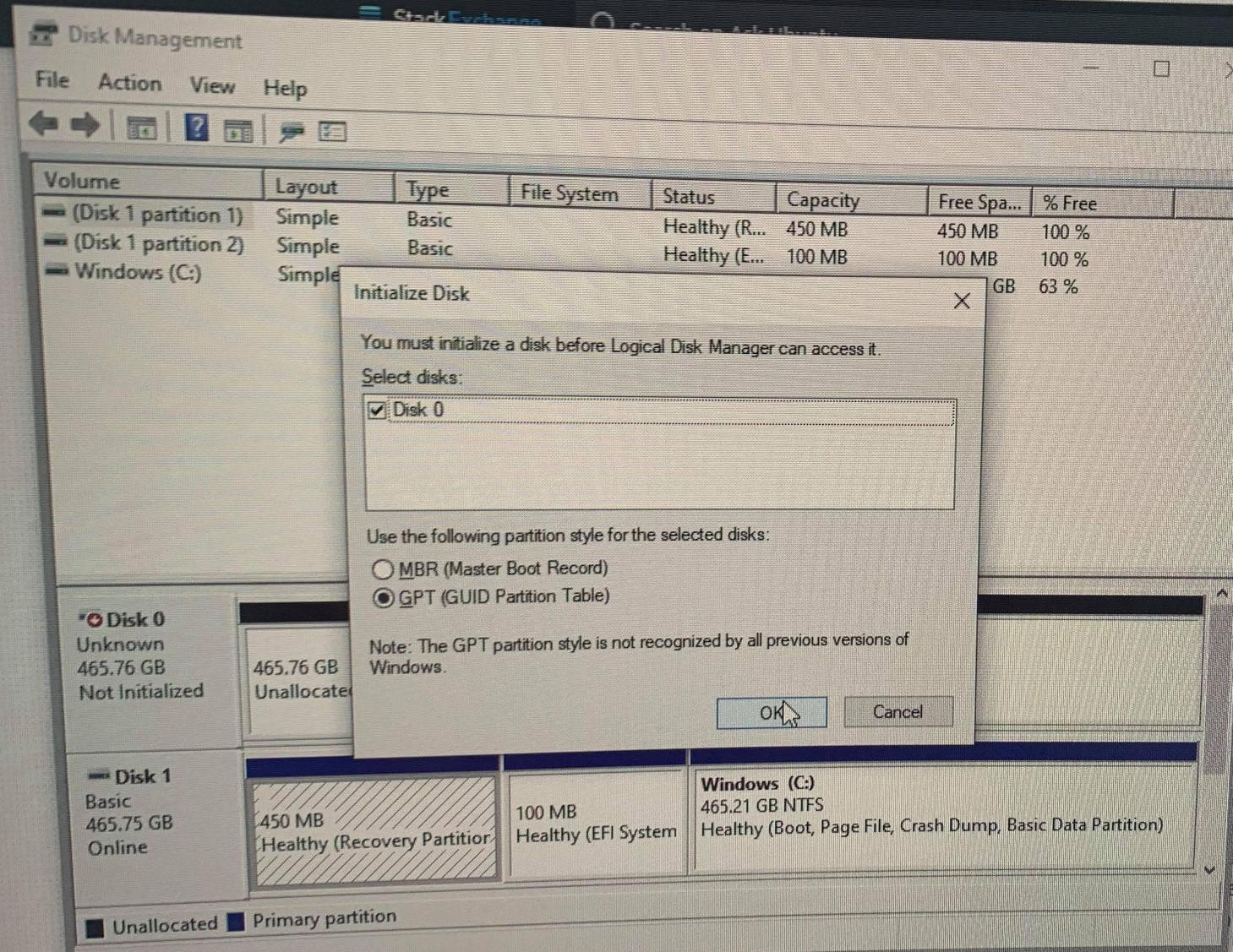 Either MBR or GPT would work.

MBR is limited to 4 partitions... but due to a bug in Microsoft's Windows updaters, major Windows updates tend to wipe out MBR Linux partitions and GRUB (on single-drive installations). MBR tends to be used on older BIOS computers.

GPT doesn't have the partition limitation of MBR, and it looks like your Windows disk is probably set up as GPT, and it's good to have them setup the same way. GPT tends to be used on newer UEFI computers. Disks that are 2TB or larger must use GPT.

Don't use the Windows Disk Management application to format/init the SSD disk that's going to be used for Ubuntu. Only use Disk Management for work in Windows, and with NTFS partitions. Use gparted to work with Ubuntu and ext4 partitions. Boot to a Ubuntu Live DVD/USB, then use gparted to lay down a fresh GPT partition table (this will wipe the drive), and then use the Ubuntu Installer.

Before using the Samsung SSD, I'd check that the firmware is current. Use the Samsung Magician software that can be found at https://www.samsung.com/semiconductor/minisite/ssd/download/tools/. This tool runs under Windows.

Ubuntu's bootloader GRUB will only load Windows if Ubuntu and Windows are both either BIOS or both UEFI.

It is best therefor to initialize both Windows and Ubuntu as GPT.

Unplug the Windows SSD when installing Ubuntu. When done plug it back in, boot Ubuntu and run sudo update-grub to put Windows on the GRUB boot menu.

Both Windows and Ubuntu support both MBR and GPT alike with no issues.

What can be different:

It's debatable which is better in different environments. But setting the second SSD to the same technology as the first will lead to less potential confusion in the future. So if your first SSD is formatted as GPT set the second one the same.

If your main SSD is in GPT, then I would advise on making the 2nd SSD GTP too. And vise versa. P.S. instead of dual boot, why not try virtual machine. It's more convenient.

I don't think it matters in your case; both MBR and GPT are supported by both Windows and Ubuntu, and the 2TB limitation for disk size on MBR isn't relevant to the disk size you have (and I presume you're not planning on having more than 4 primary partitions which MBR is limited to). I'd personally probably go with GPT as it's more modern, but there's not much advantage in your particular case so you may prefer the very well established MBR.

As the other answers already explained, you can conceivably use either GPT or MBR and it will work just fine. However, there's one major advantage of GPT, and that's reliability/resilience.

The MBR partition table is stored in a single disk sector right at the beginning of the device. Should anything bad happen to that sector (say, disk block going unreadable, or you accidentally wipe it with a single typo in a dd command), all partitions on the disk will be gone and you'll have to recreate the partition layout by hand.

In contrast to that, GPT keeps a second copy of all of its data at the end of the disk. If the primary GPT at the beginning becomes unusable for any reason, it will get automatically repaired using the backup copy and you won't likely even notice.

288
How to use manual partitioning during installation?