I develop most of my code in Git repos, now that I've become slightly more active on Launchpad I've started picking up Bazaar which has two "small" difference from Git's workflow that ride against how I usually develop code. While I don't mind using Bazaar I've noticed that Launchpad has options to use multiple VSC tools 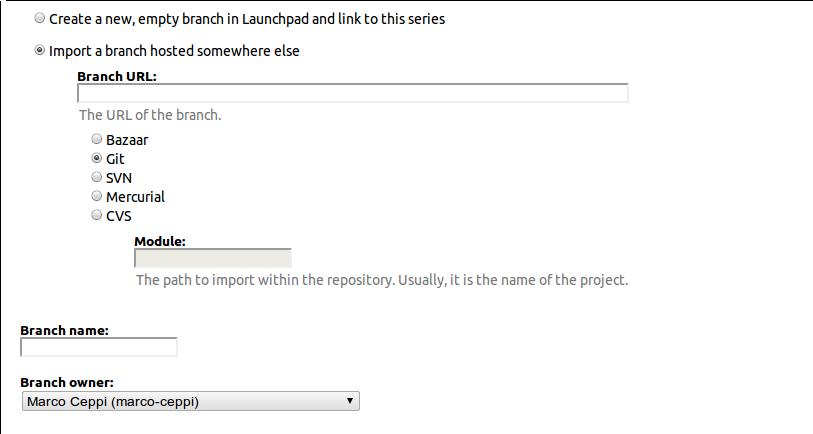 I'm curious exactly how this works with Launchpad with an emphasis on the following:

Multiple git branches are not currently imported - this is being looked at & can be followed at https://bugs.launchpad.net/launchpad-code/+bug/380871

Writing to the branches on launchpad is not supported, according to http://blog.launchpad.net/code/git-branch-imports-now-in-public-beta

From what I've seen of import history for projects, the branch mirror is updated every 4-6 hours.

Note that recently git support was added to launchpad: http://blog.launchpad.net/general/git-code-hosting-beta

Not the answer you're looking for? Browse other questions tagged launchpad git bazaar or ask your own question.

1
Kdevelop and git, commit button disabled
0
Where to put git "remote" repo on purely local git setup?
4
Bazaar error when branching a Launchpad repo
1
Problems starting to use Launchpad
3
Why aren't commits to this Git repository showing up in a branch on Launchpad?
21
How do I submit a patch to a Launchpad project?
1
How to import an arbitrary GIT branch into a Bazaar repo on Launchpad?
1
Where are official version control repositories for source code of Xenial Xerus packages?
2
Can't access git repository of ubuntu 16.04 LTS from another OS
2
How can I push a personal git repository on Launchpad?