I very recently bought a computer with the followings specs:

I am trying to install an Ubuntu (preferably version 18.04) dual boot alongside windows 10. I have tried installing both Ubuntu 18.04, and 20.04. When I try installing 20.04, I get the same error as the person in this reddit thread who has the exact same SSD as me. As they state in their reddit thread, they tried many different things but ultimately were only able to successfully install Ubuntu once they got a different SSD. I have followed this tutorial as well as this tutorial.

Here is a picture of the error I get when following the second tutorial I mentioned (for Ubuntu 20.04): 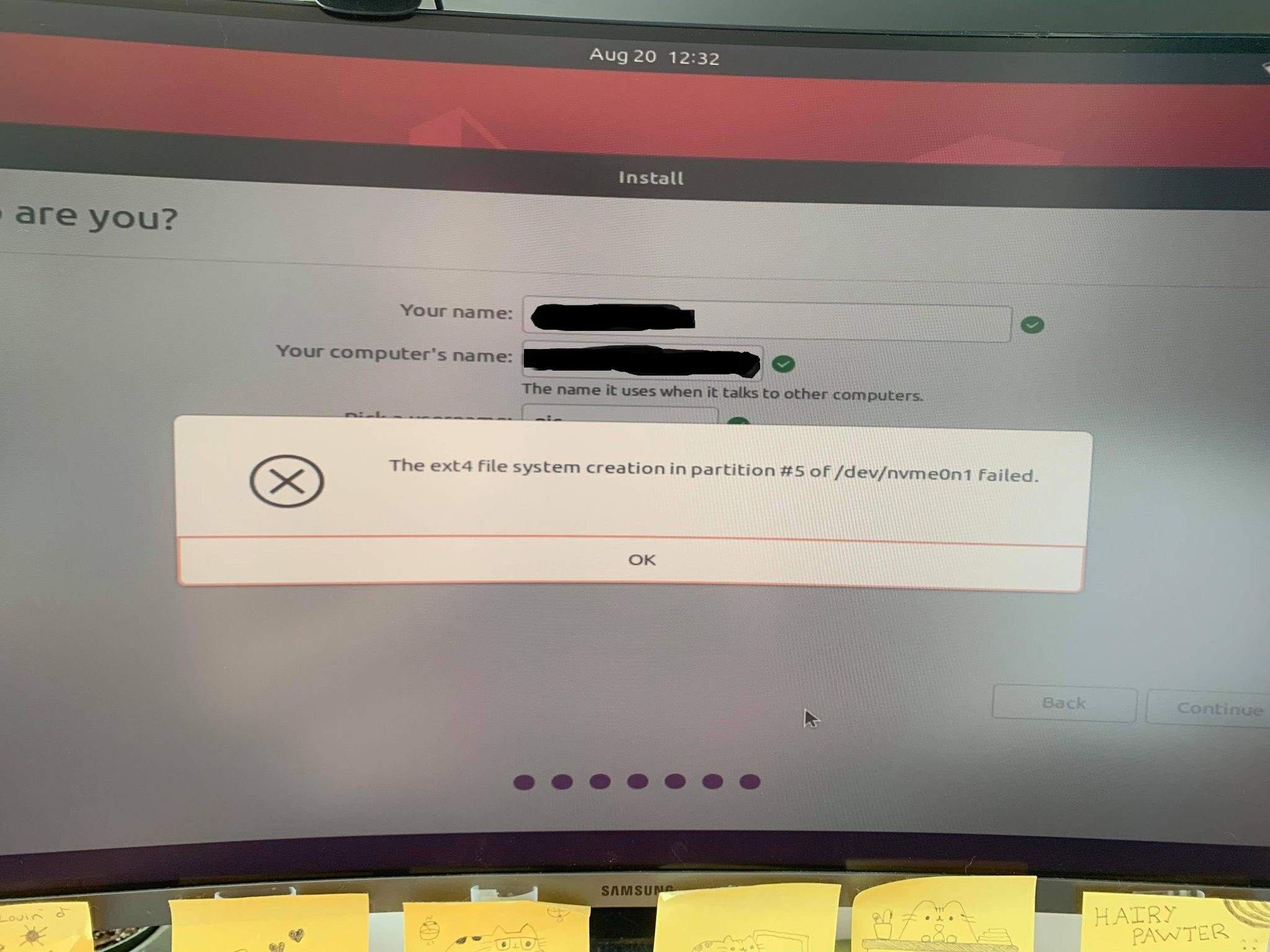 Here is a picture of the error I get when choosing to install using "install alongside windows" instead of "something else" (for Ubuntu 20.04, without partitioning the SSD ahead of time in Windows): 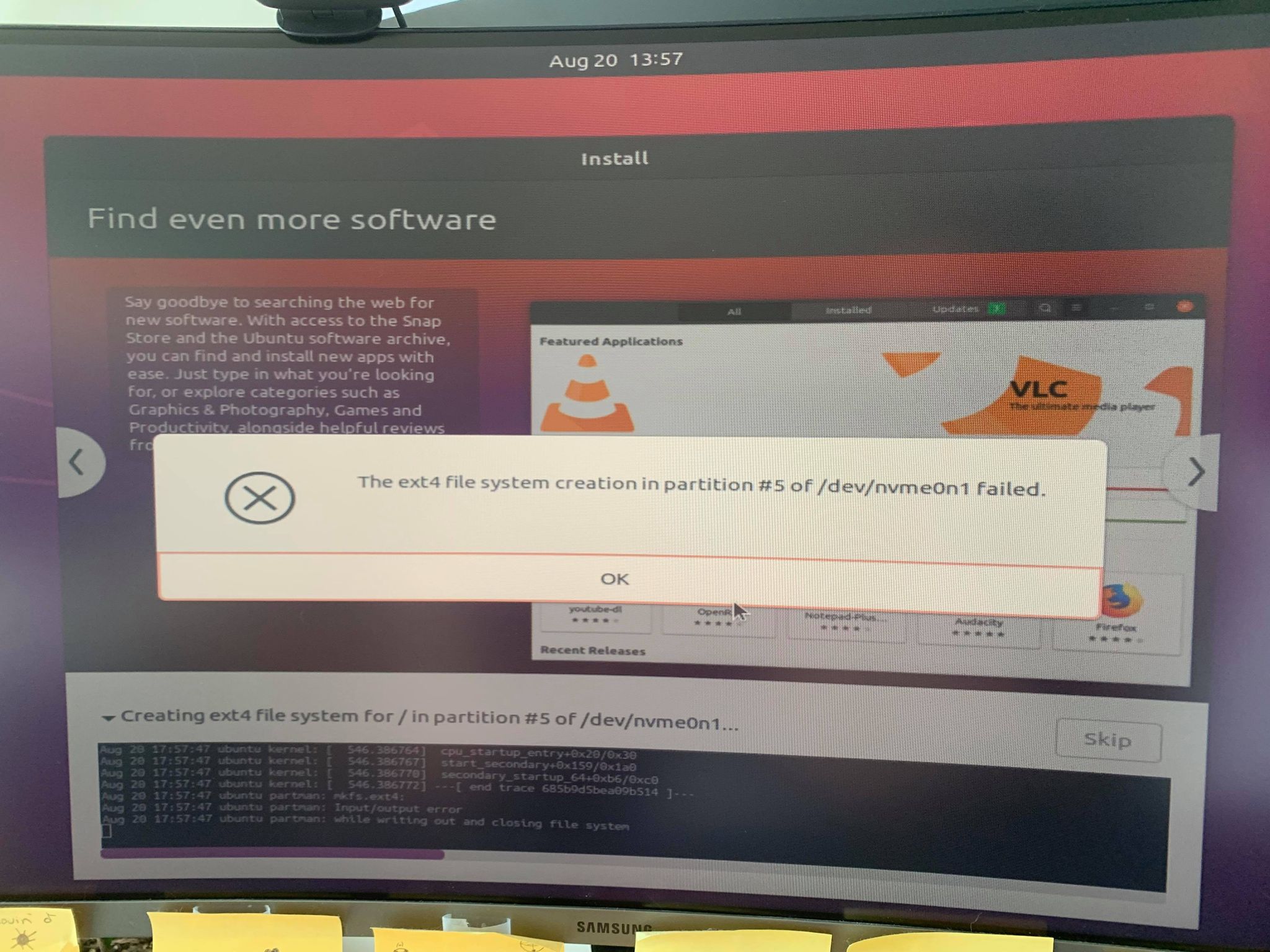 Here is a picture of the error I get when following the first tutorial I mentioned (for Ubuntu 18.04): 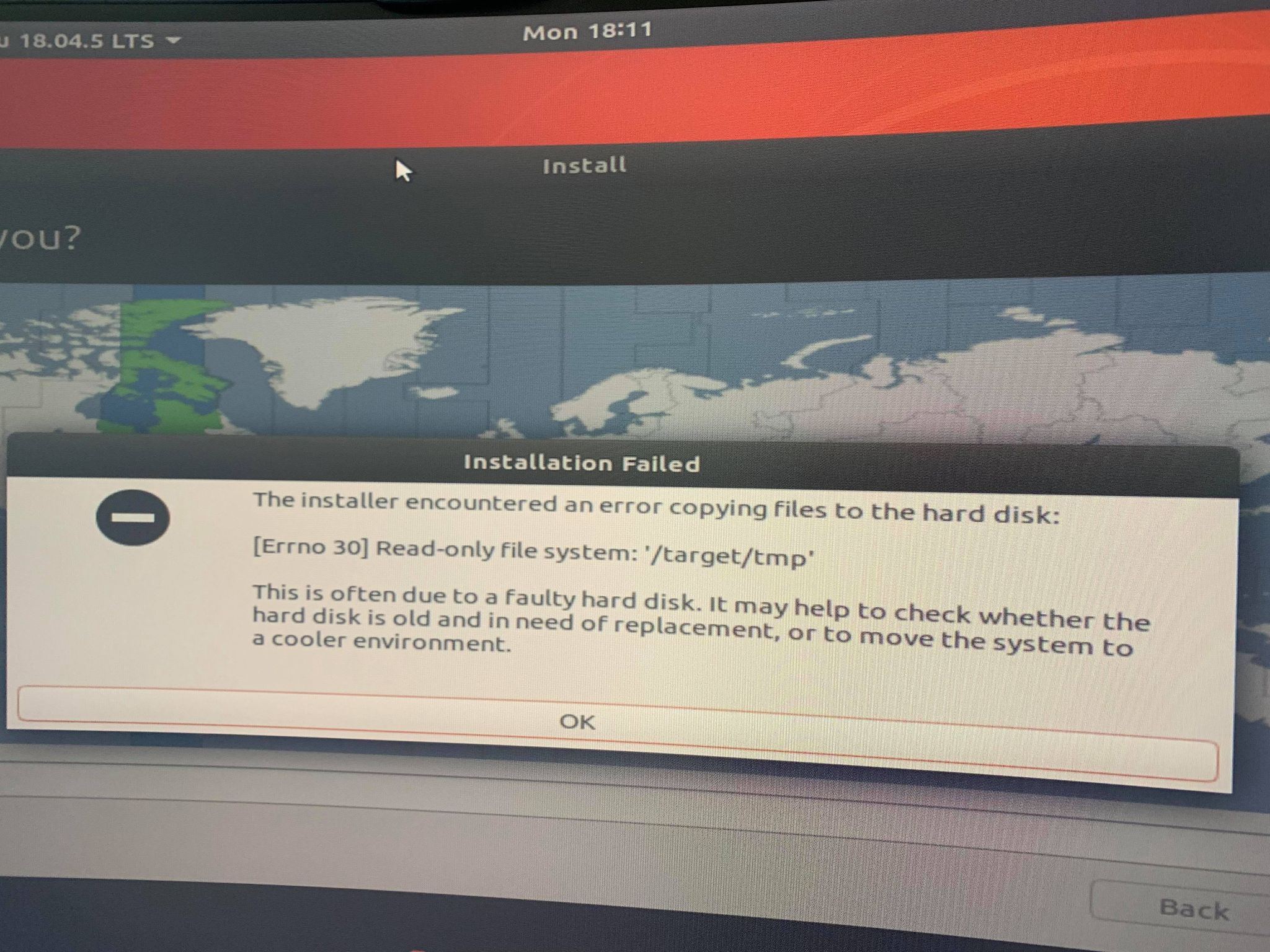 Here is a picture of what happens when choosing to install using "install alongside windows" instead of "something else". The progress bar on the install process gets stuck here, I waited for many hours, the cmd prompt keeps showing new text but I imagine it is in some sort of loop (for Ubuntu 18.04, I partitioned the SSD ahead of time in Windows): 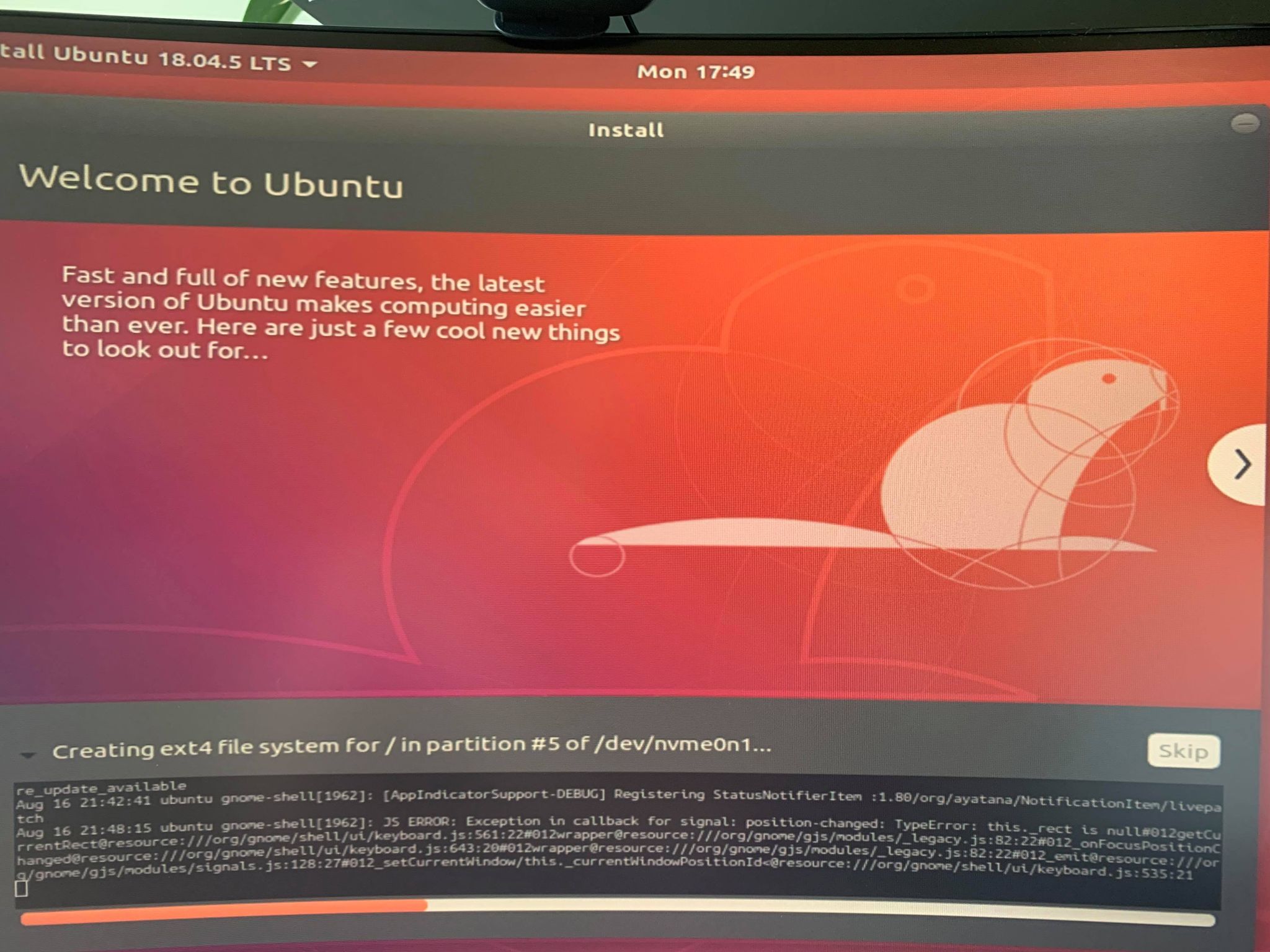 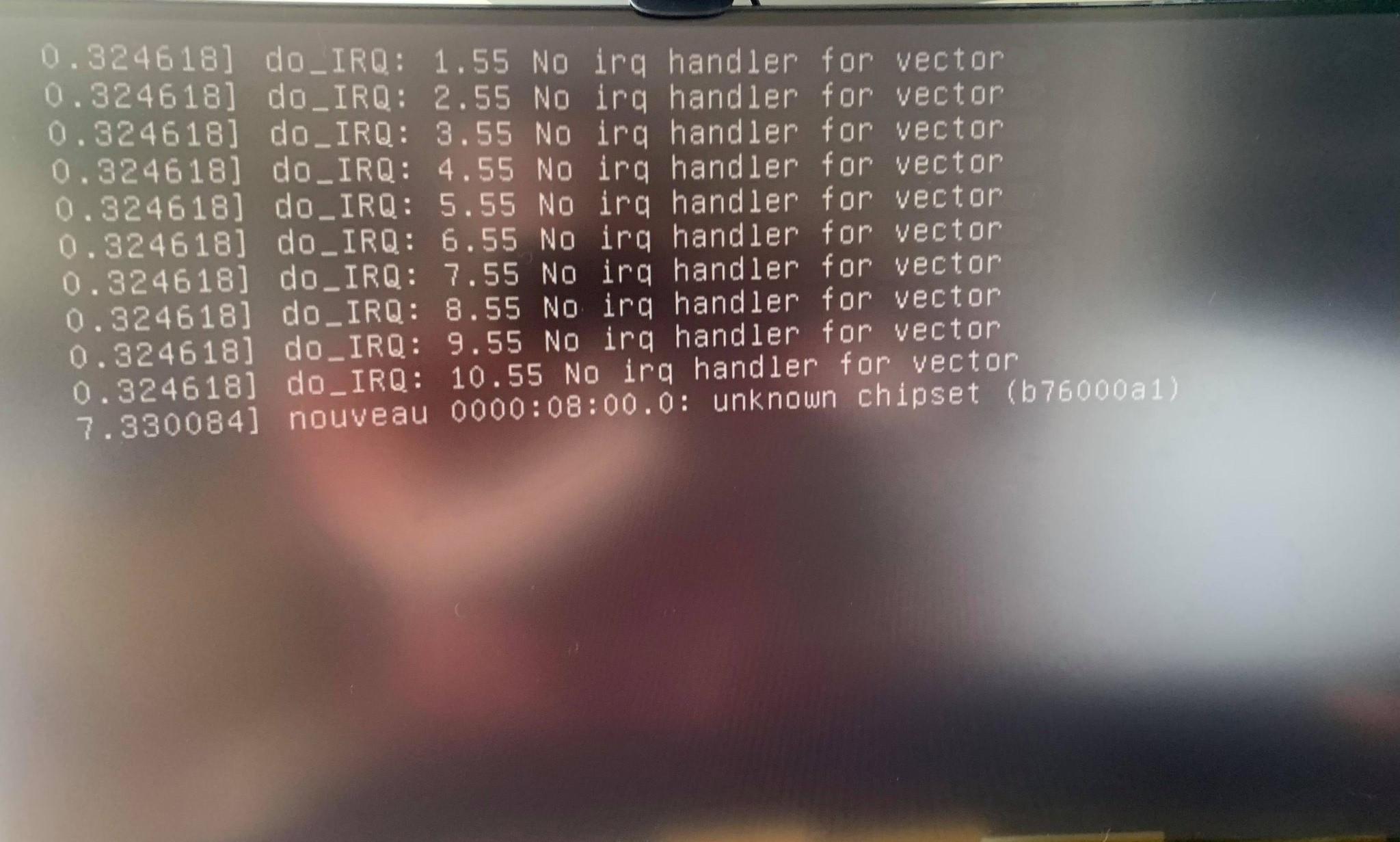 Is there some sort of 'systematic' way of debugging/figuring out what is happening? I have a feeling there is some sort of incompatibility with my SSD, but am not sure. Would an install be easier if I bought a second SSD, and installed Ubuntu on that SSD (so I then have a dual boot with one OS on each SSD). I've tried many different installs, the pictures here are not everything I have tried.

Update 1: I called Lexar support, and they said that Linux commonly has compatibility issues with their SSDs. This makes a lot of sense given the reddit post I linked in my question... I was able to get Ubuntu 21.04 to work with my SSD. That is not the version I want though... so I will likely get a different SSD that is compatible with Ubuntu 18.04. Any suggestions?

Update 2: Although Lexar doesn't have firmware updates for its SSDs, I was able to update my motherboard UEFI. I tried installing Ubuntu 18.04 again, and it still doesn't work.

Browse other questions tagged dual-boot 18.04 system-installation ssd windows-10 or ask your own question.