I've installed Ubuntu 21.04. I've followed a few AskUbuntu guides to no avail. My monitor is connected with an HDMI via an AMD RX 580 (Ellesmere) video card.

I do not have any proprietary drivers installed. As it so happens, official amdgpu-install drivers or amdgpu-pro drivers aren't supported in 21.04. In Ubuntu Software as well I see no drivers for my video card.

I've installed Pulse Audio Volume Control (pavucontrol). Pulse Audio > Configuration > Ellesmere HDMI Audio > Profile displays a list of 18 digital stereo and digital surround HDMI outputs. ALL of these profits have (unplugged) (unavailable) in the end, and none of them are able to bring out any audio.

Below is my alsamixer screenshot which I don't understand - is something muted here? I cannot change the values of the "00" either by + or by the up arrow. 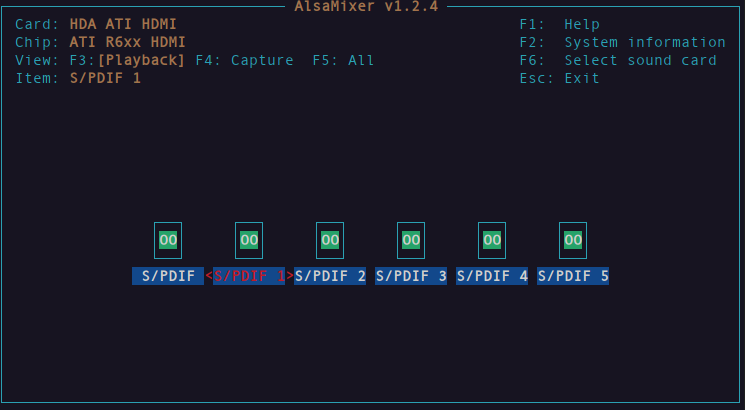 Try wiggling the HDMI cable at the connectors. That's what the problem has been with mine several times over the years. A poor connection. And I have several HDMI cables going to several pieces of equipment. I've learned to check that connection first.

If it's strained in any way, perhaps get a 90 degree connector cable or adapter.

You should probably be seeing a different device available for sound output, something like "HDMI ...", as here. I don't think you should expect handling configuration for an S/PDIF device, in alsamixer or else.

Even the HDMI audio alone seems to work, even if with some things to double check.

I assume you are certain your monitor has audio capabilities. I suggest you post the brand/model of your monitor, plus the output of the commands below. Also, try connecting the PC to a standard TV via HDMI and post what you see.

You might need to install applications you don't have, e.g.