Lubuntu 20.04 Run a script at login which executes in a terminal window

My Goal: Execute a shell script after login which runs with root privileges and takes the appropriate user input from a terminal window to determine its next course of action.

The Script: The script I'm running tells the user that a second script will automatically be initiated in 60 seconds unless the user enters s or S. A countdown displays the remaining time. If the user entered the correct exit command, the script ends and the system carries on as normal. If nothing valid is entered in 60 seconds, then the second script is initiated. The second script needs to also be executed as root (hence why the first one must be initiated as root), since it has a watchdog which executes a hard reboot of the system in the event of a hardware failure.

Purpose: This script is meant to restart a mining program after the watchdog restarts the system in the event of a GPU failure. The user prompt gives me time to stop the miner from executing after login if I want to use the system as normal. I'm usually away from the system, so this is pretty important to keep the mining operation going. GPU failure is fairly common after running 2 + days (despite underclock, undervolt, ect.) for one of my cards as she's getting very old at this point (over 6 yrs).

I've done a good amount of research and have yet to find a solution that has worked for me. Most focus on executing a script which requires no external input or terminal window. If it does, then it's only a few commands. I need something that launches a terminal window so I can see the prompts and the countdown. Additionally, I need the terminal window to display the miner status after it launches.

What I've tried:
Initial Conditions: File is .sh, executable, and owned by root.

Hopefully this shows I put in a good amount of effort and we can find a solution to this issue. Thanks!

The following method should work for you to get a shield start automatically, when your computer starts. Please modify the template files from this answer to match your user ID and the name of the watchdog program file.

Note: I suggest that you do not run the whole scripts as root, but only the watchdog (specifically called with sudo in the second script. This means that you should allow execution with NOPASSWD of the watchdog (set via visudo).

See this link, that describes how to make a program start automatically when the computer reaches the desktop at boot with Lubuntu 20.04.x LTS.

The last line (and a blank line) are added to the default file. Please modify it for your user ID and the name of your watchdog program.

The following links explain how to edit the sudoersfile with visudo:

This worked for me when I tested. You may want to modify the permissions and ownership. But it should not be risky when you limit the NOPASSWD feature to the watchdog program.

When you interrupt it during the grace period before mining:

When you let it start mining, simulated here with parted and dots (.....), and finally stop the mining to use the computer for other purposes: 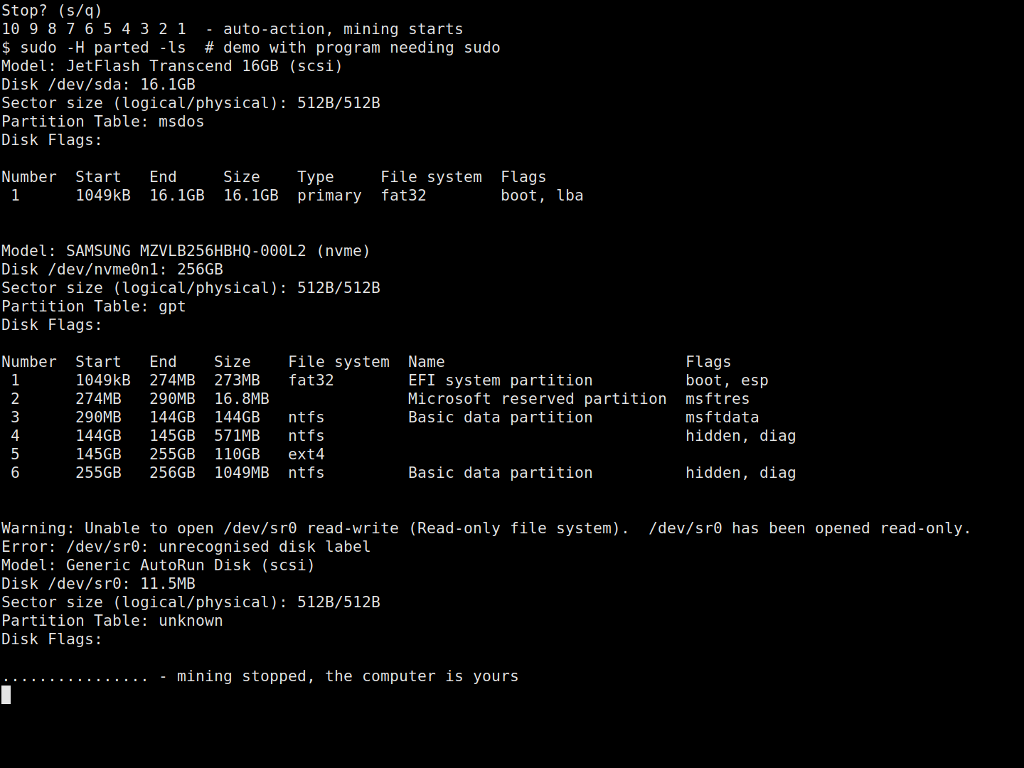 You may want to modify the text size of the xterm window from -fs 16.

Alright, it's been a while, though I finally had some time to sit down and write out my solution. This was my first ever time writing a bash script so it was exciting.

I ended up utilizing a combination of 3 scripts, 2 of which were given root permissions in the sudoers file. Perhaps there is a better way to do this; however, I simply put the full path to the script.

Then under the tab #includedir /etc/sudoers.d

This would set the stage for the 3 scripts to work one after the other without issues.

To start start AutoStartMiner.sh in a terminal window, I utilized the gnome-terminal emulator. For those implementing something similar, you'll need to install the emulator via:

I then utilized the LXQT configuration center and navigated to the session settings. In session settings I set the script StartTerminalASM.sh to execute after the system tray had loaded. This was accomplished by pressing add, giving the autostart function a name, pasting the whole path to the script, including the script itself, and then clicking the box that says load after system tray. It's important to note that this first script does not need to run with elevated privileges, so this method works. The autostart function of LXQT does not run scripts requiring elevated privileges automatically.

Here is the contents of the first script: StartTerminalASM.sh

This script simply starts up the AutoStartMiner.sh in a gnome terminal. Since we added this script to the sudoers file earlier, the sudo command executes without a password prompt.

Here is the second script: AutoStartMiner.sh

So this essentially does as I described in the original question. The only problem it has is that when the time drops below 10 seconds, for some reason, a 0 appears in the 1s place and the numbers count down in the 10s place (e.g. 10, 90, 80, 70, ..., etc). Probably something I don't fully understand about the printf statement that I made. Similarly above, the sudo command here doesn't ask for a password due to the line created in sudoers.

This script simply establishes the parameters for the miner to run. It also executes the miner with sudo, hence why we add a third command to sudoers to ensure no prompt is required to start the miner itself.

So unless the user prompts the system to stop to miner from starting, the miner will execute without any input. This is extremely useful as it saves me a ton of headache if the kernel happens to crash. I simply press the power button and boom, the miner is running one min later. If I really wanted to automate it, I could make a little servo to push the button or set up wake on lan.

That all being said, it's onto the latest problem. After updating to Linux kernel 5.11.0-27-generic, my wireless adapter refuses to connect to my network, though at least it's recognized by the system.

Thanks for the input everyone and I hope this helps other beginners like me one day.

53
How to give nopasswd access to multiple commands via sudoers?
1
Xrandr command in startup script has no effect, but script does run and command work from terminal
1
Autostart issues running simple xrandr script on start up

1
logout current user from script
1
Protect root-owned script against tampering and run unattended w/ sudoers' NOPASSWD
0
rc.local command have user prompt and not run at startup
0
How you do you create a bash script that will run automatically when Unity startups as a user instead of root?
0
What need to be setup for this reboot.sh to run first time after startup?
0
Running sh script on Lubuntu on startup