How do I unbind Ctrl-Alt-T?

After I've upgraded to 12.04, I cannot unbind Ctrl+Alt+T from launching gnome-terminal anymore. I've tried disabling it completely and assigning it to another shortcut in [System Settings -> Keyboard] - nothing helps, Ctrl+Alt+T still launches terminal. Any ideas how to get rid of it?

BTW, this breaks Ctrl+Alt+T in gnome-terminal itself, which is supposed to open new tab, but instead fires up new window.

Also, on a side-topic. This "shortcut hell" has been a problem since introduction of unity. Shortcuts are now configured in two different places. Every release they add/delete/change shortcuts - so I basically have to go and figure out how to disable/remap the ones that I use in my IDE. Now, it seems, you can't disable them completely (e.g. Alt + `) and have to override with another shortcut to unbind the default one.

What I'm really trying to ask here - does anyone know if there is a launchpad bug to fix this kind of behaviour, so I can vote \ track it? Or should I just create new one and see what happens?

I found this to work for me to disable to keyboard shortcut for running a terminal:

Pictures of what it should look like in both the Configuration Editor and System Settings area. Hope this helps! 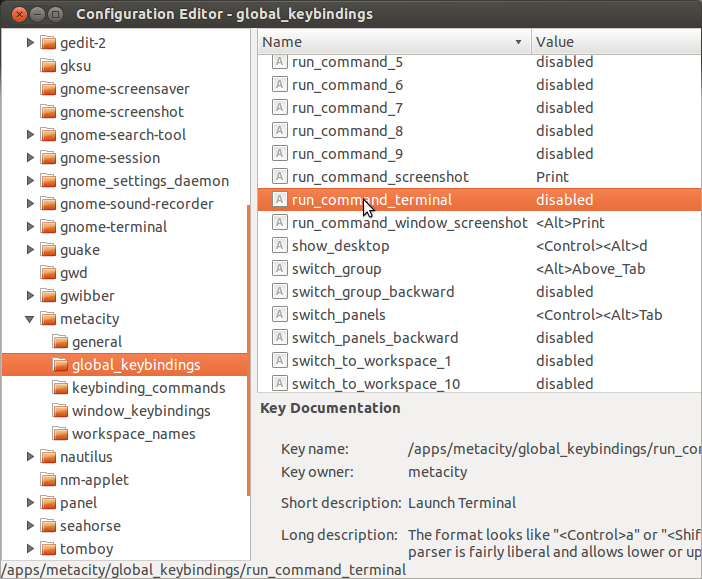 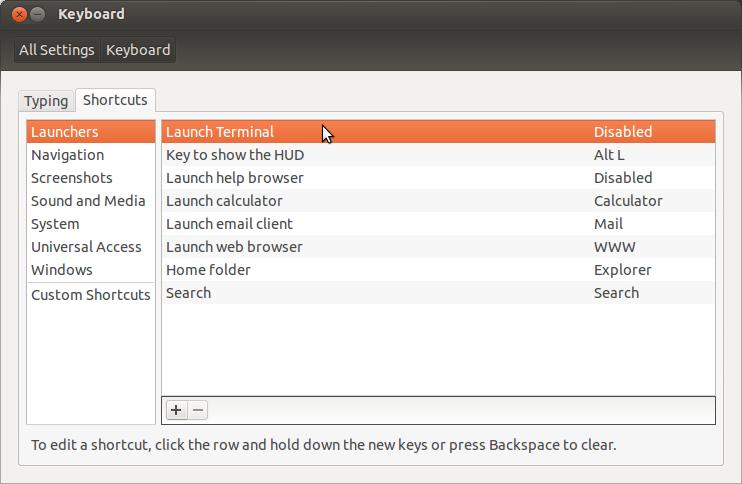 On current Ubuntu metacity is no longer the default window manager, so the accepted solution no longer works. Instead there's a different setting that you can change. Set the key combination to an empty array.

To undo the change again

In case this changes again, I found this by looking for all settings that mention "terminal"

I had this problem because it interferes with an Emacs keybinding to transpose sexps.

Alepar: Look into "Custom Shortcuts" in Settings/Keyboard (seen in the ruffEdgz' answer). I had the same problem; I could not remove the custom shortcut, but it was possible to rebind it so that it did not interfere with the IDE.

Also, for anyone looking for a more updated answer, or an answer for UbuntuMATE, Go to Config Editor, and look for the following:

And change exec to whatever application you like and remove exec-arg, this changed the bind for me because I used terminator, I'm not sure what else that changes.

4
How to disable the "roll up" / "shade" keyboard shortcut in Gnome 3 (after upgrading to 12.04)?
7
Keyboard Shortcuts to switch directly to applications
3
How do I disable <Control><Alt>S to allow myself to launch Sublime?
18
How to make the keyboard shortcuts like macOS on Ubuntu?
4
Probelm with shift+alt+down or shift+alt+up
5
ctrl-alt-t opens new terminal window instead of new tab while gnome terminal is active window