I am trying to find a way to automate launching a shell script after Xubuntu logs in.
I've checked numerous other questions and answers and have still not found a way to do it.

Here is the script that I am trying to run:

It is a script based on the Linux CapsLock Delay Fixer that modifies the caps lock key to behave like it does on Windows platform so that it can be used to capitalize while typing fast. 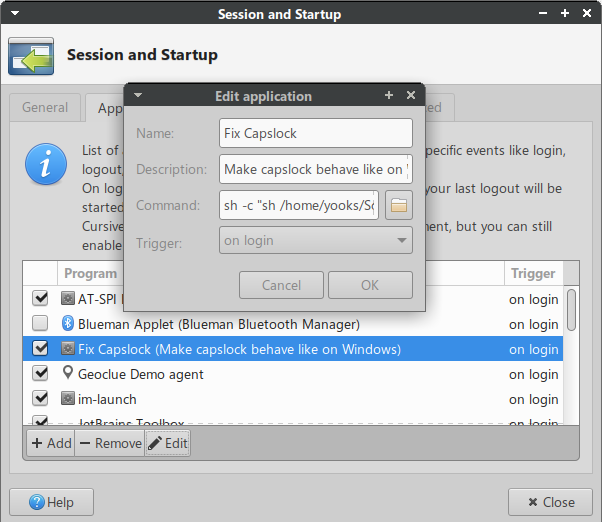 Here are the things I've tried:

The script executes fine when I run it from terminal on any path.
What is the easiest way of making this script run whenever I login to Xubuntu?

Depending on what DM (Display Manager) you are using will determine what the $DISPLAY is set to. Since your script is actually running without a shell at the time of login, there is no $DISPLAY set. To remedy this, you may want to add the following lines below the #!/bin/sh line in your script:

Not the answer you're looking for? Browse other questions tagged scripts xubuntu autostart or ask your own question.

6
How to remap CapsLock key to Ctrl in Xubuntu
5
running gnome-terminal with no window border on startup in xubuntu 12.10
3
How to create (via installer script) a task that will install my bash script so it runs on DE startup?
0
xdotool, open and close Unity Dash on startup
1
Run script on next reboot and remove script
1
Can scripts be run directly from the ~/.config/autostart folder?
1
Pass/set `current directory` to/for a shell script from Java in Ubuntu 16.04
1
xkbcomp at startup in kde