What's the difference between dash and dock?

I've seen a lot of talk about the Dash to Dock extension, but I'm really struggling to see the difference between dash and dock.

As someone who also has extensive experience of Mac, it seems the OSX dock has almost exactly the same functionality as GNOME dash.

What am I missing?

A GNOME Shell extension, "Dash to Dock" can turn that Dash into what from then on is referred to as a Dock on your desktop. Then, it is directly available on your desktop, and thus behaves much more like a dock in for example MacOS.

In a default Ubuntu install, a custom GNOME Shell extension, Ubuntu Dock, is active. That is actually derived from "Dash to Dock" and uses the same configuration settings. So you already have the "Dock" instead of the "Dash", and do not need to install an additional extension for that.

I'm as uncertain as you, but this seems like an opportunity for clarification.

This I know is the dock:

Then there is this group of screens:

I originally assumed (perhaps inaccurately, as revealed later), they together are making up what's called dash.

I arrived to this conclusion partly through my memories from using Unity. In Unity it was more clear, because it occupied only the top left part of the screen, and had this distinct border, and of course it needed a name, and got named dash. And in it, you performed the same tasks as you now do in these screens.

I also tried to verify this theory by doing an image search for "Unity dash" and "Gnome dash"; the results didn't seem to contradict. 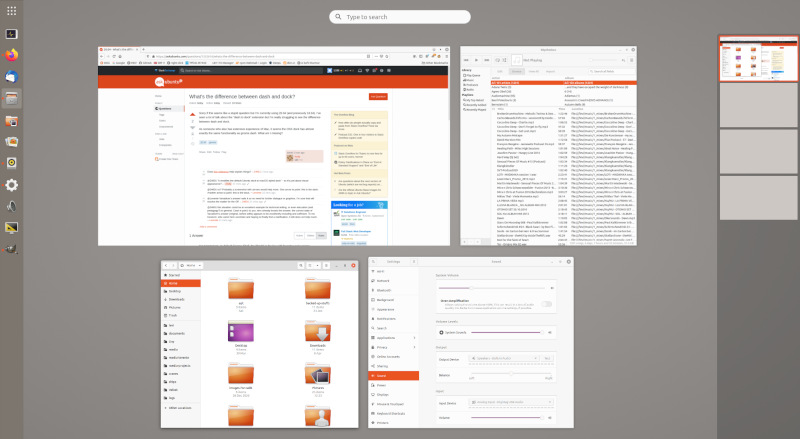 The unexpected tale of the gnome shell extension Dash to dock:

What we need to establish first, is that Ubuntu is not responsible for much of the Gnome UI. Gnome is a third party "software foundry", whose software (the part responsible for the UI, gnome-shell) gets used by Ubuntu.

But of course, Ubuntu needs to carry out some customizations to gnome-shell before they can present the entire release to us. Even Ubuntu is using gnome shell extensions to achieve some of this (as opposed to trying to maintain an Ubuntu-favoured gnome-shell fork).

Now, thanks to Vanadium's answer, cursory findings from my earlier, briefly relevant experimenting, and the annotated illustration in the referenced gnome-shell Wikipedia post, I have put it together:

In the original unmodified gnome-shell (without the Ubuntu distro's customizations), the part we in Ubuntu know as Dock,

The gnome shell extension Dash to dock (shipped with and enabled in Ubuntu by default) "extracts" this subcomponent (at that point, still called Dash) out of the Activities Overview, sticks it to the edge of your desktop permanently, and invites you to refer to it as Dock from then on.

The difference in terminology comes from the fact that the "dash" only appears when you are in activities view (i.e. press the super key), but the "dock" is there all the time.

Thanks to the other answers and comments - I hope I have summarised the situation correctly.

7
How to create a desktop icon for an executable?
4
Where are gnome-shell's UI javascript files on Ubuntu 20.04?

6
Using the "dash" from Unity interface in classic mode?
33
How can I add "Show desktop" to the GNOME dash or Ubuntu Dock?
7
What exactly do dash-to-dock intellihide and intellihide-mode dconf variables do on GNOME 3?
9
(xRDP) Desktop looks different when connecting remotely
2
No app in ubuntu dock
3
Dock in Ubuntu MATE (*not* GNOME 3) hides behind full-screen apps