With GIMP, how do I hide all layers except the current one?

Is there a way to hide all other layers when you click on the 'eye' symbol ? It's like what Macormedia Flash does , display only the layer that you click on , all else is hidden.

Is there a shortcut key ?

Shift+ Click on the eyeball, on the layer you want to remain visible.

Gimp 2.8 will still toggle visible layers using Shift+Click on the eyeball, but now with layers within Layer Groups Gimp will respect layers that are invisible, or visible within a Group, There is a discussion here by developers - 1

What this means is that when you make a layer invisible within a group, it will stay invisible when toggling visibility of other layers and groups.

Before toggle and after toggle, I am toggling the visibility of the layer pointed to by the red arrow- 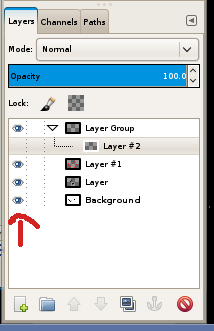 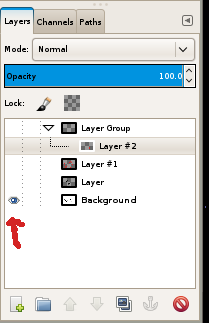 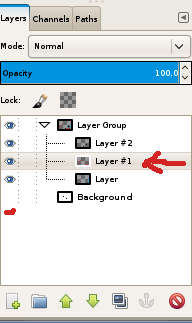 Notice that I am toggling the visibility of the layer pointed to by the red arrow, yet only the layers outside the group are affected.

I have not found any workarounds for this behavior yet.

Press Ctrl+L and unselect layers that you want to hide from the dialog box that appears. This works in Gimp 2.8

4
Is there a way to change the formatting of a single word in GIMP?
4
Anybody know how to get the eyedropper tool to work in the GIMP when running Ubuntu 11.04 in Virtual Machine from 7?
4
How to install an application like gimp from terminal and install all the available plugins showed in software center?
212
How to make Gimp run as a single window?
1
Gimp: How to change layer effects once added? For example change drop shadow values
7
Layer and toolbox window doesn't appear when I reopen GIMP after closing it using the launcher
2
How do you clean up a text background with Gimp?
7
How to move all vertical scrollbars to the left side?