How did I obtain the "Extensions" app?

I do have an app that's called "Extensions": 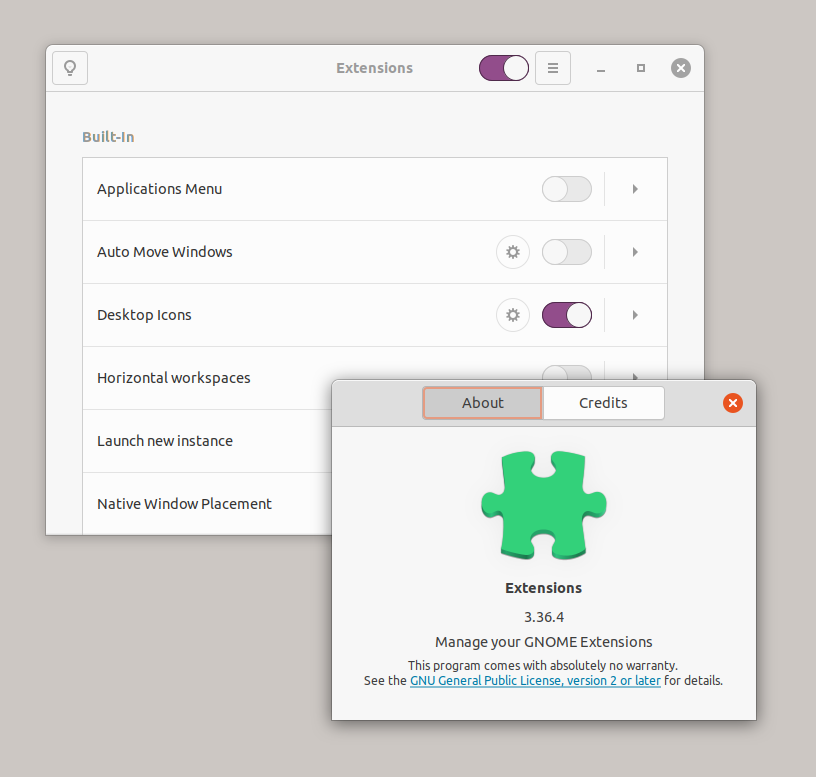 I ask this because Extensions seems to take precedence over what is being set in Gnome Tweaks' Extensions tab.

This makes it difficult to offer definitive help regarding managing gnome shell extensions, since the results seem to depend on the presence of this app.

This is a utility of the Gnome Shell developpers. It's homepage is reported by apt show to be https://wiki.gnome.org/Projects/GnomeShell. It is a package of the Universe repository, and is not preinstalled. It can be explicitly installed through the package gnome-shell-extension-prefs, but it may also be installed along with the official Gnome Shell extensions, gnome-shell-extension, for which it is a recommended package. In Ubuntu, apt is configured to install recommended packages by default.

As I have learned from @vanadium's answer, the app is called gnome-shell-extension-prefs.

Trying out Ubuntu in a live USB session, the app was not present initially.

After adding the Universe source, I have run

From this, it seems safe to assume that anyone who has Gnome Tweaks installed, has the Extensions app too.

Which is all the more weird, because as I have found, Extensions can override Tweaks, and at that, without any hint: settings in Tweaks will simply not take effect, if they conflict with settings in Extensions.

I remember, in the beginning (when I did not have yet gnome-shell-extensions), being able to enable/disable the Desktop Icons extension with Tweaks.

It was only later, at some point in time, that (re-)enabling Desktop Icons became impossible through Tweaks. (Because then it had to be done with Extensions.)

Between these two experiences, I'm aware of two things happening:

Somehow I still think that with the above, I have disqualified myself from reliably assuming how other people's shell extension preferences work...

Not the answer you're looking for? Browse other questions tagged 20.04 gnome-shell-extension or ask your own question.

43
Installing suggested/recommended packages?
25
Ubuntu 20.04 desktop files and icons missing
7
How to create a desktop icon for an executable?
1
Where are gnome-shell's UI javascript files on Ubuntu 20.04?

1
Gnome shell system extensions
1
Lock screen blur missing in 20.04
4
How to install gnome extensions from gnome software?
2
Unable to install GNOME extensions on Ubuntu Budgie
1
In Ubuntu 20.04, I cannot get the displayed time on top bar to show day, date and time including seconds
0
How do I install global Gnome Shell Extensions in Ubuntu 20.04 LTS