Chromium is deleting my linked profile

I have updated my system or my system was updated automatically. After relaunching Chromium (implicitly via snap), Chromium shows an error message about my profile and deletes it. The text of the error message is (see also attached screenshot):

Profile will be deleted

Your account username@company.com is no longer allowed as the primary account. Because this accoutn is managed by company.com, your bookmarks, history, passwords, and other settings will be cleared from this device. 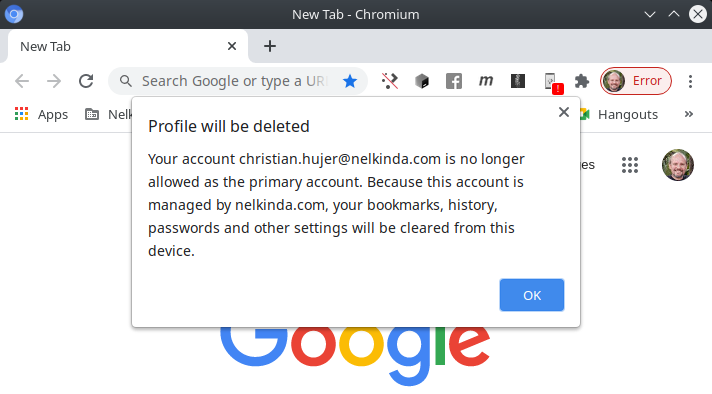 I am the owner of the account, and I can confirm that no settings or changes to the profiles have been made. What is going on?

I fear this is the consequence of an announced google chrome/chromium change, and cannot be corrected (in fact more API functionality is being removed in the not too distant future) and this is just the start of the changes announced with https://developers.google.com/web/updates/2020/12/chrome-88-deps-rems)

Or as Olivier Tilloy (osomon) ; a Ubuntu developer reported

This is an unfortunate consequence of a decision by Google to restrict access to the sync API to Chrome only (which explains why in comment #3 you're seeing that chrome 89 on linux works fine).

I am quoting the part that's relevant for end users:

« What does this mean for my users?

Users of products that are incorrectly using these APIs will notice that they won't be able to log into their Google Accounts in those products anymore.

As always, users can view and manage their data through Google Chrome, Chrome OS, and/or on the My Google Activity page, and they can also download their data from the Google Takeout page, and/or delete it from this page. »

I'm afraid (and sorry) there's nothing that can be done from a packaging perspective to mitigate this regression. Reverting the snap in the stable channel wouldn't help, because it's not a version problem. The official announcement states that starting March 15 attempts to log in will fail anyway.

I suppose that users that can't do without the profile sync feature will need to move on to using the official chrome package distributed by Google, instead of chromium (which is probably what Google wants, really).

before closing the bug report with "Won't fix" (so Blame Google)

There seems to be a bug in the latest snap for Chromium. For a bug report, see https://bugs.launchpad.net/ubuntu/+source/chromium-browser/+bug/1917705

Note: Reverting to the older version of Chromium will not bring back profiles that you have already lost due to this bug. You will have to create and link them again.

Warning: Reverting to an older version of Chromium may come with its own issues, such as security risks.

Not the answer you're looking for? Browse other questions tagged snap chromium or ask your own question.