Having bought a new motherboard & CPU, I did a clean install of xubuntu 20.10 yesterday which fixed a number of small bugs but has caused a strange one: My second display is an LG TV connected by HDMI:

And looks right in xrandr: 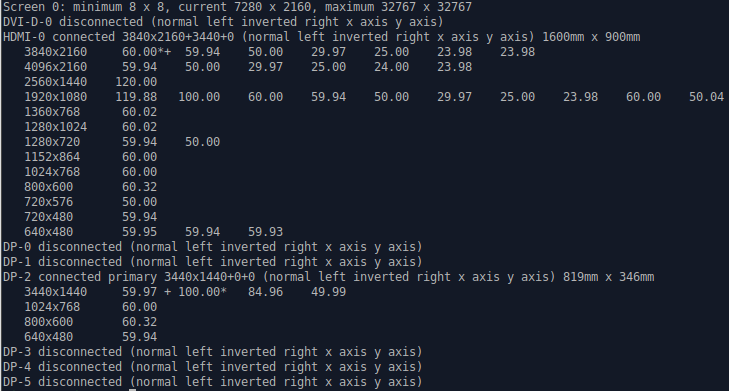 The display output seems to be extended to this display based on the fact that I can drag my mouse off the primary and it goes a long way (sounds dumb but you know what I mean). BUT: on the TV, it says no HDMI is connected. I haven't touched the cable since yesterday so it seems unlikely to be a physical cable connection issue. MORE weirdly, if I mirror displays, the HDMI signal IS detected by the TV and it turns on. It looks garbage but proves the connection is viable. Weirder still, back on normal extended mode, if I set the audio output to the HDMI (rather than displayport to monitor1), sound WILL come out of the TV system. But no video. So signal will go from PC to TV via HDMI cable in mirrored and extended mode... just not video.

I've tried with Xserver/nouveau/whatever it's called, and Nvidia display adapter. No change. Weirder still, the same seems to happen in my dual-boot win10 install.

Any ideas for how to solve this? Maybe unplug the HDMI from both ends, reboot both PC & TV, plug in PC, plug in TV, retry?

Also, since I first plugged in the TV a few months back, my login screen display settings are a janky mix of the resolution of both displays: normal box size, big mouse cursor size, and often takes a while to force it to select the form field: 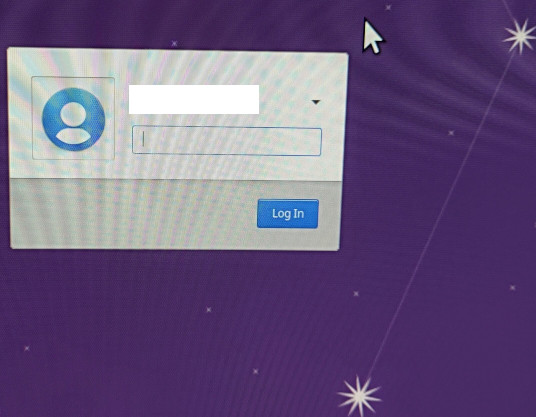 Any ideas for this also appreciated. Thanks!

Edit: I shut down the PC, removed the HDMI, and booted up. Login screen weirdness gone (unsurprisingly). Plugged in HDMI, TV detected, automatically gets placed as display1 in 'semi mirrored' mode where the screens are overlapped. Click 'mirror displays' to make actually mirrored. No change. Click again to make extended. No change. Unplugging & replugging the HDMI at the TV has the same result: overlapping screens when first detected, TV as display1, no effect from 'mirror displays' button.

I believe there's a Nvidia hardcoded rule that says primacy order of connected displays is VGA, HDMI, DP. Not sure whether HDMI being before DP is relevant to this case (given it's the likely reason the TV is assigned as display1 when both are connected).[edit: TV being display1 would explain the oversized login screen box]

Highly unproductive & slow online chat with Asus. Win 10, in powershell $env:firmware_type returns UEFI so it seems windows was installed in UEFI, & msinfo32 says it's booted in uefi also, so CSM boot mode isn't in play so that idea is dead.

PCI-E slot issue? (I think only the first slot is 16x but I might be mistaken) [edit: no benefit from PCIe3 slot, see below]

"It may be with the GPU drivers or windows itself. You may try to clear CMOS and also update the BIOS for further troubleshooting."

Just watched an old AVI movie on the TV @ 2880x1620 on xubuntu, and it would cut to black every so often, intermittently, more by the end of the movie than the start. Nothing wrong with the file when playing on the primary monitor.

Ryzen 5 5600x doesn't have integrated graphics. So although my mobo has an HDMI port & supports HDMI 2.1 @ 4k 60Hz, I can't power that from the CPU so game over on that front.

PCIe slot summary: PCIe3 conferred no benefit and produced 95% the FPS output in GPU benchmarking compared to PCIe4, which is a hit I'd maybe be prepared to take if the HDMI output to TV worked, which it didn't. In Xubuntu I can run native res @ 30hz, or max 2880x1620 @ 60hz. Win10 runs nothing except a dull & occasionally flickering display at low res with interlaced refresh rate, or turns on & looks normal for a millisecond, then off for a while, then no signal, then repeat. Two biggest takehomes thus far:

Edit: something from another page, probably not helpful but will test later: "if you recently upgraded to Windows 10, it upgraded your HDMI output to 2.0 too. If you have an older monitor, then it’s most likely not compatible with it". Monitor is new LG TV 2021, very likely compatible. GPU is 1080ti, presumably compatible. Ditto cables. Remember gpu + cable + tv + win10pro all worked before.

Solved thanks to Asus tech manager:

Not the answer you're looking for? Browse other questions tagged nvidia sound multiple-monitors display hdmi or ask your own question.

2
Dual monitors will only display in mirrored mode; How do I configure the second one as an extended desktop?
1
Unsupported resolution when connected with HDMI
0
Ubuntu 16.04; external monitor; after reboot, no longer working as dual monitor, only working as mirrored
0
Second monitor not being detected on Ubuntu 16.04 / XCFE desktop
1
Change audio output via command line
1
18.04 sees both Titan RTX GPUs. Why does only one monitor display?