rEFInd & Linux kernel EFISTUB booting at Apple hardware, how to implement it?

The very best method would be a Linux distro which natively includes an install option for EFISTUB via rEFInd. Unfortunately this doesn't exist. Even the rEFInd supporting Manjaro Linux installer is using for booting the Linux kernel a grubx64.efi file (which is loaded by rEFInd). That really doesn't make a lot of sense. (It effectively makes absolutely no sense.)

Well, in a lot of cases, native EFI booting via GRUB is working fine also for Apple hardware. However, there are some situations where that is not possible. I am thinking in particular of all the Apple models which doesn't continuously expose the video BIOS in native EFI mode. For example, this is true for all non-MXM based (earlier & later) models which doesn't contain an Intel GPU but still have a separate GPU chip. On such Apple hardware, the video BIOS is embedded in the main EFI firmware and not in a separate flash chip (like at the MXM GPU cards). Addition: It turns out that this problem is also present at certain Apple MXM GPU cards.

While the vBIOS information is in legacy CSM BIOS emulation mode (aka Apple boot camp) always present and accessible, it is NOT under native EFI. So, when Linux is booting in EFI over GRUB the kernel is unable to reach the vBIOS information and cannot proceed with KMS (kernel mode-setting). On Radeon GPU based systems this results in an *Error* No UMS support in Radeon module! message. Source: Linux issues on iMac11,2

Confirmed (incomplete) list of Apple models affected by "vBIOS not exposed in EFI":

So far, my intended steps are:

This topic becomes even more complicated because of Apple specific EFI restrictions. At a regular UEFI environment, the steps described here How to boot load the kernel using EFI stub (efistub) loader? (See the SECOND answer) would allow a migration to EFISTUB kernel booting.

However, Apple EFI firmware based systems requires some additional modifications. A further limitation is that Linux runs during the first phase in CSM BIOS mode. As a consequence, the step "Add the boot entry" (with efibootmgr) cannot be applied. This must be done later over the EFI Shell (outside of Linux).

The following steps describe how a regular EFISTUB booting from the stock Apple EFI firmware is established.

Finally, make a reboot, install rEFInd from CD, boot into it and launch the EFI shell. The last step establishes the boot entry in the stock Apple EFI bootloader. This is not absolutely necessary when only rEFInd is used as bootloader. However, in that example here the command would be:

Regarding rEFInd this results now in a configuration in which two vmlinuz.efi boot options exists. The first is located in the esp partition sda1 and can be loaded directly from the Apple stock EFI loader. The other one is located in the root partition sda4 (or in its boot folder). That second vmlinuz.efi can be loaded from rEFInd but not from the stock Apple loader. Conversely, rEFInd seems unable to load the first vmlinuz.efi file without additional information regarding the root partition. (The boot process will hang and a BusyBox shell will be displayed.)

Optional further steps, only necessary on restricted "vBIOS not exposed in EFI" systems:

As mentioned at the beginning, it is sometimes necessary to start only the bare Linux kernel (without the "vmlinuz loader") directly from rEFInd to avoid tough problems like the "vBIOS not exposed in EFI" issue. In this case, the kernel must also have an efi extension. This requires a manual adjustment because the kernel name changes with every kernel update. The syntax may look like:

In some situations it may be necessary to delete the previously generated vmlinuz.efi file. But i recommend to try it first out without deleting it.

Last of all, if everything works as expected the esp partition can be auto-mounted in fstab with the following command. (This is needed for the hook to updated the kernel loader files automatically.)

All suggestions for further improvements are welcome! ;-) 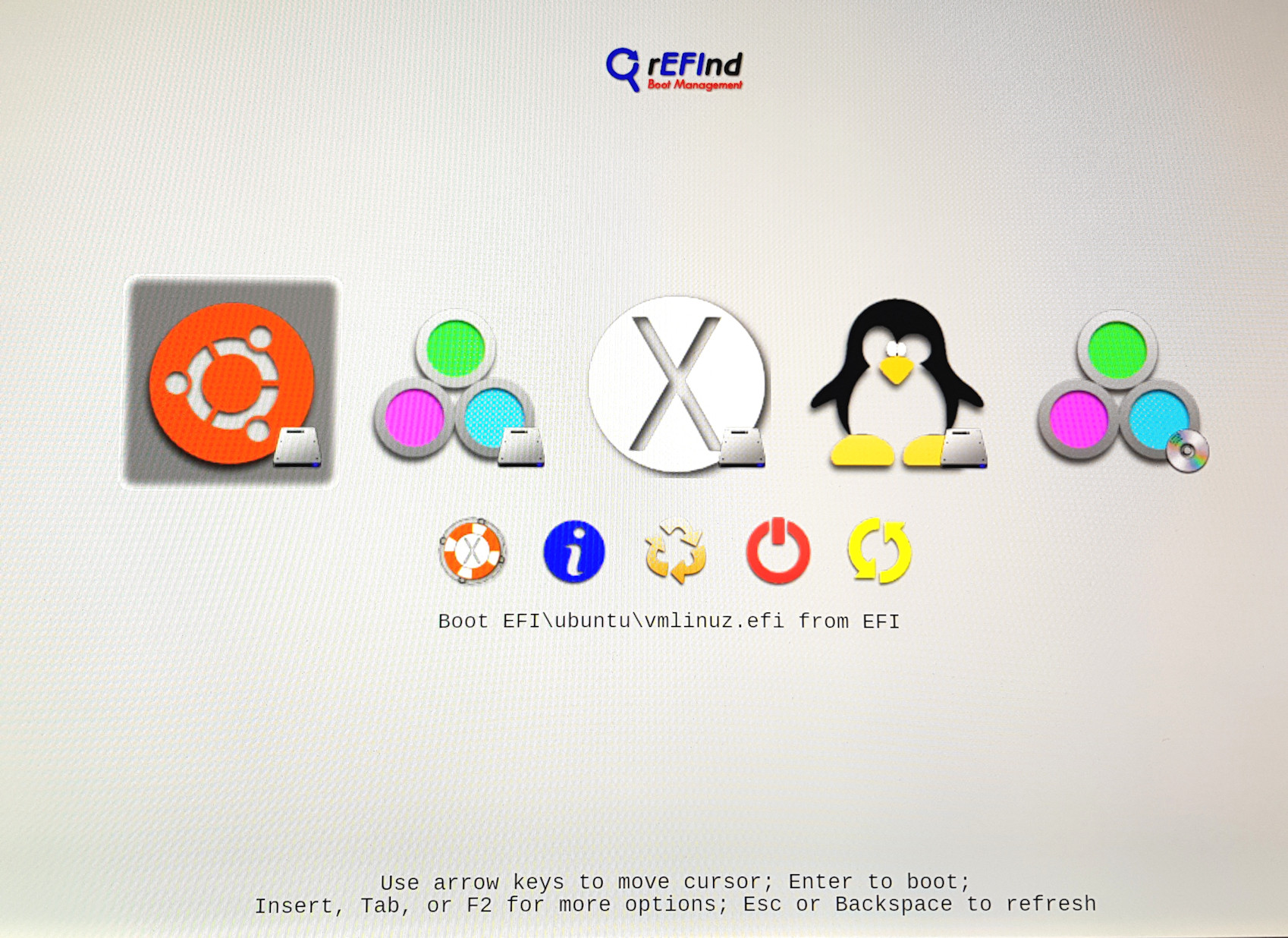 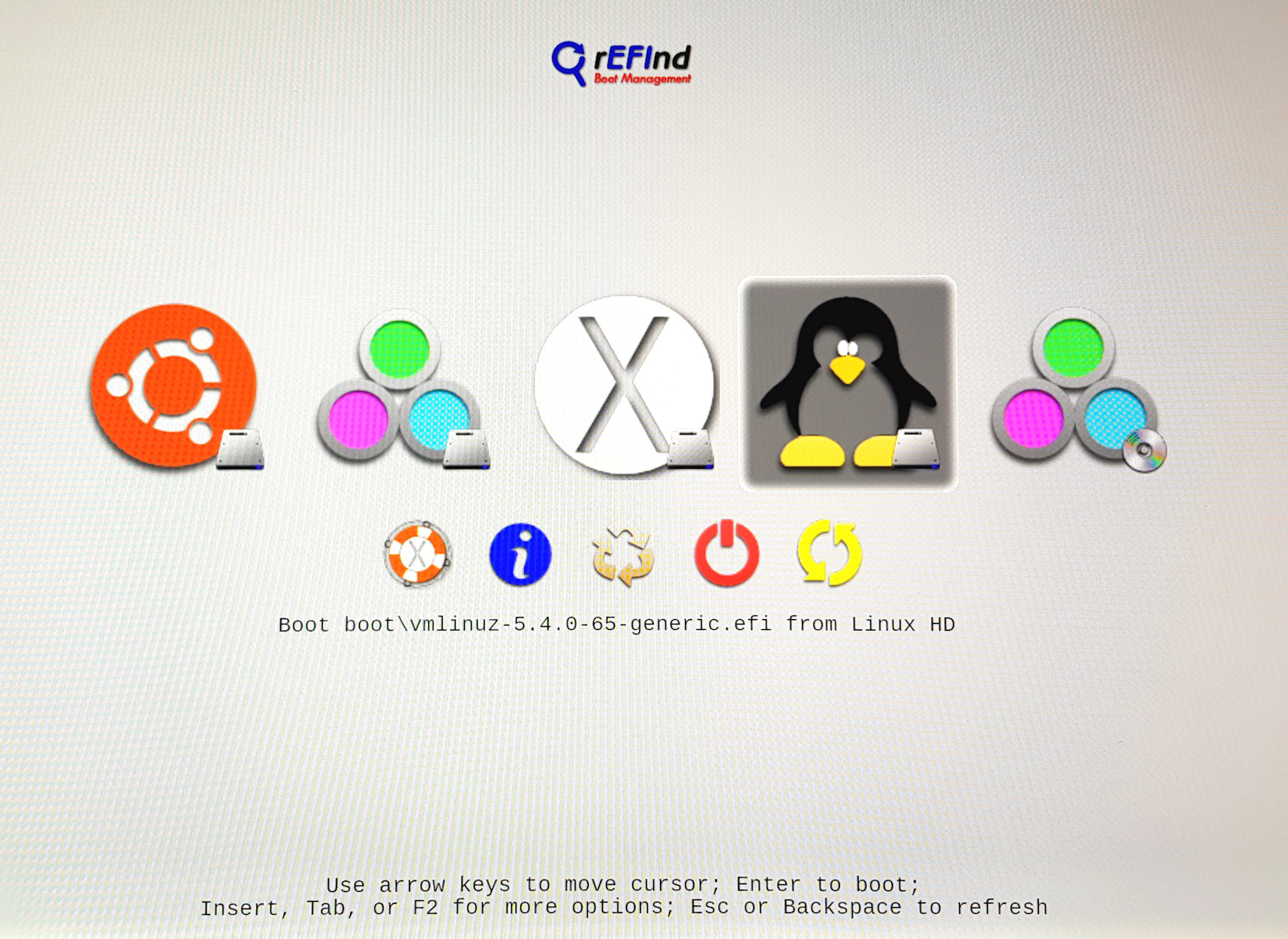 More recent (K)Ubuntu versions includes a not much noticed EFI boot option called safe graphics. Behind this stands the more or less known nomodeset GRUB parameter. In older times this option mostly resulted in booting to a CLI command prompt, no graphical UI (X-Server) was available. However under an EFI environment that option enables the booting of X with basic "UEFI resolutions". These seems to be defined along the UEFI GOP (Graphics Output Protocol) specification. (https://wiki.osdev.org/GOP) To some degree the working principle of the safe graphics option corresponds to the "Microsoft Basic Display Driver" in newer Windows versions.

Long speak short, this nice little option enables a minimal X "emergency booting" also on very restricted "vBIOS not exposed in EFI" systems. :-) Well I have not tested this at an iMac11,2, but I can confirm that this works GREAT at an iMac11,1 which contains a Radeon HD 4850 GPU.

Whatever, this awesome option has the potential to again simplify the topic described here. The installation steps will look as follow:

Note, if someone needs to install just the bare Linux kernel booting, the following steps can be skipped (for the moment). Please check first the section "Optional further steps".

Because (K)Ubuntu is running in EFI mode, we can config the additional EFI related booting stuff directly without any additional steps. The example here uses the regular EFI path syntax.

The following steps describe how a regular EFISTUB booting from the stock Apple EFI firmware is established.

As a final (optional) step it would make sense to completely remove GRUB and Shim. Update: Unfortunately these two packages are installed again and again automatically by (K)Ubuntu. If you really want to get rid of them, then it is necessary to blacklist the GRUB and Shim packages manually. The following command would uninstall these two packages including the corresponding config:

To verify the boot order enter sudo efibootmgr -v at the CLI. The "Ubuntu (efistub)" is in my case entry "Boot0002". It should be set as the first one, before any other. This can be done at the CLI for example with sudo efibootmgr -o 0002,0000,0001. But be aware, Mac OS sometimes defaults the boot order again back to itself. So the most save option is to install rEFInd permanently as already described. This will by-pass all generic Apple EFI and GRUB boot principles. As an emergency boot option, a rEFInd CD or USB flash drive can be additionally used if the installed rEFInd fails.

Take a reboot and check if everything works as expected. :-D

Optional further steps, only necessary on restricted "vBIOS not exposed in EFI" systems:

To establish a bare Linux kernel booting directly from rEFInd, the following command is required. It is very important to understand that this requires an ongoing manual adjustment because the kernel and kernel name changes with every kernel update. So check first out which kernel version is present! ;-)

In some situations it may be necessary to delete the previously generated vmlinuz.efi file. But I recommend to try it first out without deleting it.

As the last step it is recommended to install the rEFInd PPA. This will automatically update rEFInd to the newest release. Regarding (K)Ubuntu this can be done quite easy through the official rEFInd PPA from Roderick W. Smith:

Alternatively it is also possible to skip this step and boot rEFInd always from CD.

That's it! Reboot the Mac and choose in rEFInd the Linux kernel (with the efi extension). K(u)buntu should now boot fine also on systems which doesn't expose the vBIOS under EFI.

And by the way, an auto-mount entry (of the esp partition) in fstab isn't required. This is already configured because (K)Ubuntu was installed from the beginning in EFI mode.

No, if you're trying to run something from disk (.img), you should use the path to the options structure.

In addition, you do not mention the disk formats, which is important.

In standard mode (unpacked), the following should be written on your screenshot...

The other axes should not have ext4 format, and you should specify the options or .efi file for axes. 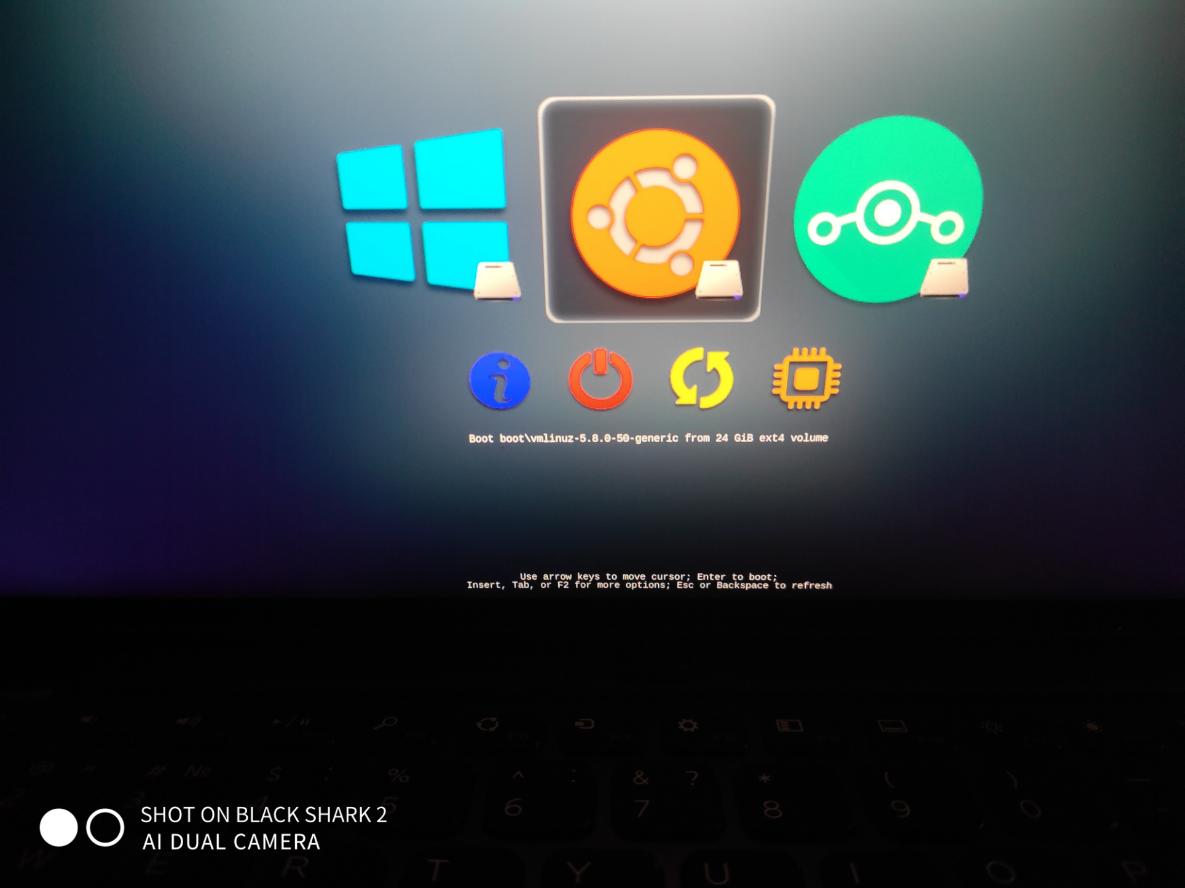